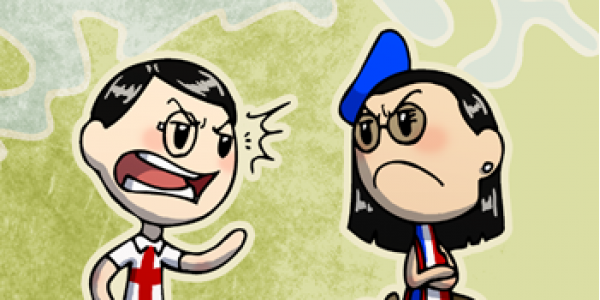 Over 90% of all gunpowder fired by the Americans during the American Revolution was supplied by France.
made by nitrokitty

This was actually one of the contributing factors to the french revolution as well, the french sent over crap tons of powder as well as a lot of financial support, this pretty much emptied the french treasury and then some which made them put taxes up which was one of the major causes of the revolution, fascinating how everything is connected.
EclipseMaster459

And Who got these materials for the Army?
EVERYONE GIVE IT UP FOR AMERICA'S FAVORITE FIGHTING FRENCHMAN!!!
L A F A Y E T T E
lbisno1

May have even been more than that:

But 90% is probably about right:

"Washington appealed for any quantity that could be produced and state governments began encouraging domestic powder manufacturing which was virtually nonexistent at the time. The entire struggle would rest upon the efforts of Attwater, Munson and others like them to supply the army's needs until more plentiful foreign supplies could be obtained. In all, domestic gunpowder manufacturers produced only 100,000 pounds of powder from 1775 through 1777, but it allowed the struggle to continue. Things improved dramatically as France clandestinely supplied the Americans beginning in late 1776, sending over 1,000,000 pounds helping ensure the continuation of the struggle and allowing for the much needed victory at Saratoga in the fall of 1777."

Then a few years later, we refused to pay them back after the French Republic was formed which led to the Quasi-War. Britain kinda supported us. Just a little bit. They REALLY hated France.
PointlessSloth

Yeah France didn't like us that much so it's no surprise they favoured the U.S.
joshupetersen

Thanks, France! We're glad you were able to get democracy too!

Interested in helping get Phase 2, direct democracy going in the world?

@joshupetersen You need to be a Democracy first then ;-)
Mixu

Well... France was one of Britain's rivals at the time, but that is too much.

@Mixu they hated us so much they ruined their economy just to stop us keeping 13 colonies.

@PointlessSloth *Looks what 13 colonies have become.* I think it was worth it. I guess?

@Mixu Your right it probably wasn't such a bad idea after all considering how much money they made us and what they've now become.
nemoleeexe

I already knew that France was our biggest ally.
Epi

They keep doing it.

Does this mean the american revolution was just a war by proxy?

'@Tjalve'
In some ways it was yes, for the French to the British. It was rather similar to how superpowers use conflicts in smaller weaker countries to one up one another these days and in the Cold War.
Add comment: Please Sign in or create an accout to comment.