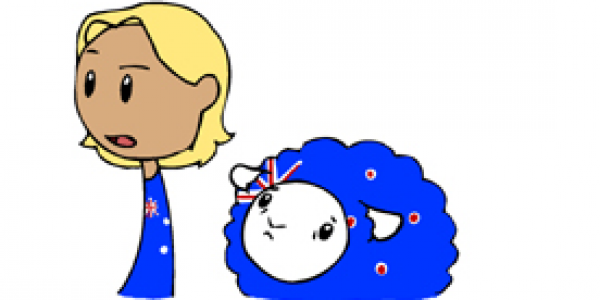 There are three sheep per person in Australia. New Zealand has seven times as many sheep as people. Both pale in comparison to the Falkland Islands' amazing 167 sheep per person!
made by RyanW

A thought just occurred to me: How did they establish those sheep population numbers? You'd think the people studying it would just keep falling asleep.
sshipway

The best part of the New Zealand Citizenship ceremony for new immigrants is at the end when the government presents you with your 7 sheep (or, in more urban centres, just a certificate of ownership). Of course, nowadays (at least in the big cities) people no longer keep their sheep in their own gardens, as it is no longer common to have the 1/4 acre section. Those of us who live in Auckland generally sublet our sheep to the large government collective farms in the South Island, and simply have the certificate of Sheep Ownership on the wall (along with photos of the sheep for those people who are particularly keen).

Many New Zealanders will take short breaks to go and visit their small flock (or, colloquially, 'batch' ) of sheep. Therefore, you may hear a New Zealander saying that they plan to spend a long weekend visting the "family batch" - this is when they are going to visit their sheep. They may come back with bits of wool as mementos.

@sshipway This is the best thing I heard today. Go New Zealand Government! Be Better than the US
Ulliowl

Iceland used to have a large number of sheep per capita, how is it now? I see they are not even mentioned.

Yes, we really do have more sheep than people here in australia.
‘Australia was built off the sheeps back’. In the Case of SATW that sheep was newzealand, and australia was probably on a surfboard.
ThatKawaiiKiwi_

I want a pet sheep for Christmas...and call it "Hipi".
Packless1

Some time ago, I've heard that Australian scientists try to reduce the greenhouse-gas-emition of their sheep by genetic-engeneering of the sheeps microbiome...
Somebody even calculated, that the sheep in 'Down-Under' contribute more to global warming than all cars in Australia...?
(Fact or urban-legend...?)

@Packless1 uh I know of a immunisation we have to give our Cattle for that reason, but as a sheep farmer I am unaware of that (we got out of cattle for that reason) Mean time you should eat Kangaroo, they don't produce methane and we've got them in plague proportions. (they're like Pigeons or Squirrels or something)

@6WhiteBoomers ...some years ago (it was during the BSE- / Mad-Cow-Desease-crisis) i once had Kangaroo in the cantina...
...was quite tasty

Don't know how Squirrels taste...
...but...
...ages ago (mid 1990s) i got some squirres recepies from another forum-discussion
(the original topic was about foxes and rabies...)

@Packless1 Emu's pretty much like a big turkey, give it a go in a 'coat of arms' stew!
s_p_oneil

@Packless1 One point that people seem to forget is that the carbon cycle of all life on Earth is effectively a closed system. There is a fixed budget of carbon in the atmosphere, all the plants, and all the animals in the world. It's constantly moving around in a large complex cycle. No matter how the carbon from plants and animals gets shuffled around, there is no overall net gain or loss of carbon.

On the other hand, digging up carbon that's been trapped underground for millions of years and burning it adds a very significant net gain of carbon in that cycle. Sure the Earth has some VERY long-term cycles that would eventually reintroduce some carbon that had been trapped underground, but not all over the world all at once the way humans seem to be trying to achieve it.

This is my favorite visualization of the impact of human industrialization: https://xkcd.com/1732/. Even if it's not completely accurate, IMO the rate-of-change for the slope of that line at the very bottom gets the point across very clearly. It also points out that domestication of farm animals happened thousands of years before the warming really got started.

of course not as many people live on Falkland than on New Zealand, or Australia, but this is still true :> (＾ω＾)
lambdanis

Wales: 4 sheeps per capita. I guess Wales should be attentive to Falklanders so that any one doesn't break his relationship with New Zealand ;)
NeinNeinNein9

@NeinNeinNein9 No. The name Islas Malvinas is just a Spanish version of the name given to the islands by the FRENCH explorer who discovered them, Iles Malouines. They have belonged to Britain since 1830. They never belonged to Argentina. The country didn't even exist in 1830. The only people from Buenas Aires ever to live there were pirates, and a few soldiers who mutinied and demanded to go back to the mainland.

Why? Because the islands are cold, wet, and lonely. The only people who have ever lived there voluntarily are sheepherders and fishermen from the northern British islands which are also cold, wet, and rainy. If oil had not been discovered near there Argentina would never have invaded the islands.

@Sunwyn In fact, Argentina exists since 1824, year their Independence War started in 1810 ended, under the official name Provincias Unidas del Río de la Plata (but after taking out what would become Bolivia and Uruguay, the name used commonly for the territory was Argentina). It's true, however, that they lacked a national government until 1854.
Río de la Plata took possession of the Malvinas in 1820, in the middle of the war, under the basis of inheriting Spanish sovereignty, and as they weren't invaded by other factions, at the end of the war they belonged to the emancipated territories under the denomination of Argentina.
In 1833, taking advantage of an attack the US had made on the capital in retaliation to actions taken by its government against seal hunters over fishing (hunting) rights, the UK sent a Cruizer-class military ship to "re-establish" British rule over the islands on grounds of "prior discovery" (which have been since then discredited, as by the suppossed date of its discovery the islands had been appearing in maps for decades).
While the Argentinian residents had to leave because the US attack had left them without means to oppose the British, Argentina has been trying to reclaim them from the start, with a couple of minor attempts made prior to the Falkalnds War, but mostly symbolic due to the difference in military power.
As of currently, the islands are in a state of non-autonomy, meaning that they are not formally British territory while still belonging to them (the UK administrates the islands but does not include them inside their national territory). To the point that British consider the Falklands have all of the rights of a nation EXCEPT the right to administer itself, which is a common tactic of theirs to maintain colonies while presenting themselves as a non-colonial nation.

About what you say, the people who have lived there include spanish sailors and fishermen, argentinian sailors and fishermen, (while only short-lived) US seal hunting settlers and british-descending shepherds and fishers. The islands are not as cold as some regions of Argentina (usually 5-25 ºC in the summer, -0.5-10 ºC in the summer, which is not that cold of a region) and British Government mostly never paid it attention until after the Falklands War, so they mostly only rule them due to pride.
Agemegos

@NeinNeinNein9 The people who live there call them "The Falkland Islands". Go with democracy and self-determination, not historical claims.
Isokisu

I was wondering the other day, what they might grow in there, since it is a small island and middle of the nowhere. Now i know. Sheeps.

New Zealand: 6, according to the government: http://www.stats.govt.nz/browse_for_stats/population/mythbusters/3million-people-60million-sheep.aspx But at the peak it was 22! Australia is now under 3 per capita. Falkland sheep estimates seem to vary by quite a bit - if you take some of the higher bounds, it could be over 350 per capita!

Where did we even get this many sheep o.o