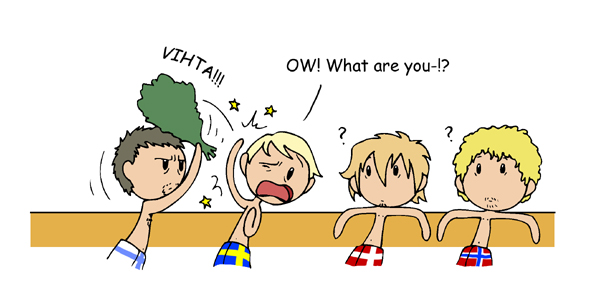 There are around 2.2 million saunas in Finland, 1 for every 2.5 people.
made by HetaFan

What did you expect? Sauna is Finnish Invention. THIRD FINNISH INVENTION!
AncientSaladGod

Considering that from what I hear, for Finns, a Sauna is basically on the same level as a toilet, in terms of essential house rooms, i'm surprised it's not more.

@AncientSaladGod
Oh, toilet is not that important. My family has a summer cabin and there is a sauna but no toilet. And many apartment buildings have one shared sauna in Finland.
Karen

We have three saunas. One at cottage and two at home (one inside and one outside) And also we want a mobile sauna.
Hetafan21

Too bad Saunas are not more common in southern Canada

That few? Actually, the math may be right as you do not need a different one for every member of the family. Most of the time.
EUcomicartist

so... there is people that are only 0,5 of a human body? like, a half?
amypisces

Sounds romantic, except for the problem of the other half person.

Unless you're into that, then by all means, enjoy.

@amypisces Well if she is 20 weeks pregnant, I think the unborn baby counts as the "half" since we don't count the unborn into the population until they are actually born...

I could have sworn there were more...

Well, not that I've even been there, but from what I heard, sauna in Finland is serious bussiness.
Swedishchinese363

There is Even a Burger King Sauna in Finland.
diabolical

Where do you find half of a person

@diabolical From those average families that have 2,4 children.

@diabolical Also, you can find them in Alaska, which has a population density of half a person per square kilometer.

@diabolical It sure is. In popular culture, it's famous for being the place to go for misanthropes and misfits who think Montana is too crowded, at 2.7 people per sq. km. Occasionally there are stories of people who think they're going to Alaska to live off the land, only to find out that it's more likely that the land will live off them!

@uktana Thank you for the heads up about Alaska, I was considering moving there to die and host my own funeral, but after hearing that the state lives off the welfare of its citizens I don't think I could do it. I can barely take care of myself! I couldn't possibly handle paying for Alaska's rent, bills, food, and miscellaneous. In my capitalist opinion, Alaska should get a job and take initiative for them self.

@diabolical Well, what I meant was that some knucklehead back-to-nature types go into the remote areas of Alaska with the idea that Mother Nature is going to provide for all their needs, and end up learning how little she really cares for puny mortals. There are two high-profile cases: in one, the guy ended up starving to death because he didn't actually know how to hunt and gather; and the other ended up getting eaten by a vicious grizzly bear after having spent months among the better-tempered brown bears, because he didn't quite understand the difference. The latter was made into a movie by Werner Herzog:

And here's an article about the other one:

Alaska's really a beautiful place, and puts a great premium on independence and self-reliance. I know people who grew up there and keep saying I should move there, not bloody likely, though!

So long as one stays near civilization and pays attention to the advice of the locals (which those two people I mentioned did not do), one should be fine living there. We in "the lower 48" do think of Alaskans as being a bit, well, eccentric (cough cough Sarah Palin cough), but they're probably no more so than anyone else.

@uktana Just so we're clear, you know that Alaska is one of the 50 United States, right?

@Ytterbius5000 Of course, did I say otherwise? It's not part of the lower 48, though, and neither is Hawaii.
Nisse_Hult

I was reading comment after comment in this thread and waiting for Sarah Palin to show up. No mention of Alaska is complete without her.
All you interesting insight into the state asides - in the rest of the world (and possibly to many Americans too) Alaska is really only known for her.