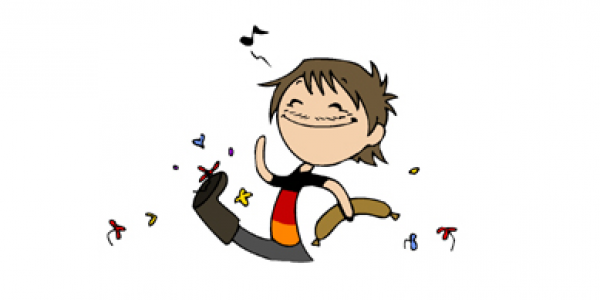 That's a rather embellished translation. A more direct one would be "slap face".
Wolfenbuehl

Backpfeifengesicht is also capitalized, since it's a Noun... Einmal korrigieren bitte.

(Sorry, the teacher within me is coming through again...)

@Iateapenguin It's ok... I Need one every now and then... ;)
NorthIreland

This was actually mentioned by a boy on 'Child Genius' who was learning German. Their favourite word was 'The word for someone who really deserves a punch in the face.' and this might've been what he meant.


Either was i'm gonna learn how to say it properly and never say anything else.
IsaIna

I haven't heard anyone say it in my entire life though...

@IsaIna Dunno about Austria (you are the ones with the strange words, really ;) ) In Germany it's a bit old fashioned, and also sort of a regional thing.

@IsaIna Thinking of Grant, Plutzer, Zumpferl or Powidl. But it's also that to me as a Piefke (another one) it seems like you use the wrong words for certain things like Weste, when you mean a Sweatjacke, and Gilet when you actually mean a Weste.

@IsaIna Is this where I should butt in, and say that while the scandinavian languages are norwegian, swedish and danish are probably almost as similar as german and austrian, there are some words that can cause confusion.
For example, the swedish word "stad" is "by" in norwegian. Both meaning city.
And the swedish word "by" is similar to the norwegian word "stad". Or more accurately "tettstad". Both meaning village.
Also, the swedish word "kuslig" and the norwegian word "koselig" have practically opposite meanings. "Kusligt" meaning creepy, and "koselig" meaning cozy.
And the word "grine" in danish and norwegian also have opposite meanings. In danish it means laugh, while in norwegian it means cry.

@Tjalve In germany, wie have the same in one language: "grinsen" or "grienen" means to grin, and "greinen" means to wail. Wouldn't be surprised if they were related to the danish and norwegian "grine"
Sisu

In Danish: Øretæveindbydende. Litereally Ear-beating-inviting, or inviting himself to be smacked in the face.

I recall reading a cracked article about the best languages to curse in.. or inventive curses or something

There was a danish one... i remember it fully, but i wont list all of it here (i get the feeling this site is supposed to be somewhat family friendly) but it ended with Bøssedværg, which means Gay-Dwarf, though they translated it as faggot-dwarf which i dont agree with. Faggot is a demeaning term for gays, Bøsse is just the literal term.

Its under honorable mentions.