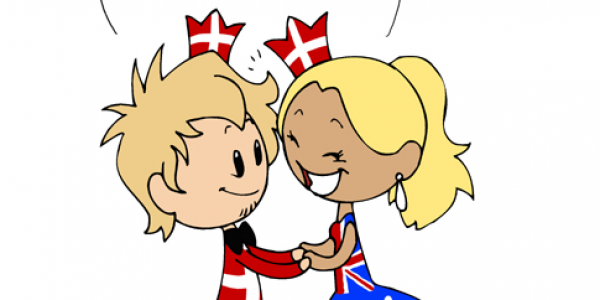 Australia DOES have a Royal Family. Despite being an soverign nation, the Royal family of Australia are the King and Queen of England.
made by palestine_yazan

All correct apart from the fact we don't have a king. Its Queen Elizabeth the second and Prince Phillip, a queens husband is not a king cos a King supersedes a queen, its sexist yes but at this point its more a technicality.

@Motlias Perhaps you can check how this is in the UK. In the Netherlands, the head of state is automatically the king. So Queen Beatrix was King of The Netherlands and queen at the same time. A bit confusing maybe, but still funny in a way.

@ImportViking our queen is just the Queen... well I say "just" XD it's the head of state (but no actual power since the civil war). she is also the head of the church. We don't have a law banning a queen as head of state like some other places so the queen is the queen and her husband is a prince and she and all their children take the royal name, E2 Prince Phillip, Victoria had Prince Albert
Klaus

@ImportViking While I have never seen the queen of Denmark called king, the constitution uses only the word king, not queen. Likewise the law of succession, which uses the word queen only in the combination "queen Alexandrine". So legally, the queen is king.
ImportViking

And there's the Danish princess Mary. Should count a bit as Australian royalty too, shouldn't it?

Well since the aussies do seem to love ABBA, there must be plenty of queens down under!

Oh, and by the way: There has been no king or queen of England since 1707.

HM is queen of the United Kingdom of Great Britain and Northern Ireland (and her other realms). "Queen of England" is not even among her titles.
EUcomicartist

She's Queen of ALL the Commonwealth states not just the UK, Australia and Canada.

@raqs Not quite, actually. Current requirements do not require having the royal family as head of state. India and Pakistan are both prominent examples of Commonwealth countries that do not recognise the Queen as their head of state.
Agemegos

The monarch's only powers in Australia come from an act of Parliament, the Royal Powers Act (1953). And that got passed because she was about to visit, and the government wanted her to preside over a meeting of the Federal Executive Council while she was here, but discovered that that as far as the Constitution went she _couldn't_.

Now, HM's powers under state constitutions are not necessarily so limited. The queen of an Australian state can exercise some of her powers herself, rather than compulsorily delegating them to a state governor, but only if she is present in person.
rlb

Why monaco just have prince and princess but never king and queen?

@Zuperkrunch Because its a Princedom. From the name of that, do I have to explain why its rules by Prince?

@Zuperkrunch I take that as Sarcasm, so nah.

@Mixu I thought it was a Principality

@spoekelse Yes, I meant that. I just didn't get it on lips.
hackerjack

@Mixu To be fair I think the question is why is it a principality more than why a principality has a prince. Principalities tend to be parts of Kingdoms but Monaco isnt.
Klaus

@Zuperkrunch #9763361
"Prince" was originally the title of a ruler. It still is in some countries. It is also a generic term for kings, emperors and suchlike. That is why Machiavelli's famous book is called The Prince. "Prince", in this sense, is "fyrste" in Danish, as in "fyrsten af Monaco".

A king of England got the bright idea to appoint his eldest son prince of Wales. This they have done ever since. The king of France, not to have his son outranked, appointed all his sons princes. From then on, "prince" has taken the secondary meaning of the son of a king. It is also used for consorts of queens regnant. My native Danish has imported this usage as "prins", as in "prins Christian".
leighx

Such a cute idea this is
Dzubur

Sh'es also the queen of canada and many other countries

@Dzubur No-one is quite sure, but there is a strong possibility that HM is not only Queen of Australia but also Queen of New South Wales, Queen of Queensland, Queen of South Australia, Queen of Tasmania, Queen of Victoria, and Queen of Western Australia. But she is definitely not Queen of the Northern Territory.

So when the Statute of Westminster required that acts to change the law of succession (in accordance with the Perth Agreement) be passed in all of HM's realms for the change to have effect, we had acts passed by all the Australian state parliaments as well as federal parliament, just to be on the safe side.

I didn't realize that lots of people doubted this

'@Karen' Yeah most people over look it. Kinda weird seeing as how technically they have some sort of power in the Australian government.

@palestine_yazan
They have no real power, just the governor general.

@Australian-Person
Well, the Governor General's power HAS been used at least once, with the sacking of the Prime Minister Gough Whitlam, so yes, the Queen's representative DID change the government there.

@OnTopOfTheWorld
I am aware of that, I was saying the Queen has no direct power, merely indirect through the GG

@Australian-Person Technically speaking, that's still power. The GG is formally her representative - if, theoretically speaking, she wanted to get involved in Australian politics, she could do so with the powers of the GG.

In practice, though, it's doubtful she ever will unless things got REALLY bad.
Koshee

@OnTopOfTheWorld Ahh, the good ol' days when there was only one form of crisis every few years.
Kemm

@palestine_yazan You'd say her face in their money would be a dead giveaway.
Klaus

@Karen Many Americans believe that Canada is a republic.
SpidersWeb