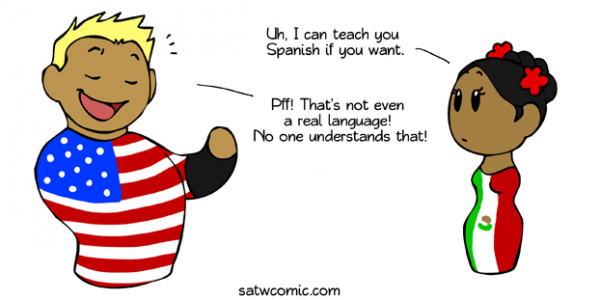 Mexico's full name is "Estados Unidos Mexicanos," which roughly translates to the "United Mexican States." This means "United States" can technically apply to either the USA or its southern neighbor.
made by Hfar

For a similar reason I can't bring myself to call USA 'America', as the continent's northern half alone includes also Canada and Mexico. Technically they're also "Americans".

At best I call USA "'murica" and the people '"muricans", even in front of my 'murican friends.

@Monarth it would depend on who you're talking to. The anglo countries and some countries in Asia recognize North and South America to be separate continents. Canadians dislike being called Americans, but are okay with North Americans (from my experience). Other countries, especially Latin ones, recognize the 'one American continent' plan. US Americans simply call themselves Americans because they're the only country that uses America in its name, but from what I've seen (at least in California), they're careful to call themselves US Americans or US citizens when talking to South Americas.

@MaviMavi I'm quite aware of this. It's just a little nuance of mine, since I can't in my brain single out an America within North America. I prefer to call the country US and its people either 'muricans or US citizens, though the latter is a bit of a mouthful. ;P
sugarbasil

@MaviMavi It's kind of a catch 22 from our angle. We are known as Americans by a lot of the world, so there is not much incentive for us to call ourselves something else. If I say I'm from the United States to someone in England, they just respond, "So you're American." In Japan, the word for the United States is simply 'Amerika.' But yes, it's a huge point of contention with our southern continental brothers and sisters, which can cause serious tension. I lived in Chile for many years and grew accustomed to just saying "I'm from the U.S.," but then tourists would call me American or talk about American movies, which then caused my Chilean friends to go into an uproar.

But saying "I'm from the U.S." is annoying because it's such a mouthful, and it feels kind of crappy not being able to say "I'm Danish/Canadian/Spanish/German/etc." like the rest of the world. It kind of feels like your national identity is stripped away. And we don't really have an alternative option. It's not like we can call ourselves "United Statesians." Plus, as my Mexican peers point out, they call themselves Mexicans because they're from los Estados Unidos Mexicanos. It makes sense for us to call ourselves Americans, being from the United States of America.

If I'm being honest, I'm happy to respect my South American friends' feelings and I do understand the rationale, but I also want to tell them this battle ended a long time ago.

@sugarbasil the problem is that when we want to denominate ourselves continentally, we are Americans after all. It is as if there is a country in Europe called the United States of Europe and these people call themselves "European", that would surely bother other Europeans, regardless of their country.
And yes, in Latin America it is considered that Amercia is only a continent, but it is also considered that way in Spain. Latinos and Spanish speakers (among other countries) we never say "America" to refer to the country but we say "United States". On staff, I like to call Americans "unitedstatesian," which is sometimes taken as an alternative to "American." https://en.wikipedia.org/wiki/Names_for_United_States_citizens https://en.wiktionary.org/wiki/United_Statesian
Landcfan

@MaviMavi Wait, most countries don't consider them separate continents? Do they consider Europe and Asia to be one continent, because that would make more sense.

@Landcfan #9763832
You will be surprised to know that only the Anglo-Saxon countries (Canada, United States, England, and derivations) consider the continent in two. All the rest of the world calls the continent "America" in a globalizing idea of the northern continent and the southern one.
Europe and Asia are just one continent that, for some strange reason, are considered two. America is a continent that seem to be two, but it is one. Without going any further, the rings of the Olympic Games explain it: five rings, five continents. Europe, Asia, Africa, Oceania and ... America. Yes, America. This explains everything, I hope you understood.
Hinoron

@Monarth
Well, you're welcome to your opinion, but don't expect those of us who actually live in those countries to share it. "American" will always be the folks south of our border to me.
VivaWorld546

Also, I have a brazillian coin with the words "Estados Unidos do Brazil" (United States of Brazil) on it.

@Kemm Interesting. I looked this up and apparently this was what Brazil was called before it changed to it's current name of República Federativa do Brasil back in 1964.
Annik

In my country we call Americans what would translate as "united-states-ans" or "united-states-ish" or something like that. That elminates the problem with "Americans".

@Annik Here in Mexico we call the USA Citizens as what would be literally translated as "United Stateser".
TimMogens