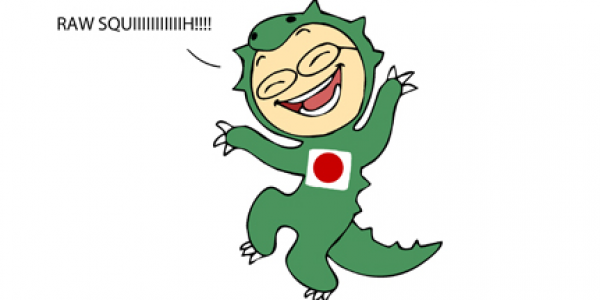 Godzilla has official Japanese citizenship.
made by LouThunders

Godzilla also has his own star on the Hollywood Walk of Fame.

@Xavier You only need a passport to travel. You want to be the one to deny Godzilla travel?
Drivers license is needed if you have a car or need to drive. I would actually love to see that car. I bet it's a Toyota.
DMV is Department/Division of Motor Vehicles only in the US. For example in UK DMV is Deserted medieval villages.But I bet if Godzilla has a DL the photo will be as fucked as ours

Well everyone would have give him a citizenship if that is all what he wants,

The Japanese are so nice
SpikeTheNerd

What can I say? Godzilla/Gojira/Whatever is going up in the world!
ArgaAnders

Hurrah for Japan! That´s one up on Sweden since the swedish monster Storsjöodjuret (The monster of Storsjön lake) is only listed as an endangered animal and not as a citizen.

@ArgaAnders There is something called thatb in Sweden? I've never Heard of that.

If he doesn't pay his income taxes, I'll wager the Japanese Dept. of Inland Revenue doesn't audit him.

@Danelaw Doesn't that require a income? But imagine the person who gets THAT file

"Here you go Sato. This is your first assignment."
I would just quit right there

Except his name is Gojira.

@Dan actually difference between these is closer to a dialect difference.
Because of funny English style romanization 'j' is a 's' sound and "ji" is either じ or ぢ with the later being from soft t-series, so d might sometimes get there as a reminder of old times or base words that have been shortened in use. Original writing uses じ, but as these are different symbols for same sound, it doesn't really matter.
R and L are mostly matter of if you are in Tokyo area or outside of it. Is same letter but some spell it as soft R and others with harsh L. Only real error is in translation being the extra L, which is utterly unacceptable.

So,If the Koreans (Both South Korea and North Korea) decides that Godzilla is a threat to the Korean Peninsula and fires their ballistic missiles to kill it.(Yup,South Korea also has ballistic missiles too.Check the Korean Peninsula's Ballistic Arsenal at https://missilethreat.csis.org/country/dprk/ & https://missilethreat.csis.org/country/south-korea/)And the missiles killed Godzilla. That means the Koreans has killed Japan's biggest citizen?!

@PittinanChansri are you critizising the presence of missiles in South Korea or are you bragging about it?

He lived in shinjuku? my hotel was in shinjuku area but i didn't meet him.. He looks so happy.. Wanna visit his apartment/house,he is not that tall as seen in the movie..

@DarkShadow988 hahaha.. I never realized that date sept 11, until i read this comment.. Don't worry i'm not related to al-qaeda or osama bin laden(but bali bombing...hmmm.. Still no.no.. The master mind was malaysian's citizen) I think i made this account last year after read all comics here.. Do you mean add humon comics? I think we can't add humon's comic here... only the link address...https://satwcomic.com/lost-the-may-game
EUcomicartist

Heh... I would like to see he's passport.
nemoleeexe