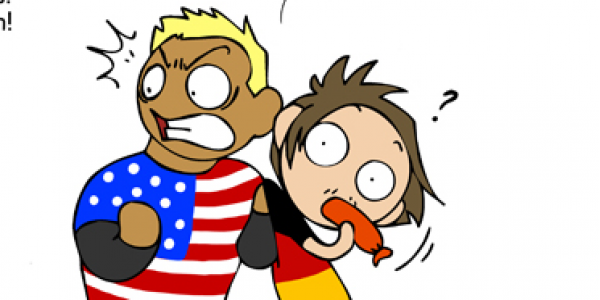 A myth in Germany states that "German almost became official language of the USA". Actually there was a petition on having the laws written in German beside English, which was rejected by 1 vote.
made by schuetzer

One day we will rise again (*imagin evil laugh*)

And befor someone is asking me, no i´m not a nazi. I actually like english more then germa,n what is kinda funny, because i´m bad in english.

'@Tesla'
English is the sexy member of the Germanic family, because it was heavily influenced by French and Latin.

@sagas I tend to call English a bastard for the same reasons. I guess it depends on how you look at it.

@sagas xD I know that German sounds verry agressiv for some other people, but a srangled walrus xD
Klaus

@Klaus Hey it's mean ! It's not goofy, it's just being precise actually much more than english. =)
But it's true we don't chew chewing-gum when we speak.
Rayati

@Tjalve I have a tendency to view English as the most obnoxious language (it's the only word I could find) although I have nothing against it.
lbisno1

@Tesla Please do. Our government has no idea what its doing.
Branovices

We have this myth in America, too. They always use it to illustrate the importance of voting... which I think is weird. If this actually existed as stated then we'd all speak German today and it's not as though we'd pine for English. We'd speak what we learned. LIke we're supposed to be so grateful to that one vote for not having to learn the accursed German tongue?

In bizarro America, where everyone speaks German, would we have a cautionary tale where only one vote saved us from learning English?

'@Branovices'
I don't think the myth states that German would have been the language, but that German would have been A official language alongside English.
Like...well near literally the same situation we have now with dominant English but notable and constant Spanish presence.
There were lots of Germans (in the Mid-Atlantic) but not in power, the British Isles folks dominated every single colony with semi-exception to New York. Germans mostly were just farmers.

@Branovices Just thinking about having to speak the black tongue of Germany makes me shudder! brrr!

@Neuntausend I'm pretty sure "accursed" was meant sarcastically. Around WWII, there was a lot of hostility in the U.S. towards everything remotely German, including frankfurters and saurkraut (temporarily renamed Liberty Dogs and Liberty Cabbage, respectively). Part of that was a hysteria about language, specifically, "If we lose the war, the Nazis will take us over and force us to speak German! Our language and customs will be erased!" But it's been a long time since WWII, and most Americans look at things like the 'cautionary tale of why voting is important' and just roll their eyes.

Until you bring up Mexico and the increasing prevalence of Spanish, and then it's anti-lingual hysteria all over again. =P

@ArynChris Thanks for clearing that up. I already thought it might have something to do with the war, but I didn't know about the Liberty Cabbage.
Tjalve

'@Tjalve'
In what way are Germans forced to speak English.

@sagas In the same way that everyone else is forced to speak english.
English has become the de facto international language. And so most countries teach english as the second language. Or rather as the first foreign language.

Do you think that was the case before WWII?

'@Tjalve'
Right, so no is forced to learn to speak English. And comparing this to Nazi conquest is stupid.

Also lol at "most countries", outside of Western Europe and the British Commonwealth (and the latter ain't the US's fault) this is not the case. Not to the extent in northern Europe especially. There's a lot less english proficiency even in other parts of Europe near you then you seem to realize.
https://upload.wikimedia.org/wikipedia/commons/thumb/6/6c/EF_English_Proficiency_Index.svg/2000px-EF_English_Proficiency_Index.svg.png
Mostly that codes down to "Other Germanic language countries easily picking up other Germanic language that is useful", oh the tyranny!

"Do you think that was the case before WWII?"

Actually kind of yeah. English being lingua franca has a shitload to do with a certain thing called the British Empire spreading it over loads of Africa, parts of the Middle East, parts of Southeast Asia, and nearly the entire Indian Subcontinent in some second language form or another.
Then the US rises to prominence with the British decline after WW2 and keeps the importance and usefulness of the language going.
And then in the 21st century German kids slave away in the English mines as their American masters laugh and crack the whip.

@sagas Let's not make this a fight. I'll try to explain the whole thing. "Forcing" is not a good word, because it means some other country makes you learn it, but if you are going to do anything international you have to know English or hope that your translator knows what they are doing.

So in short: Not forced, but pretty much mandatory.

I kinda like that everyone in US is baffled that I'm trilingual and didn't actually take any extra classes for those languages. I speak Finnish, Swedish and English. My Swedish is crappy, but I think I would survive day to day life in Sweden. I also speak some German, French and Japanese, but not in the same extent.

'@Barracuda'
"I'll try to explain the whole thing. "Forcing" is not a good word, because it means some other country makes you learn it, but if you are going to do anything international you have to know English or hope that your translator knows what they are doing."

Doing anything international would in the vast majority of cases ensure you would be having to learn another language. It just so happens to be English. And yes, what you're saying is true. What he was saying was much more than just an explanation.
Kemm

@sagas That map only shows the proficiency. I can tell you by own experience that "proficiency" has nothing to do with @Tjalve's accusations of it being a mandatory "first foreign language". It only shows how much do the students care or how easy is it to learn it with the differences in grammar (I've been told, for example, that bahasa speakers have no idea of what a verb is and it takes a lot of time to learn the concept, if ever; told by a bahasa speaker).
Klaus

@sagas #9516331
Until WWII, German was the international language of physics.
nemoleeexe

Well that's the thing most of the Midwest before world war one spoke fluent American German, but it was suppressed after and during ww1 do to anti German sentiment.

'@Ohio'_Man
Uh, you're heavily overstating how much of the Midwest would have been German speaking. Yes there was more of it before the wars, not on that level.
Dan

Germans will certainly find a warm welcome in Wisconsin and maybe Michigan.

Speaking as a Minnesotan, Wisconsin beer is highly overrated, but their cheeses and sausages are awesome.

@Dan
Speaking as a Minnesota born Wisconsinite, Whiskey, and malt liquor (ever drink mickeys? Nuff said)
Wisconsins official language for governence was once german. too tedious translating all documents into german then back into english, was short lived (one year)
NapalmRocks666

I lived in Germany for a year and a half, and I was continuously struck by how the cadence, the general sound, of German was closer to American English than British English.

@Bamawing Something like half the immigrants were German in the 1800s so it's no wonder. Being a melting pot has it's benefits. ^_^
Tear

This actually happened. The big documents were almost written in German.
Betelgeuse9

Well, now in the United States the second most spoken language is Spanish.
https://en.wikipedia.org/wiki/Spanish_language_in_the_United_States.

@Betelgeuse9 And official documents ARE written in Spanish, or at least can be provided in Spanish. The US has no official language, so documents are provided based on what's in demand (mostly English and Spanish).
PileofShadows

@Betelgeuse9 in australia, the “secondary” or second most spoken language, is Mandarin Chinese. Probably because of the chinese immigration.
PileofShadows

@Betelgeuse9 in australia, the “secondary” or second most spoken language, is Mandarin Chinese. Probably because of the chinese immigration.
Steeeve

@Betelgeuse9 Not just second language, some Spanish words are part of the local American English dialect in areas with higher populations of Hispanics so you'll hear people speak it who don't actually know Spanish. :-)
Balama

The proposal was to have "some laws" translated into German for the benefit of German-speaking residents.
Add comment: Please Sign in or create an accout to comment.