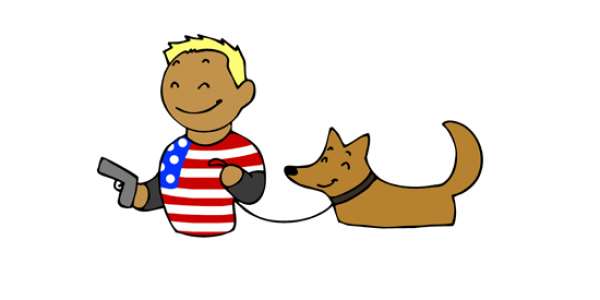 George Washington called a ceasefire during the Revolutionary War to return a lost dog that belonged to a British General.
made by LtD

That is freaking cute!
PointlessSloth

Yeah George Washington was the man! 'Murica is still holding and pointing that gun forward though, unless it's pointed to the ground/his own feet?
ScandinavianRyanRoss

that's only fair. so cute and adorable move from the U.S!
Finn123

@Mixu Probably meant that there are books about the Revolutionary War, and the incident is mentioned too...
Tear

That's true. There are books about it that they make us read in Elementary School.

@Tear wait a second.... Books? Books about great man calling ceasefire for dog? Im not blaming the dog or Washington, but seriously? How many books? Am I overreacting to this? Maybe.

@Mixu I'm not kidding, there is a small book for Elementary Schoolers called something along the lines of 'Returning the Enemy's Dog'.

@Tear Ok. Now there is nothing for me to say. Only just why?

@Mixu
I have no clue. It was cute though.

@Tear @mixu
I believe this is the book you are talking about:
https://www.amazon.com/General-Howes-Dog-Washington-Germantown/dp/1596090324

@Mixu I never heard of that, and I'm from the same state as George Washington, so it's probably only in some schools. But George Washington is basically worshiped, so the book was probably meant as a story to show kids how great he was. At least it wasn't that cherry tree story or the wooden teeth bull shit.

@Mixu
Because it's polite?
Just because we're shooting at each other, that doesn't mean we can't be civil about it. ^_^

There are war stories about both sides taking Christmas day off, and sending each other booze. Even rarer ones about them all getting together to celebrate in one group.

Also consider; you have the enemy general's dog that wandered over to your side. You didn't try and capture it, but you have it now, and so you must deal with it. What ELSE are you going to do with it? Hold the dog for ransom? It's not really valuable enough to gain anything useful (unless the enemy general is insane). Shoot it? Why? What did that poor dog ever do to you? It's clearly no threat, nor is it responsible for the war in any way; it's an innocent party.
Giving the dog back is one of the least complicated ways to get rid of it... and might even buy you some good will and civility treatment later if things go poorly and that general has to decide how well to treat his prisoners.
Mixu

Thats a Great think to do.
Ytterbius5000

Wow. How nice of him.
Rosin