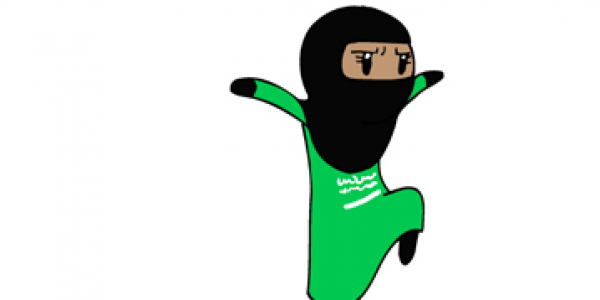 There actually is a Pakistani TV show called "Burqa Avenger", featuring a burqa-clad ninja who fights evil people that try to prevent girls from going to school.
made by Karen

when they read each other's minds 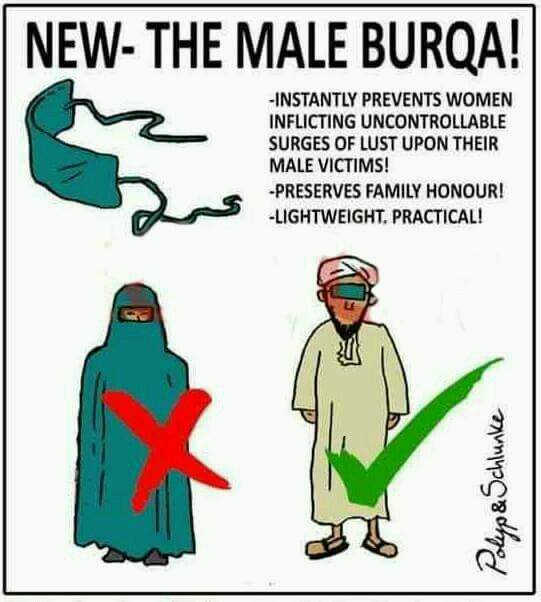 Being a sort of superhero fighting for female rights in Pakistan... while wearing a burqa? Ironic.

@Finn123
Not really. While burqas have been made as woman-oppressing chains in the West to raise a banner against Islam fundamentalists (almost no one cared about them before 9/11), when seen in context and taking into account that many women who wear it do so willingly (including women very vocal in favor of women rights) in areas not ruled by fundamentalists, you would find that it has a more proper reason behind.

The same way men traditional clothing and women traditional clothing in many countries are different and no one bats an eye ranting about discrimination, traditional clothing in the Middle East also has a distinction between male and female, and the basis for its modelling are functionality, disponibility and fashion. Climate in most of the Middle East is hot and dry, therefore traditional clothing, both male and female, has as the bare minimum a piece that covers the head, in most cases the whole scalp as it's the part more prone to sweat (=losing body water); they also tend to have some kind of veil to cover the mouth, as it's another major source of loss of water, but since many men traditionally sport beards, they become optional for them; finally, loose clothing that covers the body without sticking to it is a must to endure the sun and the heat. A burqa is a simplification of the former functional aspects joined together in a piece of street wear: they don't wear it inside the house mostly because it's not needed. It just so happens that, from time inmemorial, it has been the case that healthy practices have been traditionally appropiated by religions as precepts (e.g. Middle East religions ban pork because badly cooked pork is a source of diseases), so what was originally a cultural quirk with nothing but functinality and comfortability in mind has been integrated in some regional branches of religion.

'@Kemm'
I'm not sure you know the difference between a Burqa and other types of religious dress... of course I'm not sure the cartoon does either since the thing the superhero is wearing looks more like a Niqab.
Anyway point is, I agree for the most part....but actual factual Burqas? They're.....VERY extreme. Google image search em' and you'll see what I mean.
Also very rare and virtually unheard of outside Afghanistan and pockets of South Asia. They're basically nonexistent in the Middle East proper.

@sagas If Im' not wrong, a burqa would be something in overall description like a cheap ghost costume (that is, mostly a single piece of fabric worn over the head that covers the wearer from top to bottom) with some contraption to allow vision (usually a slit or a mesh, but in places with a lot of sunlight, that's more than enough). There should be, of course, more restrictive variants, but those are after-the-fact modifications (that is, after a proper piece of traditional clothing got tainted with religious prejudices, probably some centuries ago).
Skruzz

@Finn123 the burqa is not a symbol of male oppression despite what a lot of Westerners think. It's a dress of functionality given the extreme climate of those regions.
Also, I personally find a lot of traditional Islamic wear to be very stylish.
SpikeTheNerd

@Tear @Ouran-After-High @amypisces whether you wanted to watch it or not, here's the first episode for you to watch

Please. Show this to Malala. She'll be proud of this somehow.

I love that this exists!
EricTheRedAndWhite

@Caedis
#9599151
What you see in the picture is not the Burqa Avenger. It's the SATW-personification of Saudi Arabia, used here to illustrate a burqa-clad ninja.
Caedis

But why is there a Saudi Arabian flag on the Burka Avenger?
Karen

Haha, just caught a bit of a joke from the show's creators:

"Together with children 'Ashu', 'Immu' and 'Mooli', the Burka Avenger fights the evil magician 'Baba Bandook', his henchmen and corrupt politician 'Vadero Pajero'"

Pajero is Spanish for "wanker". ;)

@Karen No surprise that Mitsubishi Pajero seems to have another name in Spain :P
Honda was going to name a car Honda Fitta in Europe, but after the swedish office told them what "fitta" means in Swedish it became Jazz instead. Hint: vulgar name for vagina

@Garchomp Haha, that's great. I just wish the Faroese made cars and tried to sell them here, they'd surely be a riot. Faroese is the sort of language that when read in Icelandic comes across incredibly dirty.

Seriously, faroese signs are a laugh riot here - whenever people go to the faroes, they always come back with tons of pictures of hilarious signs. ;)

@Karen
Still, nobody seemed to make fun of Volkswagen Bora...

It's just too perfect. ^^
Kemm

@Karen And Vadero may be spanglish for "Darth Vader". Still, for it to be spanish, that j has to be read close to an h (more like jewish ch or greek χ).

@Kemm I can only speak for myself, but I always read Spanish words that contain a "j" with an "h" sound as you describe, and I just assumed that everyone does. Likewise I read "ll" in Spanish words as the English "y" sound (although I know that in Argentina it's more like a "sh" sound - but in most Spanish speaking countries it's like an English "y"). I certainly don't read Spanish "ll" with an Icelandic "tl"-like lateral plosive or read j as an English "y", as one would read them if they were Icelandic ;)

@Karen Just giving the neccessary info for those who didn't now, which due to the two main pronunciations of the j being not the spanish one, should be majority. The fact that you knew about slang terms points to you most likely being aware of the spanish readings.
Isdaril

Ahhh but it's an animated serie... It would have been so epic with real actors ^^
fdj

Kinda sad that that has to be a thing.

Apparently you didn't grow up in the 80s, when it was a thing for virtually every US-made cartoon show.
Ouran-After-High

heck yeah this is awesome!
Tear

Link to the episodes! Please!
AussiePengwin

That sounds awesome! Totally watch it!

Awesome!! I'd watch this show