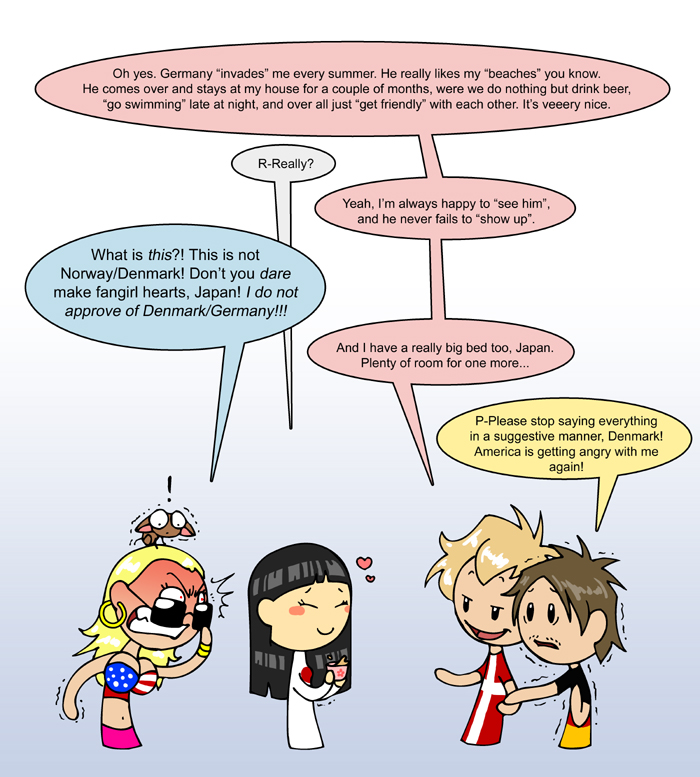 All that just to try and pick up Sister Japan.

A silly idea that didn’t deserve an entire comic.

I was talking with a German girl about how more than half of Denmark’s tourists are from Germany, and that something like 70% of the people who rent summer houses here are Germans. And if we don’t get as many Germans as usual, we start to worry we did something wrong and that the Germans no longer like us.

She said, “Aw, don’t worry. We just need to see other countries every now and then, but Germany will always love Denmark.”

And the most natural response was of course, “Don’t tell Sister America that. It does not work with her Norway/Denmark ship” 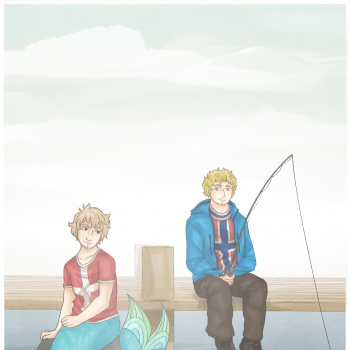 A Tale in the North 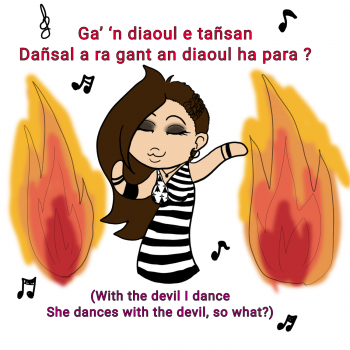 I totally ship Germany/Sister Japan!
Anyone else?

@SpikeylovesSatW Me, yeah. And tehy live in a robotised flat as far away from America as possible.

@Irlanda oh yeah me too
ImTheDevilDog

Southern Germany (Where I live): Travels to Italy

@RandomFella so Den gets succ while italy gets the "southern regions" *wink wink*. Now I can imagine them having an eiffel tower

I have a solution! Norway/Denmark/Germany! The three of them all together.
AmericanButterfly

Brother America: uses force and gun and big size to get his way
Sister America: doesn't need to use force or a gun just stares straight into your soul angrily

s. America, please. Denmark is the second biggest whore in the SATW cast after S.Sweden. You can't stop multiple ships being canon at the same time

@SchrodySweden Oh, at the time I'm pretty sure that part wasn't there

@SchrodySweden Huh. I might not have been attentive enough to notice that at the time.
Nymphadora

"America is getting mad at me again!"

Sister Japan is flooding in the south!
potatoe4life

AMERICA, DOES NOT APPROVE