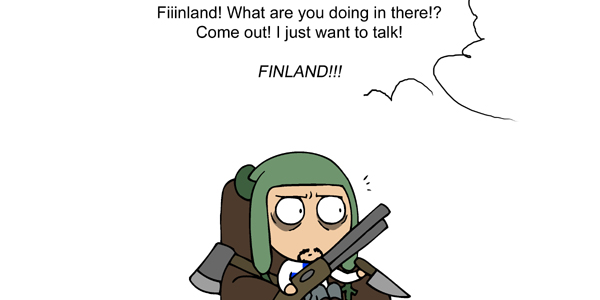 During the infamous Winter War (where Finland received no aid from allies) Finns invented the Moltov cocktail out of spare parts, to bomb Russian tanks, as the Finns only had one working tank in army.
made by ameriFinn

Western Countries: "USSR, why are you bombing Helsinki?" USSR: "We are not bombing them. We are dropping bread baskets to hungry Finns"

Meanwhile at front lines: a BT tank wanders too far away from infantry. Finnish soldier gets on top of the tank: "Hei ryssät! Täältä tullee hieman juomaa, kiitos leivästä!" a molotov cocktail got inside of the tank and crew starts evacuating. (To translate for you what the soldier said: Hei Ruskies, Here comes some drinks, as a thank you for the bread!" obviously said in very sarcastic and insulting manner)
NomadSpork

Finland received volunteer soldiers from Sweden and Norway, along with aid from multiple other countries: https://en.wikipedia.org/wiki/Foreign_support_of_Finland_in_the_Winter_War

Finland had 10 working tanks, according to this:

Of course, they were operationally basically nonexistent; Russian tank forces were a hundred times larger.

So, while this doesn't appear to be completely accurate.... close enough

@Karen Actually we had 32 operational tanks during Winter War if you count the captured ones that we got in working order. There were more captured Russian tanks on Finnish side, but most of them were not fully operational. Still 32 against 2500-6500 (there's no exact numbers on how many Russian tanks were actually on the Finnish front) it's pretty much ok to say we had almost none

Still saying just one is wrong. Oh and the not fully operational ones were in full order during Continuation War. I can't remember the exact number, but it's still very much under 100.

If we are talking about the name and using alcohol, tar and gasoline, then we can say it's Finnish invention. Petrol bombs were used earlier (I want to say in Spain, but I might remember that wrong), but Finland made it more reliable and named it after Russian minister Vyacheslav Molotov, who had told the rest of the world that the russian bombers were actually dropping aid packages. So a bottle of pure hate and fire got the name after a guy who said bombs were care packages. We just wanted to pay back the help and offered Russians some cocktails.

Oh and the no help thing is a bit of an overreaction. UK wanted to help with some troops, tanks, weapons and other supplies. They actually had the first set of supplies ready to go, but sea routes to Finland were cut and Sweden and Norway didn't want armed troops passing through, so that plan went fübar. Sweden took a lot of our children as refugees and allowed volunteers to join Finnish defence force if they wanted. Norway helped too, but I can't remember if it was just food supplies or was there volunteers from them too.

All in all the whole UK help might have meant something very different in the Finnish front as we wouldn't have needed the German help as much as we did. At Continuation War we took German side because we really needed the equipment. We had no chance if we had to fight Russia again with next to no military hardware.

And before anyone calls Finns Nazis: No one really knew what atrocities Nazis were up to untill late in the war. I can imagine the Finnish command center getting the news about death camps and muttering a unified "Voi vittu..." ("Oh fuck" or if you want to be literal "oh cunt") when they realized who they cooperated with.

While I don't want to fault the Finns too much for siding with Germany, it's not like nobody knew the Nazi's hated the Jews and made life hell for them. That was know since well before the war.
Now the industrial killing of Jews by the millions wasn't discover until later, but that Finland was getting into bed with a very nasty ally they knew when they did it.
On the other hand they didn't really have that much of a choice, stuck as they where between two massmurdering dictatorships.
So I'm not by any means calling Finns Nazis - you just didn't have much other choice then to make a pact with the devil, unfortunately.

@Nisse_Hult Can't the same thing be said with the western countries that sided with USSR?
There is a saying that beggars can't be choosers, and that the enemy of your enemy is your friend.

Basically yes, and that's why I don't fault Finland for acting as it did.
I just pointed out that it wasn't a complete surprise that Nazi Germany was virulently anti-Semitic and mistreated the Jews and other groups in their own and countries they occupied. That was already known in the world and Finland before they decided to ally with Nazi-Germany.
But I still defend that Finnish choice that time if people attack them for it.

History isn't black and white but often has a lot of shades of grey as well.
Especially in times of war countries can't always afford to do what they would have done in peacetime, but must look to the security of the nation. And sometimes that means choosing between only bad options, trying to pick the least bad one for the nation.

It's very easy for us to sit in safety decades later and accuse them of doing the wrong things then, but had we been in a position to decide, in most cases, most of us would have ended up doing the exact same thing ourselves.
Because most of the time these questionable historical choices where still the least bad option available to the governments at the time.
Barracuda

@Nisse_Hult Very true. We did know that jews and pretty much everyone who was even a little "different" were treated badly in Germany prior the war. That's why I chose the word atrocities. It's not like we treated everyone equal, or even decent back in the 40's either.

Not to say fucking up peoples lives because they were poor, gay, different religion, race and so on was a good thing. It was horrible, but common in western countries too. The killings, and especially the scale of them was a surprise.
IHadToRegisterForThi

@Karen Did you read the article you linked? I wouldn't say they invented it, not when both Spain and Japan used them first.
It's true that they named it, and perfected it for war, but going by the perfected form's description It's not exactly the cocktail we see today:
"...Further refinements included the attachment of wind-proof matches or a phial of chemicals that would ignite on breakage, thereby removing the need to pre-ignite the bottle..."
The burning rag on a bottle is quite iconic, after all.

Funnily enough, in all three wars there were soviet tanks on the receiving end; you'd think Russia would have learnt by then.
Add comment: Please Sign in or create an accout to comment.