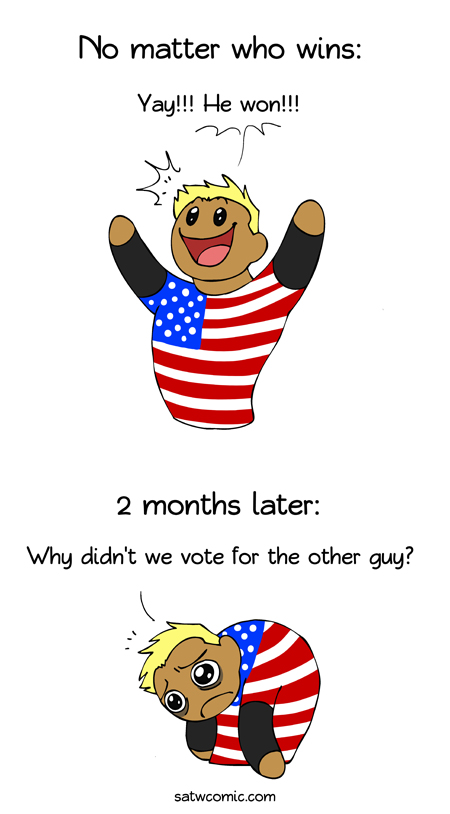 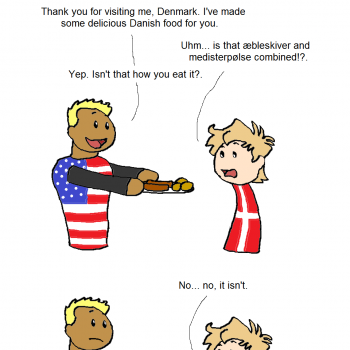 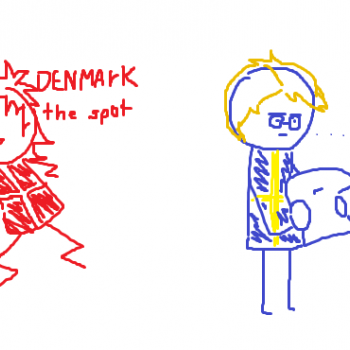 HE won. the other GUY. Because the president will always be male. We could have changed that in 2016, but no, we'd rather elect a human cheeto with possible incestuous feelings for his daughter, a strong belief that our last president was actually born in Nigeria based solely (I think, but I don't know where Obama's family came from before moving to the US) on his skin tone, a complete disregard for science, and a horrible Twitter habit involving a lot of hypocrisy (especially with going against his own past tweets), and who didn't even know how to govern when he ran for president, and only ran to increase his business' popularity. I mean, even HE didn't think he'd win. Come ON, America, get your shit together.

@SchrodySweden And who does the Democratic party want to nominate to correct this? OPRAH, who is NOT a politician. That's EXACTLY why many people don't like Trump.

@MormonD ok I haven't seen this one. Are you sure it's not a satirical piece. I feel sure I would have heard
Hinoron

@MormonD
...Actually I think the reason most people don't like Trump is because he's a sociopath working to undermine America's already shaky human rights issues.

There's hardly a need to point blame at his LAST job when he's fucking up the current one this badly.
Zuperkrunch

@SchrodySweden obama ever spent his childhood in jakarta, his step father was indonesian and his half sister still lived in indonesia ... I think he was born in hawaii.. @Zuperkrunch thanks, and yeah he was born in hawaii
Sionyx

@SchrodySweden Well, SHE did win the popular vote in 2016. The way our elections are set up meant that orange boy still got the presidency. There are all sorts of articles and studies about just what happened, so I am SO not getting into the details here...

@Sionyx I know, I'm just still salty about how that happened
MarianneDos

@SchrodySweden You wanted people to give a vote for a woman just because she is female? Geez.

Obama's father was a married Nigerian who came to Hawaii and had a bastard child with a teenager who hung around radical political activists. Because his mother was so young, if you interpret one law in the way that literally no one ever has (since the law wasn't written with teen pregnancies in mind), you could claim that he might not be a citizen if he was born outside the country. Which he wasn't.

No naturalized citizen can ever be president in the US. You must be native-born. This means you either must be born in the country or have at least one parent who is a citizen of the US. One law defining the parents says that the parent is a legal adult, which his mother was not. Again, this is an interpretation that has never been accepted--that the child of an American teenager isn't a citizen if the child was born outside of the country--but it is the absolute letter of one law. And Obama was born in Hawaii, anyway.

No one--even the crazy conspiracy theorists--thought Obama wasn't native-born "based solely...on the color of his skin." And Trump was most likely tweeting crap to get a reaction. It's really impossible to know what he really thinks about much of anything because he says so much just to get a reaction.

@MarianneDos No, I was just unimpressed that people would rather pick an unqualified president than vote in a woman
Zenon

@SchrodySweden
Hillary wanted to make Syria a no-fly zone.
That would've started a war with Russia.
Russia has Nukes.
War with Russia = Everybody dead.

Same reason that its good that Putin was re-elected.
Putin was running for his second term against a guy that wanted to start a war, for no good reason, with America.

I wanna live just a bit longer, don't you?

@Zenon you know what, you make a good argument. Thank you

As long as it ain't Trump. MURICA IS ALREADY GREAT!!!!

@TheGecko Well, I wouldn't call it great but certainly Trump will only make it worse.
InDeathWeReturn

@TheGecko soooooo.... how did that go for you?

@Lord_Skata TBF most people know that right NOW and thats why hes so popular. Without him this woulda just been another election cycle of everyone trying to get support while saying nothing so they couldn't get pinned down.

Although I kinda wish he hadn't, then I wouldn't have to hear about the elections 24/7 for the past ALMOST YEAR!!!
InDeathWeReturn

@Lord_Skata You called it. Congratulations. How does it feel to be right?

I heard the Uppsala screams were especially bad the day Trump won the election.

Context https://www.youtube.com/watch?v=ggPcmKV5a68 (watch the whole thing)
In Uppsala, Sweden, there is a tradition called the "Uppsala Scream" or "Student Howl". Every night at 10pm you are allowed to scream out of your window to let go of frustration etc, and others will scream back at you.
More detail in the description of the video.

@Kyasarin How have I never heard about this?! This is amazing!
Hinoron

No matter who wins, America loses.
everyone

What do you mean it is an American thing? Isn't it the same everywhere?

@everyone Yeah but American elections are the most influental ones since he's a superpower.
MArtist

that's what you get if you don't have a functional democracy.
.
MikoMae

i guess that's what happens when you vote

If this situation plays out again, and Biden is worse than Trump... we're in trouble, haha. Though personally, I doubt it.
ApplesRock

At least the 2016 election will be better

@ApplesRock Did you make a typo? The time stamp on your comment says Its from two months ago, but 2016 is about two YEARS ago. Or was it meant to be sarcastic and i'm just reading too far into this?

@MrEMLocke Donald Trump vs Hillary Clinton was a terrible election and it was 2016.