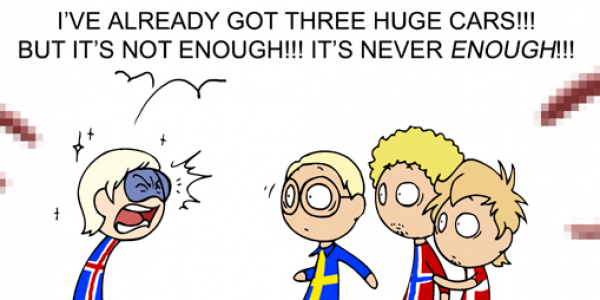 Icelanders suffer from Small Nation Complex. Meaning they know they are the best Nation in the world.... Per capita of course!
made by pabbadottir

I didn't see this one when I went through all of the cards on the "all time" list because it doesn't show up there.

Actually, as someone who lives here, I can assure you that while it's a bit of a stereotype, it is in general true. The phrase "Best í heimi"/"Bezt í heimi" is really common, often sarcastically followed by a "miðað við höfðatölu..." ;) Iceland has a surprisingly high number of per-capita records in a wide range of fields, but almost none in absolute terms. So we make a really big deal of our per-capita records to make up for it. ;)

The Small Nation Complex extends much further than this, too. If any celebrity ever says anything nice about Iceland, for example, it makes big news here. They end up getting put in the "Friends of Iceland" ("Íslandsvinir") category. "Look! Look! He mentioned us! You see that, everyone? He said our landscape was pretty, isn't that great?" As evidence to prove that we really are "bezt í heimi" ;) It's a serious "Small Nation Complex" indeed.

One of the recent running jokes is that, after the Panama papers came it, it was discovered that Iceland had *by far* the highest number of offshore tax shelters per capita. "See? 'Bezt í heimi' yet again!" ;)

@Karen Huh. I see. Thanks!
Tjalve

@Karen I could mention that Norway has the same Small Nation Complex. Maybe not quite as severe as Iceland does.
But it's somehow very important to mention when various "famous" american people are "half-norwegian", for example.

@Tjalve Hehe, but at least America even knows that you exist ;) Sort of frustrating whenever America celebrates "Leif Erikson Day", how they use it as an excuse to issue a proclamation celebrating US-Norwegian relations... even though Leifr Eiriksson was an Icelander ;) Sure, he spent a few years in King Olaf's court, but that doesn't somehow make him a Norwegian! It's as if they celebrated a "Roald Amundsen Day" to celebrate Belgium because the first mission he set out with was Belgian ;)

People only remember that we exist when we take out air travel to the North Atlantic ;)

@Karen Yes, America know that we exist. Usually they think we're the capital of Sweden.
I think I'd prefer them not to know we exist :-)

As for Leif Eriksson, I don't think he was an icelander. It would be more correct to call him a greenlander, I think.

Leifr is believed to have been born in Breiðarfjörður, Iceland, probably at the farm Haukadalur. And Greenland was an Icelandic colony then anyway (but Iceland was independent from Norway)

Yeah, his father sure had a knack for getting in trouble. Still, it's not completely clear that it was his fault in Iceland, it appears to have been one of those tit-for-tat things that we had here at the time that tended to get out of hand. So out of hand in fact that in the end most people eventually welcomed Norway to rule the country, so long as they could stop all the violence ;) BTW, you'd probably be surprised at the percentage who would welcome reunification with Norway today - there's even a political movement advocating for it. Most people sort of look at Norway as our "big brother" and most everyone it seems has their own stories of times Norway or individual Norwegians were nice to us. You randomly find Icelanders who don't like Danes for one reason or another, but almost nobody here dislikes Norwegians.

@Karen With regards to reunification, I for one would welcome Iceland back.
I do however feel there is a problem, because I think icelanders feel too independent and strong.
I don't think you'd want to join us when there is a crisis, such as during the icelandic bank crisis. Because joining us then would be like admitting defeat. Something I don't think you'd want to do.
I could mention that during the icelandic bank crisis, there was a movement here in Norway that we should just buy out Iceland. Pay your bank debt, and take over the country ;-)

I do however wish that Iceland, Faroe Islands, Shetland and Orkney Islands would return to Norway, where they all belong.
However, with the norwegian capital situated in Oslo, facing southwards towards Europe, I think that is an indication of how these islands would be treated if you did rejoin us.
Maybe we should just kick out eastern Norway, move the capital back to Bergen, and then you guys can join us. I'd much rather have Iceland as a part of Norway than having Oslo as a part of Norway.

@Tjalve Bergen? Bergen is already a semi-independent state in Norway nowadays. According to the Bergen people, at least... So why not Trondheim? Back to the days of Saint Olav!

Or perhaps it will become one of those typical Norwegian 'forced decentralization and give the countryside something to do' initiatives and Hell, near Trondheim, would be made the new one. Now that would be something.

I'm not sure if a 'Great Norway' would work. For one, the attitude towards Denmark would be a cultural point of tension. Where Icelanders aren't too fond of them, Norwegians just love them: it's good to be Norwegian in Denmark, right? And of course the true identity of Leif(ur) Ericsson. And how to treat pineapples and pizzas. The list of issues is just too long.

But then again, I think it's more likely that Faeroe Islands and Greenland will head for independence one day, rather sooner than later. In 1900 there were less than 1/3rd of the amount of independent nations compared to today, so declaring independence surely is a big thing nowadays.

@Karen America knows Iceland exists, they just don't know it's a country! No idea if this is true or not, but the story I commonly hear over here is "Vikings discovered a green island and wanted to settle there, so they named it Iceland, to keep anyone else from wanting it. Then they found an icy island and named it Greenland, to trick people into going there instead." Even without the story (which I honestly suspect is a mnemonic device), a lot of Americans are aware that Iceland = green, Greenland = icy... because if they assume the islands match their names, everybody makes fun of them.

@ArynChris That's not really accurate. Iceland was (according to the most widely accepted history) named by Flóki Vilgerðarson (Raven-Flóki) who settled at Barðaströnd right before an unusually severe winter, and was shocked to see pack ice floating in the ocean (a rare thing here). That said, we have very long winters and a good chunk of the country is glaciated; explorers coming from the southeast and seeing Vatnajökull as they approached probably wouldn't have questioned the name any ;)

Grænland (Greenland) was discovered by Eiríkr "hinn rauði" Þorvaldsson, aka Erik the Red. The key point however is that Grænland was initially a place on the island, not the whole island itself. The presence of a large frozen land mass west of Iceland was already well known at his time. He was the first to discover habitable, green pasturelands on the south and west sides. Now, it's true that he stated that he chose the name to be appealing to new settlers. But it's not like he was "tricking people into settling a glacier" or anything like that - the environment wasn't all *that* much different from his native Vestfirðir.

(Re: "Raven Flóki" - the reason for his name is rather clever, he managed to find Iceland by taking ravens with him and letting them loose periodically. Since they're land birds, they'd fly as high as they could and circle to look for land. If they couldn't find any, they'd have no choice but to return to the boat. But if they found land they'd beeline for it - and he would follow)

@Karen I know what You mean. I once heard Latvian in a cartoon and I immediately told my brother about it. Their accent was horrible but it was definitely Latvian. My mood was uplifted instantly.
Ulliowl

@Karen and @Frost_Marvel, the tale of the naming of the two islands was told at every introduction briefing at the Agreed Area of Keflavik. I know, I attended it in 1978.
Bluesamurai

@DarkMage7280 Who in Finland uses McDonals, We have our own one, Hesburger!