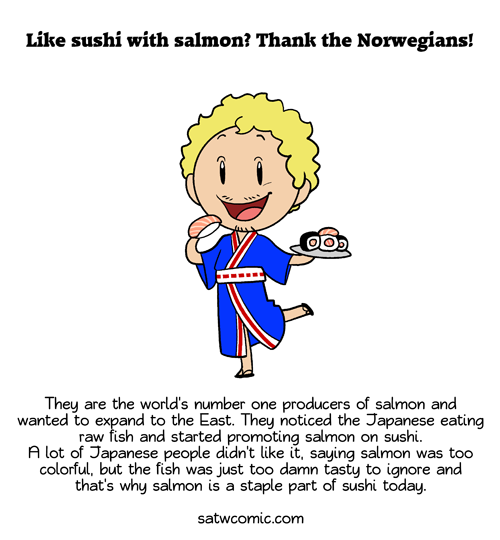 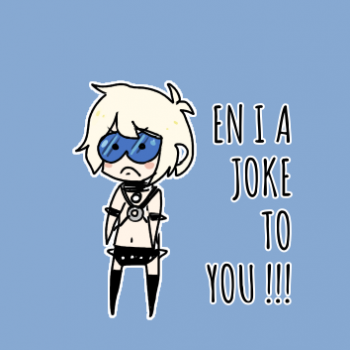 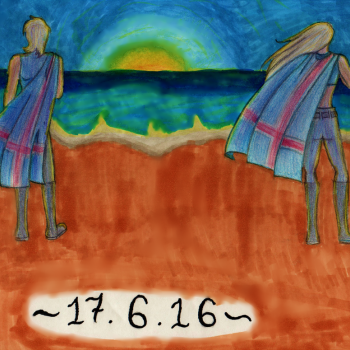 Just wondering why Norway is wearing an Icelandic kimono...

@ImportViking aaand I can't unsee that, thanks!

Where did Norway's fish go? He has no fish on his head. Oh gods no, that fish is a salmon, isn't it?!

@CorruptUser It is better if you don't think about it too hard...
Zenon

New comic late?
Don't stress.
The artist is only humon

Yay!
Only *insert big number here* puns to go before you beat @SchrodySweden and @DanishPride !

I was summoned but I dont have anything to base a pun off so:

What do you hear at a dalek racetrack?

@SchrodySweden Hmm... yeah, not much to base puns off of here. You shouldn’t RACE(track) to conclusions, though.

@DanishPride It really DRIVES me crazy though, yanno?

@SchrodySweden Yeah... we should STEER away from these kind of situations.

@DanishPride WHEEL figure out how to do that eventually, I'm sure

@SchrodySweden Sorry to SPOIL(er) the search, but it seems we’re out of replies! Hopefully we’ll find the puzzles’ answer next time!
SchrodySweden

Got a better one: how do people who are proud of being from Finland win a race? They FINNISH FIRST AND FOREMOST

@SchrodySweden I wasn't really summoning you for a pun but ok

@SchrodySweden
Also, I've sort of been wondering why your username is "SchrodySweden" and your pfp is Norway.

@ABCEastPonymon
Bc I may not be Swedish but I am most definitely Sweden sometimes, so I'm like Schrodinger's Sweden

The pfp is also a reference to this

I think Norway pulled off this outfit quite nicely

"I don't like the way it looks but it's so tasty I can't stop eating it."

Actually never got into sushi. Raw fish is just...no.

@Sorflakne not all sushi is raw fish, heck some of it doesn't even have fish. For something to be sushi it just needs to be a ball or roll of cold cooked sticky rice with some sort of garnish or topping. Popular non fish sushi toppings include cucumber, avocado, shiitake mushroom, and mango.

@The_cogwheel
Cream cheese is another good one
Zenon

@Sorflakne Teeeeeccchnically it's not exactly raw. It's just it kills off parasites and disease by targeted freezing instead of heating. It's more like it's freezer-burnt without over-freezer-burning it.
crwydryny

@Sorflakne my partner had the same reaction when I introduced her to it, I told her to just try it... she not only loved it she ate all my sushi as well, out of a box of 30 pieces I think I had 1 or 2.... yep not making that mistake again lol
Ayrshireladdie

Coming from Scotland I have to say Salmon is the best fish for taste. Salmon Gravalax is the bees knees.

And the tempura comes from the kitchen of the christian monks. For a country know for its centuries of isolation they surely keep expanding the menu with foreign things

@Schattensturm I think after 200 years of isolation, Meiji Japan was ready to try something different. Of course, even when they add something foreign to the menu, they find a way to add Japanese rice or shoyu or something to it.

@GeminiJim So Japan's new food policy is: We can try new things as long as we can make them Japanese. I like that, simple, concise and traditional

@Schattensturm No different from the United States' policy, really.

@Schattensturm It worked with things such as sukiyaki (since there had been no beef raised in Japan at the time - as opposed to today, where very little is, but what there is is some of the best), anpan (bread in general was brought in by the Portuguese as well), ramen (which was derived from Chinese pulled noodles, though just when is debated), and curried rice (which was brought in by British merchants right around the time that they and the US forced them to open the ports up at gunpoint). Quite a lot of Japanese food is like that, really.

But then, as GeminiJim said, the same is true of the US. Anyone up for frankfurters or pizza?
MiskisM

Damn raw fish eaters... When I point that they eating raw fish they start talking "how uncultured you are, not open minded and etc.". When I eat raw chicken or pork or some organ from other animal all I hear "Unsanitary, insane" and retching sounds... Double standarted bastards...

@MiskisM Personally for me the danger of salmonella or something is a non-issue because I don't like the texture of raw fish. Don't like cured salmon either, since it's pretty much the same.
Zenon

@MiskisM
Raw fish is not the be all, end all of Sushi. You can replace the raw fish with anything you like, pretty much
Greenhorn

@Greenhorn ..and then there are those blasted vegans, the ones who not only bitch about raw fish eaters and bleat about raw meat eaters, but also have the nerve to be displeased at raw cheese eaters.
Quadruple standards, I'll tell you what!
stabcutdrink

@MiskisM That would be sashimi. Sushi is about flavored rice, you can have it with pretty much anything you like. Slab of nötkötti on top, still sushi. Some fish toppings are typically served pickled, grilled, etc. It is all about bite sized nice stuff, make it how you like it.

@MiskisM Ah, but what about raw beef? Tartare is generally seen as haute cuisine as well.

Just don't combine it with caviar, white chocolate, and capers. That one didn't go over well with Chef Hellfire.

(It's sort of funny in a grotesque way. If you watch the clip from that episode - any "Hell's Kitchen worst signature dishes" clipdown video on YouTube will probably have it - you can see Ramsay with an expression of, "God, I'm afraid to even try this, but maybe he's found something new and interesting... nope, oh crap I'm gonna throw up". He really seemed to want to be surprised by it, but it was just as awful as he expected.)
ryttyr

As for a comic you could have done something like Japan sharing his Japanese sushi with the gang and Norway, seemingly liking it, pauses and looks at it with a thinky/intrigued expression on his face, after which he tentatively puts his hair fish on the sushi an everyone goes wow with amazement.
Speaking of, where is his hair fish by the way?
Uhtceare

I love salmon-sashimi! Thank you Norway! Mmmm, I could go for some salmon sashimi with a bit of eel sauce right now. :-D
Add comment: Please Sign in or create an accout to comment.