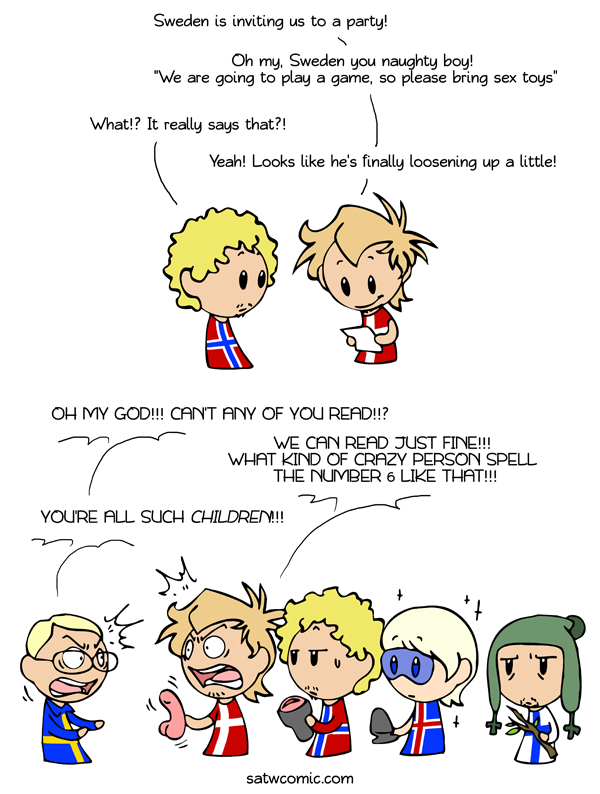 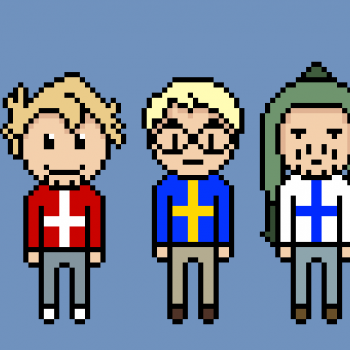 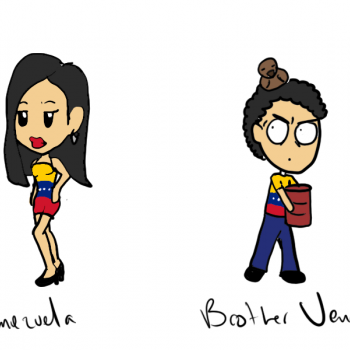 Venezuela and her crazy brother
443 Comments:

@MissStory it's a reference to the number six in Finnish. In Finnish six= Kuusi means, six, spruce, fir, six o'clock and your moon. And since Swedish is the second language of Finland and Finland speaks Swedish he translated it as bring spruce toys.

@Ice0tea Thanks for explaining this, at first I thought this is what Finland used as a sex toy, ouch!
Xarsor

And that's why we have särskrivning.

@emptyribcage It's a grammatical rule in Swedish. While särskrivning is what it's called when you don't follow the rules, it's more famous due to the people making fun of it.

@Xarsor I think I sort of get it hahah thanks

I really want to draw an extra panel for this with Denmark quieting down and saying "Well, while we're here..." and Sweden just shouting "NO!"

@ImTheDevilDog dang i wanna do this as fan art lol
littlefinland

I am very concerned about Finland.

@Baronese no need. We have and always will be crazy.
MikoMae

a stick? i swear finland is the only sane one in the comic
drakyn

@Fluffkin in Finnish 6=kuusi. Also means spruce/fir. So it fits in with the double meaning of 6. Plus Finland might like SM-play with Sister Sweden anyway.
Hinoron

@Fluffkin
There's also a comic in here somewhere about a Finnish tradition of whipping people with spruce switches in between bouts of sauna-ing.

@Hinoron Not spruce swithces but birch branches tied together. And it's not a myth either, we whack each other with those at sauna all the time. It's very enjoyable as it' gets the blood running without really hurting at all (since the branches are soaked in water and the heat/sweat smoothens the skin). I've even heard that some people use sting nettles instead of birch branches, and it was explained in a way that makes sense to me (the nettles, just like the branches would be soaked in water, and with the heat and sweat smoothed skin, the stings wouldn't actually pierce it, but would still release the histamine, which would cause a mild burning sensation). Still haven't been brave enough to try the nettles myself though.
AlephFIN

Ok, since everyone is so interested on Finland's birch branch...

@AlephFIN Oh...that makes more sense than what I thought.
TooTired0ToChoose

I remember in like fourth grade where we got some sex education, after that making someone saying the number 6 was an ongoing joke in my school

@TooTired0ToChoose oh god, my school did that too. Worst part is that I was sick the day we had sex ed so everyone used that against me…
Add comment: Please Sign in or create an accout to comment.