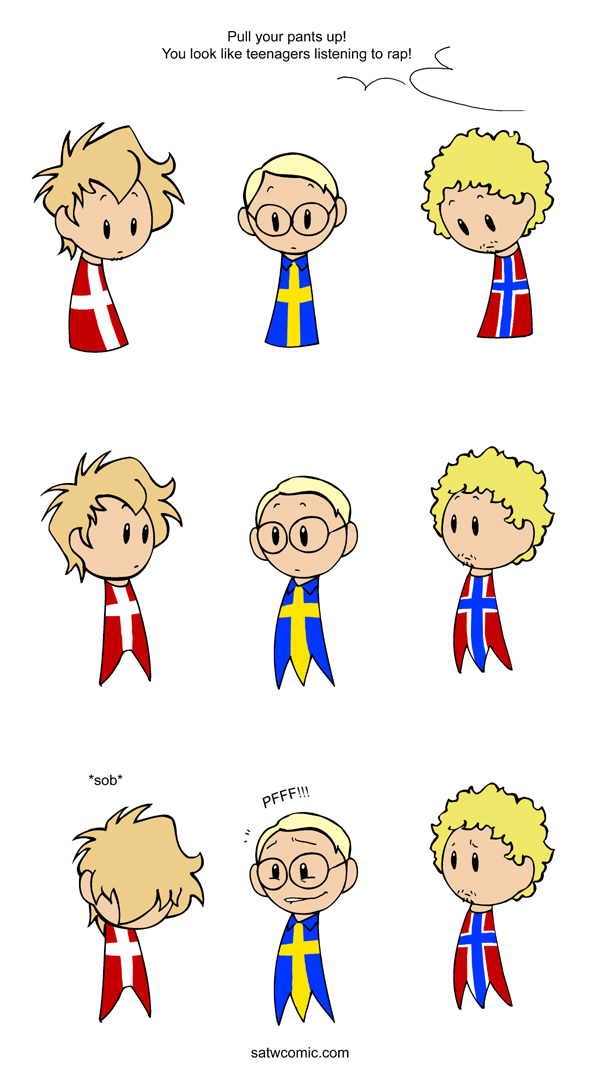 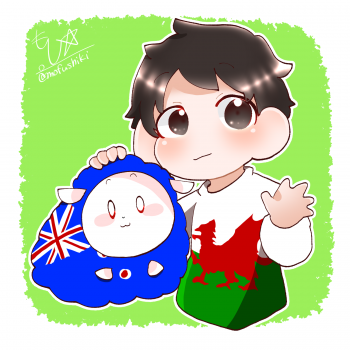 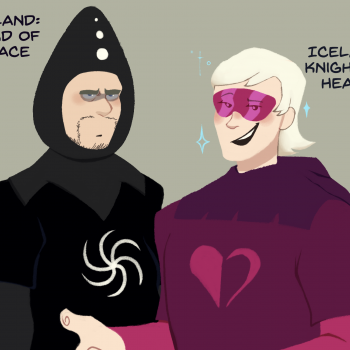 So Norway is on top.
Kyasarin

For those who don't know what state flags are:
A state flag is a variant of a national flag (or occasionally a completely different design) specifically designated and restricted by law or custom (theoretically or actually) to use by a country's government or its agencies. For this reason they are sometimes referred to as government flags. In many countries the state flag and the civil flag (as flown by the general public) are identical, but in other countries, notably those in Latin America, central Europe, and Scandinavia, the state flag is a more complex version of the national flag, often featuring the national coat of arms or some other emblem as part of the design. Scandinavian countries also use swallowtailed state flags, to further differentiate them from civil flags. (from Wikipedia)

By the way, Iceland has the same swallowtail as Denmark (another reason for his obsessive compensating I presume, poor guy) and Finland has his "special lion" on the state flag (no swallowtail).
FelneusLeviathan

What he lacks down there he makes up for in personality


And libido, but that's another tale.
Hinoron

Every time I hear or see mention of teenagers wearing their pants down past their hips, it sends me running to Youtube, trying (again) to find a clip of comedian Alonzo Bodden, telling the story of the origin of that fashion trend. I can never find it.

It's much, much funnier out of his mouth, but I'll try:

Alonzo has a nephew, who liked to wear his pants down with his underwear showing, as is somehow a fad in rap music videos.
Alonzo sits him down to explain where that comes from.
The fad started inside the prisons, and sometimes is shown in prison shows or movies, included for accuracy, but never with an explanation, of why the skinny, personable guy who seems to know everyone's deal has his pants pulled below his hips.
See there's a lot of tough, macho, dangerous men in prison (which is probably why teens are imitating this trend) However there are also a lot of little sissy boys, who very quickly found themselves recruited to be the big fella's "girlfriend" on, like the first day they arrived. Some of them got used to it. Some of them even found they liked it. Not to mention, being the "girlfriend" of one of the biggest guys in prison means most other people won't mess with you. It's safer. Prison sentences rarely line up perfectly, and sometimes the Big Guy leaves, and our skinny "girlfriend" (who, remember, has decided he kinda likes being the "girlfriend" by now) find himself in the market for a new Big Guy to bend over for. How should he advertise that his back road is now open to any and new comers? Well it's very straightforward and unsubtle: he walks around the yard with his waistband down under his ass cheeks, for ease of access for whomever wants to take him up on his "offer".
Soon as Alonzo finishes telling this story to his nephew, the nephew yanked his pants up so fast he gave himself a wedgie, and the next time Alonzo saw him, he's got them up to his nipples like Erkel, firmly secured with three different belts!

I love Norway's expression.. like he is sad Denmark is sad and not snickering like Sweden *hugs Denmark*
Kimpes

Denmark does apparently not have a wee-wee
Moonlightsend

@Squawk Tell me about it...