It was very important to me that England would dart Ireland over some trivial bullshit. 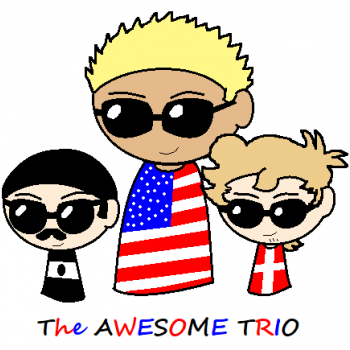 There is a problem when one of your biggest museums is just shit you stole from everybody else.

@avalongirl5 Not just the UK, the Louvre in Paris has things from other countries too. (Still waiting for Grandmaster de Valette's ceremonial sword, France).

@LaVallett1 : true, with every war, France added new paintings and statues to his collection. And England took a lot of those treasures after Napoleon's demise (Sto*** of Ros****) Karma, guys, karma...
DCWhitworth

@DCWhitworth Yes, but the ceremonial sword was looted by Napoleon. At least the sword he used to fight with is still kept in a church (forgot which one) on display here in Malta.
VoidTorcher

@avalongirl5 But surely the point of museums is to show people things from somewhere else ? Also a load of stuff that was "stolen" was in fact being ignored/neglected/damaged etc and might no longer exist. We took it, cherished it and preserved it when they didn't care, but now they do care they want it back and we're thieves ?

Does owning the bit of land now when something was found on it centuries before entitle you to that thing in perpetuity ?
Shouldn't museums be there to educate people about other cultures ? Isn't that what the modern world badly needs ?

Not saying you're wrong, but that the answer isn't black and white.

'@DCWhitworth'
They "didn't care" because history museums and archaeology were pretty new modern concepts that hadn't gotten around yet.
Also hmm, why was your country in those places again? Just going around protecting artifacts surely, yes that was the reason.

"Does owning the bit of land now when something was found on it centuries before entitle you to that thing in perpetuity ?"

Yes. It's cultural heritage. Pretty sure that's UN law even.
Also "centuries"? When the heck was the UK (well England since apparently it's centuries now) taking these artifacts and things centuries ago. Your imperial heyday was like 130 years ago champ.

"Shouldn't museums be there to educate people about other cultures ?"

That's why you can ask for pieces, and have traveling exhibits, which countries like to do for various reasons.
On that note we should put your post in a museum of "Dusty Colonial Attitudes".

"Not saying you're wrong, but that the answer isn't black and white."

Stealing is possibly good if you do it as an oppressive empire because the savages don't care. Truly a debate.

This might be a stretch but this is why the Dementors went after Harry Potter and not Ron Weasley. Lol...
poodle_doodle

Greece: Does this mean we can have the Parthenon marbles back?
India: And Tipu Sultan's sword and the Koh-i-noor diamond?
Egypt: I'll be happy if u give me literally anything back, so that my Pyramids won't be big empty cardboard boxes anymore.

@poodle_doodle And...um...stuff from China I don't know or care about until I see them in an English museum.
MadnessInTheMethod

@poodle_doodle Pretty sure Spain would be keen on getting Gibraltar back.

@MadnessInTheMethod
We didnt steal it though, they gave it to us .
Under the terms of the Treaty of Utrecht, Spain ceded Gibraltar to Britain in perpetuity in 1719.

@Mistwraith I mean, after a war, which while technically making it legal, its not as simple as that, and further under a previous government.
However, since AFAIK the population of Gibraltar wants to remain part of the Union, I think their voice should be heard, not the voices of other people.
ferrett

@MadnessInTheMethod But all the people of Gibraltar that I've met are very happy to be part of the UK, and don't like the idea of going back to them. They like the country, but after there was a referendum in which Spain chose to stay, Spain closed the boarders and made life hell (this is all going off what people have told me).
AkRaven

'@AkRaven'
So the thieves should return it to other thieves? Not sure that's the idea here.
PaxRomana

@poodle_doodle I think Ireland would also like it's northern half back as well. And maybe some form of apology for letting them all starve to death during the famine (Ireland's pre-famine population was greater than it's MODERN DAY population).

i just moved to ireland and i heard a funny version of how they got their freedom or whatever at work, couldn't help to picture it with your characters x) guess it was during first or second world war, while england was busy fighting, ireland came and asked for their freedom and england was like "yeah yeah, do whatever you want, we're busy!" xD

'@iheartNORWAY'
Not sure which event this might be referring to.
The actual independence of Ireland happened shortly after WW1, Britain unfortunately wasn't all that distracted anymore and lots of guerrilla violence and paramilitary abuses occurred before Ireland got independence.
They were still part of the British Empire though, in the same way as like Canada and Australia at the time. So "independent" was kind of gray, and it was changing throughout the lifetime of that status.
Then as WW2 was starting to bubble up in 37', Ireland broke with all that British Empire nonsense entirely.
FrankHarr

And it was a tad more invovled, but that's a fair amount of it.
melladh

My mom did this with gift advent calendars every christmas when I was a kid, because I was too young to remember anyway...

She had to stop when I was about five and I started remembering last year's items, and said "Now I have FIVE wise men for the nativity scene!"
Ulliowl

Yes, Gingers have no soul so in the Zombie apocalypse they will be safe. The zombies can see them the cannot figure out if they are food or not.

@Ulliowl actuly thats just brains, so we'd be absolutly fucked in such an event. lol
TheChief

This is Anglo-Irish politics in under twenty seconds.
RainbowZoo

Irish Catholic, auburn haired and during my wisdom tooth extraction at age 13, I counted from 100 and passed out at 69.

I put up quite a fight at an office using anasthetics. I actually bit my dentist because I was still conscious.

I have 5 aunts and uncles with red hair. They too had dental work.

Recently talked with my mother's sister and her son, my older cousin, has a similar immunity and actually punched his dentist because he was still conscious.
lunayoshi

Can confirm: am redhead, get barely any side-effects from strong drugs, esp. narcotics. In the meantime, I get horrible burning from spicy food, I can't stay in the sun longer than 30 minutes without protection, and goddamn, I'm hypersensitive to pain. The hypersensitivity + drug tolerance = HELL in bad situations.

I guess in that case, Ireland is my patron saint. XD Though the furthest west my ancestors came from was England, supposedly.
Mistwraith

When i was 16 they finally decided i needed my tonsils removed (after 2 years of sore thoats/throat infections) so i'm in the theatre and the aneasthatist gives me the shot in the drip and tells me to count backwards from 10 slowy, i get to 1 and then say, now what ? To this day i still remember the look of shock on his face !!
Though i dont remember much of it, i started to come round as they were wheeling me out of theatre, i've not ginger i'm brown haired, and my medical notes actually mention this incident, as another operation later on the surgeon mentioned it.
(I've had barely any throat issues since even though people without tonsils are supposed to get more so i'm told)

@Mistwraith This always happens to me. I just keep counting in negative. I usually pass out pretty soon anyway. I remember one time saying: Hmm, I think I am still conscious.. Then the doctor reached somewhere and I remember nothing.

@Carewolf But it is not pain-killer that knocks you unconscious. It is a different drug. And it is the pain killer red-heads need more off (If I remember correctly).
Add comment: Please Sign in or create an accout to comment.