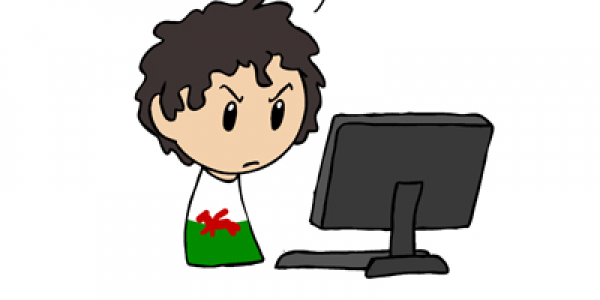 Welsh has several words for 'yes', but doesn't really have a word for 'no'; they basically say 'not yes
made by Anthraxia

They say the same about Japanese, but that's wrong.

In fact, I've heard that most languages originally didn't have words for "yes" ar "no", but have also heard that the usul way was to get a "no" first, before developing a "yes", to the point that one typical division during Middle Ages Western Romance vernacular addressed which word they had developed to say "yes": the northern langues d'oïl (modern French and closely related languages; in French it has evolved to "oui"), the central langues d'oc (languages from the Occitan branch, even though Catalan has ended up changing the word they use for Spanish "si") and southern langues de si (Iberian Romance languages other than Catalan, even if Catalan currently uses this word).

I've heard that the proper way to answer before was to repeat the verb of the question in affirmative or negative form, depending on the answer.

@Kemm That's actually very constructive answer and enlightening. Thanks for sharing your knowledge, I'd have never guessed.
EclipseMaster459

Welsh, the closest language we have to pre-roman britons. Must of been a mess before the romans and later germanic settlers drove them to ground in wales when they didn't have a ready way to tell them no, I'm not giving up my land :P
Mae

In Finnish, no is a verb and it conjugates.

@Mae What does that mean?

Wonder whether in other languages there is a word which really equals German "jein", a synthesis of "ja" = yes and "nein" = no.

"jein" is used fairly commonly, when neither "yes" nor "no" fully apply....
jowi

Also classic Latin doesn't have words for yes and no. It hadn't been invented yet at the time ;)

@Carewolf Actually, (forgive is I misspell this, my last Latin lesson was 50+years ago) in Latin you could say "minime" ( pronounced minnie-may) and it meant something like, "no way".
But it wasn't considered good form.

@Carewolf The Romans did have the words non and sic. Non means not, but could be used as a no, where it could be used to state that a certain thing is not the case. Sic means thusly/in that manner, which for all intents and purposes means yes
Nixonlee999

@Kemm
Yeah. Saying "no" in Japanese always feels awkward but that might be because "no" in English can be used to mean many different things such as "that's not true", "don't do that", "I will not...", etc. Where as in Japanese "iie" (no) can't fulfill all of those meanings like "no" can in English.
OohSomeIvie

The same thing in the Irish language. There really is no exact word for “Yes” or “No”. Thus, modern Irish speakers mostly decide to use “Tá” as yes but it really means “to be” and “Níl” for no but again, it actually is the most frequently used negation of verb.
Jegalsklarkultur673

The same thing in the Irish language. There really is no exact word for “Yes” or “No”. Thus, modern Irish speakers mostly decide to use “Tá” as yes but it really means “to be” and “Níl” for no but again, it actually is the most frequently used negation of verb.
Sisu

Wouldn´t they still have to use the word "No" if they said "Not yes?" ?

@Sisu Nope. "not" and "no" aren't the same thing. I don't know Finnish, so I don't know how it works for you, for Welsh , you'd get Ydy, Oes, and a bunch for others for yes, and the equivalent for no would be "Nac oes, Nag ydw" etc. Nag is closer to Norwegian Ikke than Nei, if that helps at all?

@commissarfeesh Finnish negation is a verb, if a bit lacking in conjugation. En, et, ei, emme, ette, eivät. Any other use for negation gets ei. (including "no"). Other verbs get things like tense and mood...

@Suominoita Thanks! I'm always fascinated at learning how different language structures work. And I'm always amazed that anyone learns English successfully as a second language! It's so bloody awful! And yet people do it so well! It's one of the reasons I'm so determined to become if not fluent, at least conversant in Norwegian.
Soulbourne

@commissarfeesh So would a better translation than "Not yes" be "I disagree" or "I refuse"? Or is the whole not yes thing more than just a bit of translation jankiness?

@Soulbourne Not exactly, as those are adding a first-person subject, which changes the meaning - you're not just answering "no" anymore, you're now specifying that you're personally in disagreement.

"Nac" (often mutated to "nag" depending on the following word - Welsh does a lot of mutations, it's a pain) - doesn't really get used by itself, but it's used in conjunction with specific other words to negate their meaning. So Welsh speakers do literally say "not yes".
Suominoita

Finnish has these expressions: "Joo ei" (Yes no), "No ei kyllä" (Well no yes) and "Ei mutta joo" (No but yes). It is rather funny how those words get mixed up... dictionaries don't work here, do they?
Edhellas

That's not something I would have expected. Why's that? Are welsh just generally pacific/prone to compromise that they don't need to be assertive when they don't want something?

@mfoweraker Oh, I see! That's a good way to overcome it x) Thanks!
FreeYourHate

@Edhellas We're not exactly prone to peace or compromise. More prone to telling people to fuck off when we don't want them around or want to deny them something. There's a generally accepted term for no but I forget what it translates to literally.

@FreeYourHate Oooh okay XDDD So much for my naiveness x) Guess it works out well too tbh.
Hinoron

@Edhellas
Nothing too odd about that, really. There's plenty of expressions in English that literally use negative phrasing, but figuratively have positive meaning. In most cases, the more roundabout way is considered the more polite phrasing.

Wait is Welsh an actual different language because I'm pretty sure everyone speaks in English...

@IcelandicAustralian So by your danish logic, faroese is no language either, because everyone there also speaks danish?

@IcelandicAustralian #9577794   Welsh is a very different language than English. Much more so than Danish and Faroese.

@IcelandicAustralian It is estimated that 20% of population in Wales speak fluent Welsh and Welsh IS recognized as an official language along with English. Furthermore, Welsh medium education is on the rise because the students at these schools also seem to do better in math and science. Many parents also want their children to have the chance to speak Welsh which is the language that their parents or grandparents were publicly shamed for speaking. Google the Welsh knot.
https://www.bbc.co.uk/news/amp/uk-wales-45611374
Danelaw

The Welsh don't want to be "disagreeable".

@Danelaw Get out. Just get out, I never want to see you again. No.
ThatOneWelshGirl

// Dim is the common term for No

@ThatOneWelshGirl Dim is not quite "no" though is it? Its more "none", but a lot of people have taken to using it because they are used to English havinging a clear no. A lot like Na.
Add comment: Please Sign in or create an accout to comment.