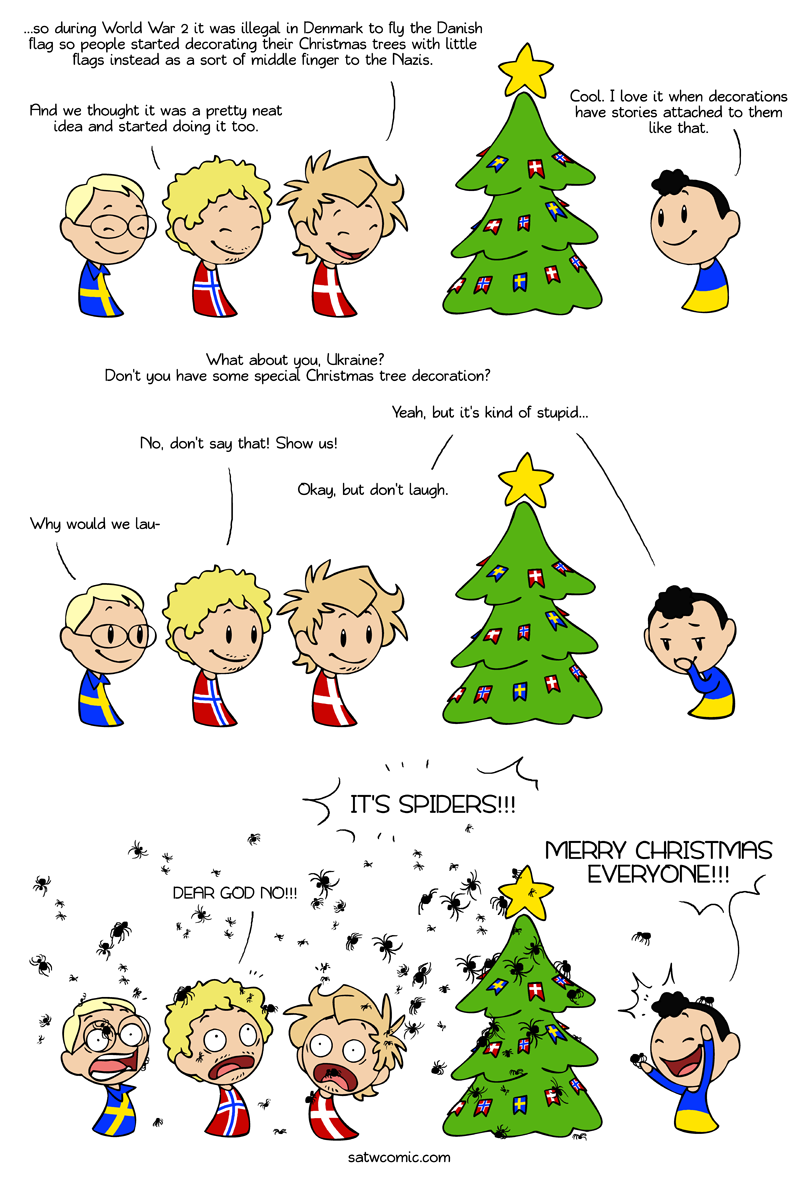 The Legend of the Christmas Spider is actually really cute.

A poor woman was living in a small hut with her children. During summer a pine tree started growing out of their dirt floor and the children tended to it so they'd have a Christmas tree in the winter. However, when Christmas came around they couldn't afford decorations, let alone food and went to bed sad and hungry. The next morning when they opened the windows the sun fell on the tree and revealed that a spider had covered it in cobwebs that glittered like gold and silver. When they looked closer they saw that it was REAL gold and silver. From that day on they always had plenty. 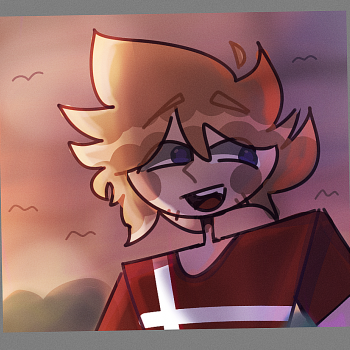 Look at him Strawberry blond. 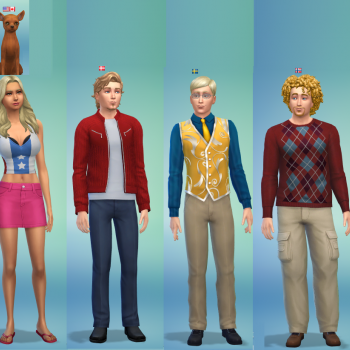 I'm Ukrainian and that's the first time I heard of this

@xonxt Perhaps it's like the Weihnachtsgurke, and was actually created by Ukrainians in North America?

@yellow1357 umm.. could be. It might also be a tradition from the Western Ukraine, because I live in the Southern part and I've never heard of placing cobwebs or spiders on the tree.
xonxt

@yellow1357 small update: I went to ask my parents, particularly my mom who lived in the Western Ukraine. This is literally the first time either of them heard about it.
I found an article about it on Wikipedia but strangely enough there's only an English version and no version in either Ukrainian or Russia, which makes me think this 'tradition' is bullsh#t.
delucus

@Refur The thing that amuses me most about that story is that Iceland doesn't even have any native cats. I mean, you'd think it would have originated somewhere where there actually are cats that could be used to scare kids.

In Sweden cats are recorded as far back as the 5th century - but then only sparsely, being brought here as pets.

It wasn't until Scandinavia got the black rats (who are not indigenous to our region but migrated here from the continent) in the 12th and 13th century that farmers and grain merchants turned to cats to hunt the rats that where eating out their grain stores.

By the 13th century cats are protected by law as they where seen as valuable property for their rat catching skills. Anyone killing an owners cats where fined for it.

By the 14th century they're found on basically every farm and there they have remained ever since - catching rats and rodents.

But since then we've also upgrade them to be pure house pets and companions of course.

I expect their history is much the same in Norway as it's been in Sweden and as such they where probably brought from there to Iceland as soon as they got the black rats over there as well.

Which would have been about in the same time as the rest of Scandinavia, as rats ability to stow away on ships depend on their size.

They couldn't very well stow away on the Vikings open longboats as they where spotted and killed.

It's not until the larger trading vessels like the cog's begin to traverse the seas in the early middle ages that rats can manage to cross them undetected deep in the bowels of the ships, spreading to new lands.
NaCltyGrl

@Refur Love the Yule Cat. I have a cat who bites me in the morning when it is her feeding time, but somehow this makes me love her more (it's just her way of self-expression).
SaneAmerican

Spiders and Pigs? This conversation is becoming "Charlotte's Web. "
Zuperkrunch

It's from ukrain? Not german?

I was expecting something about "Carol of the Bells", actually
Ziebenhaub_the_Texan

@Ziebenhaub_the_Texan I must admit that I am a bit dissapointed that Chernobyl didn't create radioactive mutants with superpowers.

@Rogers Someone would probably find a way to make money out of that if that happened.

@ScanianDreng Unless the mutants kill all humans first.

@Rogers They’ll probably kill themselves when they find out the fucked up and almost plain evil things that members of our species do.
comrade_Comrade

'@Rogers'' #9713331' that's exactly what radioactive mutants with superpowers would like you to think.

@comrade_Comrade So that is why the not melted Chernobyl reactors were running untill 2000. They were obviously making more mutants.
RadBaron

Dear Santa Humon:
Please send me a new computer monitor for Christmas, as I seem to have killed the last one with fire.

and now the spiders are going to crawl into their mouths. ah, i see one all ready has, in Denmark's mouth. Soon the spiders shall lay their eggs in them, and use their poison to "control" Sweden, Norway, and Denmark. Ukraine's plan is all going together. then, he will rule the world along with the spiders. Unless of course, they all ready got to him, for that may be his hair, or it may be spider eggs. of course, it won't matter soon, for the golden age of the spiders has already begun. Soon, at least. Very, very, soon.
Add comment: Please Sign in or create an accout to comment.