Anyone who has been to a Far Eastern country can tell you that it's considered incredibly disgusting to blow your nose in public. Oddly enough it's not looked down upon to sneeze loudly with an open mouth or spit on the street in places like South Korea. 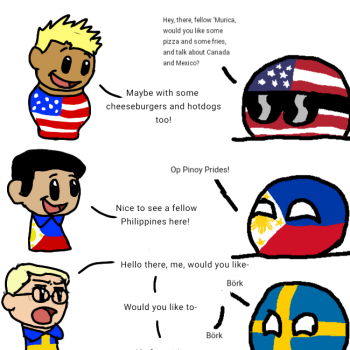 Some can understand each other, some don't.
162 Comments:

This is actually untrue, sneezing loudly is just as considered disgusting as blowing your nose in public. The expectation is that you would wear a mouth mask if prone to sneezing (sick, allergies, etc).

@iEatEmoKids In the last panel, I wished for brother Japan to join, wearing such a mask, perhaps sending a stack of masks to brother Korea by robot. Or handing them over with a really long stick.
LoveIsLoveandfood

@Zeust so.. Poland and danish are actualy siblings?

Twins even if I remember correctly

Aaaaa also, the flag on South Korea's shirt is wrong in the last two panels.... XD the red is supposed to increase towards the left, the blue to the right and not the other way round.
Liki

@chaosgirl13
At first i couldn't believe it, then i saw pictures.

@Liki What do people in india do?

@Liki They don't exactly have an abundance of toilets

@Agrandoldtime
Neither do we, yet you won't see a group of people taking shit together in Serbia.
Myrica

@Liki Well, at least they have a campaign going for everyone to get access to a toilet, by the end of the century or so. Including all those villages which missed the invention of the outhouse by a few millennia.
chaosgirl13

@Liki
just to make sure we're on the same page, are you referring to the world's largest toilet?

@chaosgirl13
We are on the same page

Can you please make a comic about the philippines offering sweden or norway biscuits of hers called Fita? It's great, it's fish flavoured!
https://cdn.shopify.com/s/files/1/1493/0474/products/Fita_Spreadz_Spicy_Tuna_Flavor_90g_large.jpg?v=1488340151
HelsinkiAngels

Kind of a thing here in Iceland, too. Not as much of the spitting, but a hell of a lot of snorting, and not a lot of nose-blowing. Best case was when I was talking to this extremely well-dressed lady, with the sweetest nature. Totally thrown off guard when she started snorting.

@HelsinkiAngels Actually snorting (meaning pulling up slime and nasal liquids by inhaling fiercely) is much more healthy than blowing one's nose. The high air pressure caused by vigorously blowing through a (partial) blocked nose presses everything including germs into the paranasal sinuses. Which are nice warm and humid semi locked cavities where named germs can live long and prosper :-)
Spitting and coughing or sneezing without measures to stop the infectious spit flying all around the room does not harm the spitter's, cougher's or sneezer's health, but everyone else's.
Lessons learned: use a handkerchief or tissue to catch your germs when sneezing or coughing (or your elbow, otherwise you get the infectious stuff on your hands ready to distribute everywhere you touch) to protect your fellow humans, and snort up all that stuff to guard your own health. And don't spit under any circumstances.

@Eldkatten Good thing I didn't mention anything about health, but thanks for the info?
ThorirPetur1619

@HelsinkiAngels (an Icelander here) I never really got how blowing ones nose is any less disruptive than sniffling/snorting, much less how it is not concidered disgusting as well. I mean, loudly removing ones mucus from ones nose is better than audably, but much less so, keeping it in ones body. I mean, if it is really bad and you're sniffling every second or so you might blow your nose, but you go to the bathroom to do it rather than to in publicly in front of everyone else.
Of course it is not really thought to be outwrite rude to blow ones nose publicly (it is distracting as hell though, so expect some attention), but there are also some places one should NEVER blow ones nose. Prime example being at the dinner table. I remember once reading a complaint of sorts that someone wrote about the lack of table manners in Iceland (which, ok, it is true we have less than some other countries) and one of the things he mentioned was people snorting rather than blowing their nose. And, I mean, that's not lack of manners, that's DIFFERENT manners. You DON'T blow your nose when you're eating. If you really want to blow it, excuse yourself and go to a bathroom or something, but don't expect the fact that it's ok in your country change that it isn't ok here.

Sorry for my rant here xp. Wasn't really saying againts your comment, your just happened to grab my attention when already kinda ready to write about this from the comic.
Basically, I do get that different cultures mean different things are concidered rude and/or uncouth. But it does kinda annoy me when people find it strange that other cultures manners are different from their when, really, there aren't really that good reasons for theirs to be concidered more natural or better than the others.

Anyways, sorry again for bothering you with this. Wish you a good day, and a happy new year

"That is not lost which falls from the nose into the mouth." Danish proverb.

@Klaus but in this case better just blow from nose..lol..
albertest

@albertest Happy year to you too. But its motherf***ers. Remember to add that too... And dot to end of sentence!

Brother Korea is definitely related to Brother Finland in this instance....