Return of the lovable dork

You would not believe how much I've missed Regular America. He's a well meaning buffoon which is why I loved and used him so much. He does stupid shit but is never mean spirited, and throughout the year I kept having ideas for comics, thinking "This would be PERFECT for Ameri- No wait, if Trump America does it it will seem horrible"

So yeah, this is me going "fuck this shit!" and bringing him back. Trump's foolery will be handled by the skin-blob from now on. 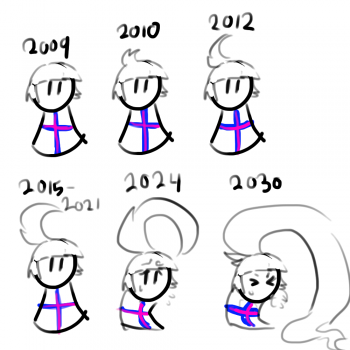 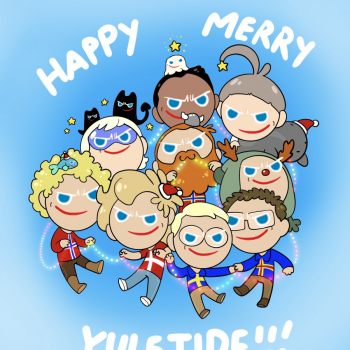 " Trump's foolery will be handled by the skin-blob from now on."

So you're going with a realistic approach?

@Gecko This is not a realistic approach. In order to be realistic, Brother America would have the following characteristics:

1. Lead poisoning
2. Loud, grating loutish behavior
3. A superiority complex
4. Abusive even when others try to help
5. Be dating *daughter* America and maybe *son* america (but he'd completely deny that one) instead of Mexico
6. A complete inability to take criticism
7. Be utterly racist.


I could go on, but I'm pretty sure I've passed the limit of the conservative attention span.
samin

@samin Yeah, that could lead to some interesting stuff.
danish_guy

@samin what would happen if it attached itself to nazigermany? it would be the ultimate nazi. the final boss. MECHA HITLER!!!

It wouldn't attach to nazigermany.
It would sit in nazigermany's lap and be petted.

@samin
Great Idea.
Attached to England it would be Nigel Ferrage and to Austria Heinz Strache.
MannBabe

YOU MADE ME LOGIN!! I NEVER LOGIN!!
I felt a weight fall off my shoulders for this comic. I <3 this comic.
"Trump's foolery will be handled by the skin-blob from now on." thank you!!

@MannBabe I felt a weight fall off my shoulders for this comic.

The skin-blob seems appropriate. Trump's like a parasite, no real thoughts of his own, leaching the precious substance from the host until it withers into a husk and dies. So glad to have Regular America back!
NorwegianAmerican39

Thank you! We're not all bad.... Some of us are perfectly normal! Just not Trump and his batshit crazy alt-right supporters...

@NorwegianAmerican39 WOW thanks. So if you like some of the things Trump does, you're a crazy alt-right supporter. Don't stereotype please.

@Jflores227 Depends on which those things are. If those things include the Wall or the Muslim ban amongst other things then yes you are.

@Drazahir I only support his pro-life opinions. Sorry for the confusion.

@Jflores227 No problem, while I don't agree with it that's at least a position that I can respect.

(Russia in case he changes it)

And There Was Much Rejoicing!
TheDungen

Damn it for one hopeful second I thought this mean Trump has gotten kicked out of office.

@TheDungen All in good time... Mueller will indict him, or his cabinet will find him unfit for office, eventually.

@HavensFire The sooner the better, I say. Also, can we kick Pence out while we're at it?
SomeRandomSmuck

@HavensFire
Haven't been following it too closely, but what is he getting indicted on again?

@SomeRandomSmuck Honestly, we're not sure... not because he didn't do anything, but he publicly brags about half the things he did (like his so-many violations of the emoluments clause and tax evasion), so we're not sure what will actually force the republicans who have gone on record with statements like "It would not make sense to investigate other Republicans." to actually take action.
xana55

@TheDungen Unfortunately it's not really a benefit to anyone to remove him from office until we can find a way to get rid of the Vice President as well. Mike Pence is potentially far more dangerous then Donald Trump if only because Mike Pence is both a career politician who understands the political system and a dangerous zealot who has a history of enforcing his belief system on citizens under the jurisdiction of whatever office he holds.
BanditCharizard

Thank you for splitting them. Not all of us support the Cheeto in Chief

@BanditCharizard Less than half of us even supported him for president... And his support has only waned since the election. ;3

@HavensFire I'm assuming you're firing at the electoral college, so my response is what follows:
I don't think it's very fair for California, Illinois and New York to decide the political leaders for the rest of the country. (They have the most population, and thus have the most power)

@MuricanConservative All three of those states voted against him, so there are a few flaws in your logic. Plus Texas has more than New York or Illinois, same with Florida.
Drazahir

@MuricanConservative One person, One vote seems infinitely more fair than a person in Wyoming essentially having 3.6 compared to an inhabitant of California. The fact that a candidate can win the Presidential election with only 22% of the votes seems outright undemocratic even.

Can the US even be called a democracy with such a system(and yes a republic is a subset of democracy)? I'm guessing that most people would answer no to that question if they applied a neutral position on the issue(i.e if it happened in another country than their own).

Incidentally the problem with gerrymandering would also go away since you wouldn't need districts anymore, other than as a convenience to make counting the votes easier.
OutlawRhysk

@BanditCharizard I always figured he was a really bad case of Agent Orange.
Cris

Except Trump has never been alt-right or a Nazi. I can understand you not liking the character, but calling Trump that is completely uncalled for.

@Cris Sister America called him a nazi, not Humon. Also I think you misunderstood the joke. Read it again and you might see that Brother America explains why it's silly to misuse the term "nazi" like this.
HavensFire

@Cris Well, he sure could have fooled me. Extreme nationalism, xenophobia, religious bigotry, provoking other countries... And then his defense of actual Nazis and white nationalists... He may not be a Nazi himself, but he's a good bedfellow.

@HavensFire Please prove all of this in detail, and provide the sources where you got this information; because I've never heard or seen that. And when those things have been said about Trump, they later have been disproved by others. But anyway, please try and prove your downright wild claim.

@MuricanConservative What rock have you been hiding under, Fox News?
We can start with his defense of neo-nazis who literally killed someone as "some very fine people" at the Charlotte rally, followed by spouting claims (lies) about protestors against the nazis being the ones trying to kill people.
He has repeatedly made all sorts of anti-muslim bigoted statements, even his "travel ban" targets based on religion (he even spouts off about that on twitter himself) and does Not block the countries that have Actually had terrorists come to the US. His statements are not even just about foreigners, but even making bigoted statements against the family of a veteran killed in action, because they are muslim.
He went on a tirade denouncing a US federal judge, claiming he was really a Mexican and not legal to be a judge, because he ruled against him.
Trump has been sued, repeatedly, by the US govt, for refusing to rent properties to blacks. The State of New Jersey has fined him for having black card-dealers removed at his casinos. He has been sued for refusal to hire blacks. He is on record with such statements as "I’ve got black accountants at Trump Castle and Trump Plaza. Black guys counting my money! I hate it, The only kind of people I want counting my money are short guys that wear yarmulkes every day.” and “I think the guy is lazy, and it’s probably not his fault because laziness is a trait in blacks. It really is, I believe that. It’s not anything they can control.” and then there's the Central Park 5, five wrongfully accused black teens, which he spent thousands of dollars lobbying for the execution of, and even 14 Years after they were Proven Innocent by DNA he still stated on the record that they should be executed.

@MuricanConservative Wow, you're serious ? Have you ever heard about something called "medias" ? oO

Charlottesville. Also, Roy Moore's accuser got her house burned down. You can't tell me Trumpers didn't do that.

What brings you to this fine website, anyway? You're clearly unattached, else you'd be busy fucking either a cousin, a daughter, or a transvestite.
ThorsomeTarmukas

@HavensFire
[Extreme nationalism, xenophobia, religious bigotry, provoking other countries... And then his defense of actual Nazis and white nationalists...]

@Cris I think he's alt right from a european point of view. I mean if you compare to european parties, he's verrrrry much alt right

@Ynk he is far from as good as europien partys this man is the world worst president.
davos23

@Cris there's a term for people who defend nazis instead of opposing them. that term is: NAZI

@davos23 the term for someone who is bashing on someone else for their beliefs and pov, not marching and hailing the multicultural mainstream could also be NAZI... and red nazis are the worst ;)
NeframeTheCosmonaut

@Cris To be honest, I don't hate Trump. I can't hate him or anybody. Few reasons why: He's our president, we must respect him even if you might not like him. And, two, he does SOME right things. And I'm not what some people might say "A white supremacist homophobic Trump Lover", on the contrary, I'm an American born Polish-Mexican-Russian-Welsh-French-Irish dude. Although I have to admit, I DID miss old America.

@Jflores227 Why do you have to respect him? He won the election yes, but why does that make him respectable?
He's done absolutely nothing to earn or deserve any respect since assuming the Presidency.

Respect is earned, it's not something that's inherent to a position.
inkicolite-

All of your guys' profiles go with the conversation so perfectly

@inkicolite- Hopefully you don't think Russia possibly helped Trump win the election. I still can't believe why people blind themselves by thinking Russia had to do with the elections.

@Cris I can't believe you got more dislikes than likes. Your comment was very respectful not offending anybody's position, but showing respect for our president is very amazing. Great job my friend and don't let anybody's opinion change yours.
Betelgeuse9

After reading some comments: Stop calling Obama, Hilary and the Democrats left wing! They are not left! They are right-wing only that they are not as extreme as the Republicans and Trump. The only one who was left in the 2016 election was Bernie Sanders, none more.
The democratic party is right-wing, the republicans, far-right wing, learn it.
Or I am wrong and what is "left-wing" there in the north is right-wing here in Latin America.
Add comment: Please Sign in or create an accout to comment.