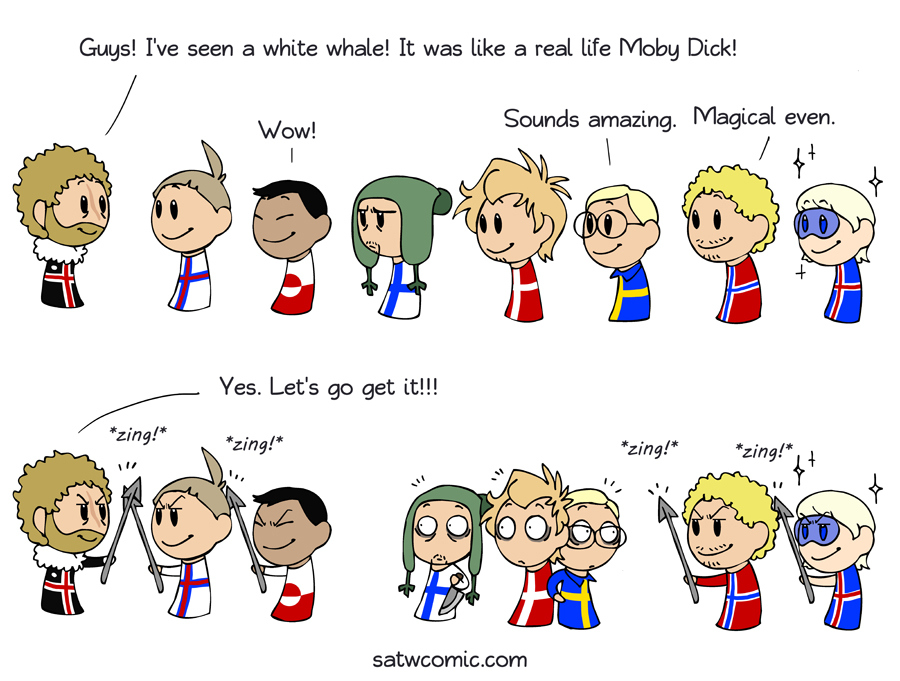 Moby is a Dick

Most of the Nordics hunt whales, though not usually humpback whales, so that's purely for the joke. 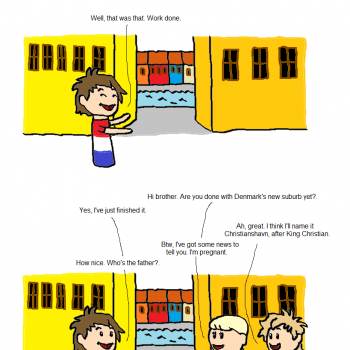 The history of Christianshavn and Christiania 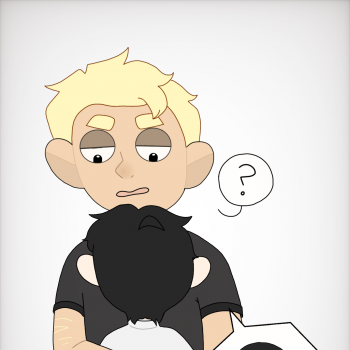 While I'm not fan of whale hunting you need to look at the countries in question. If you notice who don't hunt whales, it's the three countries with plenty of arable land (room for agriculture). The 5 "hunters" live on rocks, in extremely mountainous countries or countries too cold for farming.

It's easy for us to criticize the Faroe Islands or whatever for their whaling, but they live on a what's essentially a rock in the middle of the ocean. They can't just change to a farming culture like we have here in Denmark. It is (or has been for some areas) a big part of their food. They're not doing it for sport or as a luxury thing or whatever.

My logical side also has a bit of a problem seeing why it's worse than how we treat cows, pigs, chickens etc. in the rest of the world. As long as they're not hunting endangered species (Looking at Japan for a moment here..) why is worse than killing a cow? I bet the whales have a much better life than our livestock. They're not stuck in cages, in small pens etc.

@Corson I've always assumed all whale species were endangered because of the reactions to Japanese whaling. That's also what turned me away from the whalers in this comic until I read your comment.

@Zeust I've always assumed that too, because whales are usually very large animals and very large animals tend to be endangered species (because they have no natural predators, and because each individual impacts their environment a lot, they tend to have a very slow reproduction rate which in turns cause them to be endangered quite fast when their ecosystem suddenly change or where they become prey to big badass humans)
NorwayViking

@Corson another reason would be that All of those countries have been a part of the norwegian kingdom and discovered by norwegians too, so not only language, but traditions have been saved there (because of norwegians settled down). It has always been a long tradition in Norway. Maybe your idea is because it is like that too. idk

@NorwayViking Sorry, I haven't really visited this site lately.
While you're right about Norway having owned the areas and I'm sure you're also right about them bringing culture with them, I'm pretty sure any nationality settling on a rock in the middle of nowhere would have ended up killing whatever they could to survive. It's not because they're Norwegian inspired but because they'd have died otherwise. Also, I'm pretty sure that the people in Greenland must have hunted them before you guys arrived. They're clearly not Norwegian settlers up there. Ethnically they're not close to Scandinavians at all so they had to survive off of something before you guys came along.. ;)
kier

@Corson one reason ppl dont like whaling in particular ((even non-endangered species)) is because 'theyre so smart.' but pigs are also one of the smartest animals in the world, on a list that includes humans and apes, and theyre eaten by the billions...
im pretty sure human cultures are just making everything up as they go XP
Geldermalsen

@IceSlash He is just scared about the fact that even Noway kills animals.
AReasonableAmerican

@Geldermalsen Finland isn't scared of much, but so far it seems he's scared of Åland, Russia, and Svalbard

@AReasonableAmerican Because they can be as agressive as him.
potatoe4life

You must remember, those holding the spears live on an essentially bad place to have livestock or farm. Norway is mountainous, Iceland, Svalbard, and Greenland are very cold, and the Faroe Islands is rocky(Yes, they have sheep, but those are native to the land.). Finland, Sweden, and Denmark have space to farm and raise livestock.

@Savage0Cabbage thank you. I hate always having to explain it

Woah... Finland is SCARED? Usually it's only Åland who can do that! Nice job Svalbard, you did the impossible. Oh and one more thing, watch out. Finland's probably coming for you right now. He did the same to Åland...
LavaMadness

Finland looks terrified.
Take out your cameras, this is rare.

Most whales... and fish, for that matter... are pale on the underside, to camouflage with the sunlight, and dark on their top halves, to camouflage with the dark depths below, all the better not to be seen by predators (or their prey).
I would imagine an albino whale has a better chance of being killed by something or someone before it has a chance to procreate and pass on it's mutant colouration gene. Natural Selection at work.
BadgeOfBall

You know something is off, not only when Finland backs away from the fight, but also when he pairs up with Denmark and Sweden.
dudemanbro