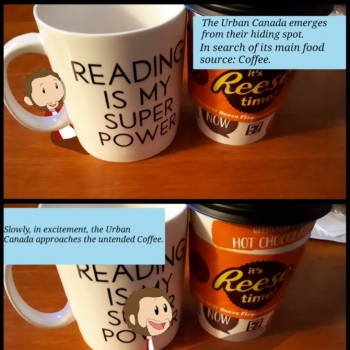 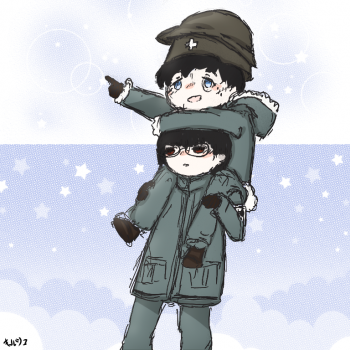 Is this what Finland does all day? Sit in a chair and look pissed off? Is he maybe a philosopher or something and has to think about life?

I think the "Finland is actually one of the smartest" theory would make sense though.

@IsaIna it would make a lot of sense..... Maybe that's why he's so angry? He has realized something the rest haven't?

@TCS261 I believe this theory, it sounds awesome

Since Finnish is reputedly the second toughest language in the world (I've never tried to learn, but given how tough Hungarian is, I definitely believe it, and Hungarian doesn't even have 17 cases), and since the only countries whose languages are even distantly related is Estonia and Hungary, I can see why anyone with a choice would learn Swedish, which is much easier, and more than half of the top ten languages spoken are Indo-European. Granted, I'd choose Finnish (I even tried to when I lived in Sweden, but they turned me down for the classes), but I've been accused of being a masochist, and I definitely like learning things that aren't as widely known. I know I'm different, rationally, it makes more sense to learn Swedish, even if Finnish is cooler.
TheyCallMeMo

I want a comic of Sister Finland and FennoSwede!
Lumberjack

I think there is a certain clarification that needs to be made here. Finns don't hate the swedes or Sweden. That relationship is much the same as with any neighbouring countries. We like taking the piss out of each other and people think of the Finland vs. Sweden hockey games the same way the Germans and Dutch think of their football games. I repeat, Finns don't hate or resent the Swedes.

It is the FennoSwedes (who despite their delusions are not considered Swedish by the actual Swedes or anyone else for that matter) who are resented by SOME people and one only needs to look at the comments on this post to see exactly why.

The FennoSwedes, or as they think of themselves the svenskatalande bättrefolk, are one of if not the most privileged minorities in the world. Yet they act as if they are an under appreciated or even oppressed minority. The Swedish speaking minority has never been oppressed or mistreated and have in fact received privileged treatment. All you have to do is point out the disparity between entrance places in institutes of higher education reserved for Swedish speakers compared to the number of native Swedish speakers and the privilege is quite clear. In some institutes this is actually so bad that for example the Swedish speaking Svenska handelshögskolan is treated as a complete joke by all other universities, because they will admit anyone who speaks Swedish no matter how unintelligent. Seriously, even professors of other business schools make fun of them. But of course this is not a privilege, it is called positive discrimination.

Then there is the not so small matter of mandatory Swedish classes in school. This is actually a much bigger issue than many outside Finland understand. Finnish is already a minuscule language not spoken outside Finland, so in the modern world learning other languages is an absolute necessity and the Swedish speaking minority of 5% of the population require all the rest to learn yet another minuscule language, because they can't be a***d to learn the language spoken by over 90% of the population in the country they are living in. In the case of almost everyone, this is an utter waste of time and a distraction from actually useful languages. Please remember that no-one is saying that Swedish shouldn't be taught at all, just that it shouldn't be mandatory. Additionally, the language most kids are taught isn't even actual Swedish but the bastardized version spoken by the FennoSwedes. So this ridiculous policy which exists for the sole purpose of pumping up the already inflated ego of a minority of the minority FennoSwedes is actually harmful to the education of the majority population.

All the rest of the Finns want is equality of opportunity and the freedom to choose which languages to learn. This doesn't seem like a ridiculous demand, but somehow it is seen as threatening the FennoSwedes, who get away with playing the discrimination card, because they are a minority.

I should also point out that most Finns will not bother their head with the privileged position of the FennoSwedes when they don't have to interact with them, but can get quite annoyed when someone is DEMANDING that they should speak Swedish. Actual swedes are always perfectly happy to converse in English with Finns, or gestures if no common language is found.

So, Finns disliking the Swedish language has actually very little to do with the Swedes.
MikoMae

@Zuperkrunch Honestly, Sweden is even worse given his tendency to dress up as the IT clown and attempt to murder the children.

"I don't understand how and why there are Fenno Swedes though."

Long story short and simplified: Sweden and Finland used to be one country for most of their history. Back then nationalism wasn't invented, so basically Finnish was just a language that some Swedish people spoke (remember this is simplified), but there were also Swedish speaking Swedes living in eastern Sweden (modern day Finland). In 1808 Napoleon convinced Russia, that they should attack Sweden, and that's what they did. Russia was able to occupy half of Sweden. Russia was however afraid that the newly occupied territories would revolt and rejoin Sweden, and felt that they wouldn't do that if they saw themselves as Finnish instead of Swedish. Therefore Russia decided to make the occupied territories into the autonomous Grand Duchy of Finland, and adopted a pro-Finnish nationalism policy towards the Grand Duchy. The formerly Finnish speaking Swedes of the duchy became Finnish speaking Finns, and the Swedish speaking Swedes became Swedish speaking Finns, or FennoSwedes as SatW calls them. When Finland became independent in 1917, still about 20% of the population spoke Swedish as their native language. Nowadays the figure is closer to 5% but Finland is still a bilingual country and Swedish is a mandatory subject in school.

@Cofifield
Good, succinct summary. Pakkoruotsi made sense 100 years ago when 20% spoke Swedish, but now with only 5% speaking it as their mother tongue it does not make sense to force the 95% majority to learn Swedish. Voluntary is okay, but it's time to relook at the situation since it's changed so much in a century.
VivaWorld546

FennoSwede is so cute! Can we see some of Sister Finland spoiling him? Especially right in front of Finland! XD
The_Groke

I'm kinda like Finland to my little brother. He comes to my room without my permission and then i drag him outta here. Heck, why can't he just stay away? He doesn't speak anything else than Finnish. Yet. Soon he will start talkin crappy english.
Add comment: Please Sign in or create an accout to comment.