Some time ago I talked with a German girl about the use of flags in Germany. She told me that the only time it is seen as okay to be waving the German flag is at sport events and official buildings. The rest of the time the fear of feeling national pride is too big. It is in fact so bad that some Germans even feel uncomfortable when they see other countries waving it at hotels and the like.

In Scandinavia we use our flags completely different, but it’s not like in North America where you see flags everywhere as a sign of national pride.
Every time we have a celebration of any kind we raise the flags, because here our flags doesn’t so much symbolise national pride as much as it has become a symbol of happiness, joy and having a good time. And something I haven’t seen in other countries is that we use it when celebrating birthdays. So if you walk by a house here and see 20 small flags in the front yard, it’s not because the people living there are nationalists. It just means someone is celebrating their birthday. 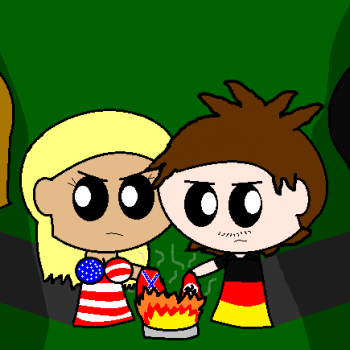 Out of the Darkness

@Koshee did you tried turning him off and on again?

Hmmm... as an USA citizen I feel like we could stand to do with less flag waving right now...
Fagelholk

Strangely enough, I just like putting up the Swedish flag on special days (in Sweden) since it just looks nice; yet i would never ever put up a German flag.

I am from Germany, and the images I associate with the German flag are those of narrow-minded "Laubenpieper", drunken soccer fans and ultraconservative nationalists. Not only in Germany: Just look how the extreme right in other countries like Hungary or Poland makes use of their national flags when they are protesting in hate against mankind. Yes I know very well that the German flag is, in fact, shaped as a very positive symbol, but meanings change.

Yet in Sweden, the approach to the flag feels much more relaxed and unbiased, even though there are (few) occasions where idiots from SD or SU wave it around. It feels just like a nice symbol for celebrations and stuff. Just as satw has written. I like it.

@Fagelholk Please stop being so hostile to people on the far right. If you don't like what they stand for, tell them and listen to their response. Throwing insults and labels leads to nothing good.
blackcat

When I visited Texas, the Texas flag was everywhere as an antidote to the American Flag. Unless it was Federal Building (like post office) Texas Flag always was seen alongside USA flag. Texans are very proud that they were a republic before they were an American state, and for this reason gives them the right to fly their state flag at same height as national flag. Many Texans consider they are Texans first and Americans second. Many of them disown George Bush Sr. as a "faux texan" as his family were from New England (North eastern USA) and he simply bought himself a "toy ranch" and called himself a Texan rancher.

@Danelaw It could be worse. I was in GA, TN, SC, and NC on the fourth of July weekend, and I literally saw more confederate flags than American flags. At least the Texan flag has fewer negative connotations. Not none, it got its independence after illegal immigrants to Mexico decided they couldn't assimilate (yes, I'm laying it on thick to highlight the incredible irony, and I know it was more complicated than that, although what I'm saying is completely defensible), but compared to the Confederate flag, it's relatively benign. Yes, for those that try to white wash history, the Confederacy was from the first primarily about slavery. Of course, there were "states rights" issues, but they mostly centered around, you guessed it, slavery.

Not that everyone that displays it now is racist, wants to return to slavery, or anything else. No, most are just ignorant and angry rebels without a clue. Still, if on American Independence day, you can see more flags from the entity that seceded from the US than from the US itself, there clearly is a significant population down there that wants to no longer be a part of the US. Personally, I say we should let them go. I don't know why we expended so many men and money to keep states that have been millstones around our necks in so many areas...
KRyptic

@pn3105 Yepp, totally correct about the first and third stanza of our national anthem.

Problem was that idiot Hitler -eeeerr, no, cut the idiot, that's an insult to all idiots- used the first stanza plus the Horst-Wessel-song so successfully in combination that nobody remembers the original meaning of the first stanza.

The current national anthem was created during a time when there was no real "Germany" per se, rather there were dozens (or even hundreds, depending on the time during the 19th century) of principalities that were split up into the Germanic states, but not a single nation. Dito for the German flag, but in reversed order top-to-bottom.

It was a unification call, not a call to rule over the world. Yet that <censored, censored, censored> damn f'ing <censored> Hitler totally royally f'ed it up by slathering in that coat of shhh...- -ameful inferiority-complex he must have had.

Luckily that idiot didn't like the black-red-gold tricolor of the Weimar Republic because he believed it was a slander to Germany. Otherwise we would have had to invent a new flag, too, after WWII.

So, be proud of the great things from Germany's history, and abhor the horrible things that happened.
"Never forget; never repeat." But not as a mantra, only as a reminder. ;-)

@KRyptic Exactly. Good write-up. I would add that there were many other symbols, like the swastika (which had ancient, positive religious meanings before WWII), which were corrupted. We should reclaim them, and strip them of their power to harm, and return the good meanings.
kier

this is heartbreaking. ='(
youre a wonderful country, germany! youre not that psycho freak doppelganger Nazi Germany, youre GERMANY!! it used to be the only thing that came to mind when i thought of 'german history' was the whole stupid nazi thing, but then i realized... that unending list of history-making composers, authors, artists, architects, engineers, psychologists, scientists, researchers, even down to my humble middleschool german teacher, they all have a common thread.. my favorite thing about germany is the absolutely fantastic MINDS born and bred there! look at all the different ways germany has made the world a better, more beautiful, more brilliant place! dont let those psychos make anyone forget about any of that!
as far as im concerned, theres THREE versions of each satw country: brother, sister, and doppelganger. everyone knows Doppelganger Germany already, and i feel like the orange flesh blob is close enough to Doppelganger America ((tho thank goodness he seems to have settled down a little, i hear)), and maybe even Doppelganger North Korea is the only North Korea weve met yet. and id love to see the comic introduce EVERYONES evil doppelganger, even just for a single panel ((and hopefully never again)), so people remember never to mix each of them up with their Brothers and Sisters. XPP

i mean i know this is fictional stereotypes, comedy, fantasy... but i hate that this is how some people think of germany, so i just wanted to be real here for a minute, but i do hate being That Guy so ill stfu now lol XD

@kier No please do not stfu make character concepts for the doppelgangers!
Saxo

You can be national without being nationalistic. Being national is something you choose to be and not about any of those things you are born into. A muslim guy I knew once turned up to a christmas part wearing a danish "klaphat", sang christmas carols, drank non-alcoholic beer and just pretended he was a drunken idiot likes the rest of us. Claimed he was "drunk on happiness". No amount of fistbump would have enough...

When World Cup is on: Everything is Black,Red and Gold

After World Cup: No Germany Flag at all
DerJulian

I don't believe, that Germans are still as non-patriotic as many foreign people believe we are. You can of course initially link this with the football world cup in Germany in 2006 that re-established a new community feeling among people of this nation, but I believe this trend originated from the decades between 1949 and today, 2017. During this time, the leaders of this country made so many things possible that were able to redefine it as a peaceful, sovereign and democratic nation able to have found its peace with its neighbours it now can call friends, while also reviving the status of an "Ehrlicher Makler" (honest broker) in the tradition of Bismarck on an economic level. Adenauer's reconciliation with (once its biggest rival) France, Israel (not even 15 years after the Holocaust, think about that!). Brandt's genuflaxion in Warsaw (who opposed any form of nationalsocialism and had to flee to Norway, so didn't bear any guilt, but still fell on his knees, not for him, but for Germany), Kohl's hand holing with Mitterand at a memorial for Verdun (possibly the biggest catastrophe in the history of german-french relations, when it comes to body count to begin with; Nowadays, no young German could possibly imagine how it would be if France was our rival or enemy, because it seems so surreal) etc. etc.

All these happenings make Germany of the present truely a country its citizens can be proud of. It learned from history, raised itself from the ashes and found its respected place between fellow democratic and prosper nations. In 1945, Europe was torn apart by war, hatred and hopelessness. Today, according to the BBC poll the world loves us. And the Germans love the world instead of hating all its pieces not fitting into a dehumanising "aryan" cult. Germans found their piece.

Well, that's the history part of course (I hope it doesn't sound too melodramatically), but I also want to mention one point: Germans are often seen as non-patriotic, because they're compared to US-Americans and Canadians, who often define patriotism as flying the flag, singing the national anthem (every morning at school, I heard) and to sum it up as a very "visual" connection to their nation (you know, stars and stripes or maple leaf all the way!). Even viewed seperated from the past, Germans intend to not be too emotional (I would say, British "understatement" is a very popular model in the federal republic), which is why the stereotypical German is seen as cold and emotionless (however, I must say that I believe that this also applies to other nations, like the UK, Scandinavia, if not the whole of northern Europe, I'd say.)

But in my opinion Germans are quite patriotic, they just do it in a different way. Intense and over-the-top flag waving and anthem singing may not be seen too often in Germany (still, I believe that every day we find a more and more relaxed and balanced relationship to our symbols), however deep in their minds many Germans do believe that we make the best beer, the best cars, the best export goods in general, that be have the best economy, that we are the most hard-working, punctual, clean and reliable people out there and so on and so forth

That's just a small contribution from my point of view on this topic. To be honest (and short): It gets better. We found a way between self-hatred and chauvinism, because in the last 72 years so many things changed that made one point quite clear: Who doesn't learn from the past nor realise the present, won't have any future.
Add comment: Please Sign in or create an accout to comment.