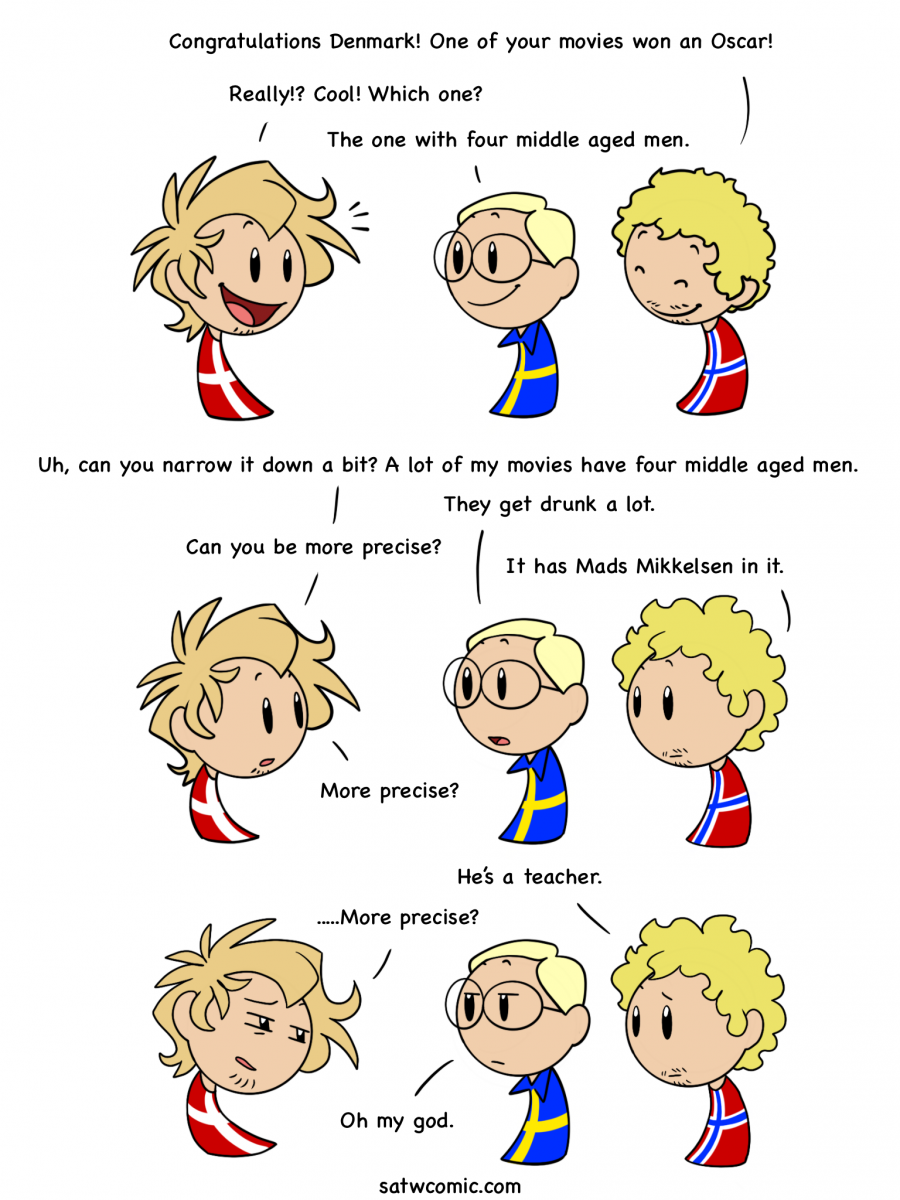 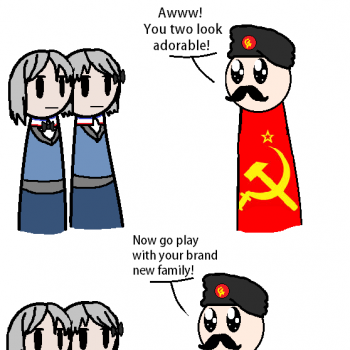 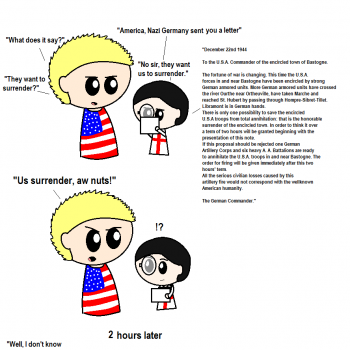 As Meme from Batman Beyond said it:
Do you have the slightest idea how little that narrows it down?
daddio

But now I am waiting for this year's Eurovision post...

@daddio they are always a highlight
june_s

@daddio Same! I wonder if there will be a reference to Efentix
ABCEastPonymon

@daddio Same! I came the moment I remembered it existed... it's over already and I didn't get a notice

SWEDEN: Nevermind.
NORWAY: I've got an idea. Let's watch one of Finland's movies!
SWEDEN: Oh God, no...
NORWAY: No, no, not one of those he made with your sister.
SWEDEN: Pheeew, good. I saw this one set during the Winter War where she travelled to Finland as a... volunteer.
NORWAY: Oh. What was the title?
SWEDEN: "Finlands kuk är min."
NORWAY: Oh, bloody hell...

SWEDEN: Hey, Finland! I liked that movie you made!
FINLAND: ............
DENMARK: You know, the one with just fourteen lines of dialogue!
FINLAND: ?
SWEDEN: The one which was set... I dunno, it was the countryside or a city. It was full of trees, anyway, and looked like a shithole.
FINLAND: ..........Could you be more specific?
NORWAY: Uh, the women were all angry and standoffish, and all the men were drunk.
FINLAND: Could you narrow it down a little?
SWEDEN: Uh... It looked cheap. The budget must've been tiny.
FINLAND:..........
NORWAY: The men were all fat and ugly, and the women looked like corpses.
FINLAND: Um...
SWEDEN: Jesus Christ, Finland...
NORWAY: Yeah, I thought Denmark was bad...

@DarkMage7280
To be fair Aki Kaurismäki has made some good ones - and I am not talking about the Leningrad Cowboys films hemade.
I have especially enjoyed Take care of the Scarf, Tatiana (Pidä huivista kiinni, Tatjana) and The Man without a Past (Mies vailla menneisyyttä)
ImportViking

Maybe it was intended as a career award for the whole Danish film industry and they chose the most generic one to express it?
Reidun

cant wait to see ESC this year though
AmericanButterfly

The movie is called "Another Round"

edit The original Danish title is Druk, which is also the Danish word for "binge drinking".

@AmericanButterfly
That's the international title. The original Danish title is Druk, which is also the Danish word for "binge drinking".

@EricTheRedAndWhite oh ok thanks for giving me the original title

@AmericanButterfly
You're welcome. But either way, both titles are related to drinking.

@EricTheRedAndWhite
I like the original better. They should have stuck with it.

@AmericanButterfly Oh, so that's why this Danish movie about four men drinking won. It's titled so that it's directly referring to the drinking. English version is just slightly more subtle.

Didn't see that one but somehow, it brings one Finnish movie titled Napapiirin sankarit to mind. In that movie, getting a digibox is really hard for these men...
Carewolf

@AmericanButterfly Druk just means drinking, as in drinking alcohol. It doesn't have to be binge, though it does generally refer to a heavy or regular drinking.

@AmericanButterfly
@Carewolf
Well, my understanding of the word "druk" has always been that it refers to heavy drinking specifically.
SchrodySweden

Never understood why people watch the Oscars. It's rigged to the point that the winners were only the best at gaming the system. Many movies are made to win Oscars, not be better entertainment. It's why you are often left amazed that something won.

Not to say the mentioned movie didn't deserve it, just that the Oscars isn't worth paying attention to. It's all a marketing gimmick now.

Edit: Looked it up: Thomas Vinterberg's 'Another Round' or 'Druk'
This comic got me curious, now I have to watch it.

@Steeeve IDK, I liked the year were the movie "Parasite" won and many people lost their shit an anger because "Joker is a commentary on society!!!!"...So was Parasite, and that one was actually realistic and something I would expect to hear on the news.
That was a fun year to at least look at the drama it caused.

The Oscar is indeed just a joke. For example, I remember how praised The wolf on Wallstreet was, because it won an Oscar, to the point I gave it a shot. I could not finish it. I found it plain awful and will never understand why it won a prize. Same goes for so many other movies. The Oscar, or most of these big events were they only invite/ nominate millionaires, its really just a celebrity jerking fest and make stupid fans think these people are some sort of demi Gods.

Moral of the story? Don't be a hipster that would rather die than watch something lots of people talk about. But also have low expectations for everything, as popular does not really equal good either. It can just be better marketing.

@Lostdaydreams
I kinda liked The Wolf on Wallstreet, but it was too long and I got bored by the end. It's too long by at least 15 minutes and really needs to be cut down.

@Lora This is just my personal opinion of course and I fully understand and respect if you don't share it, but I didn't really see any true plot ^^; . I understood were it was going, pretty much showing us down the rabbit hole of people that get rich fast and don't have the emotional maturity to still stay down to earth, and how their lives turned into a vanity show.
But the execution was very slow, too many shock value scenes instead of actual important to the plot ones(Did we really need those 10 minutes of being tolled the meaning of prostitutes prices?), and the dialog was just not doing it for me.
Then again, I gave up half way into the movie! Maybe it gets better in the second half? I will assume they did try to give it some moral by the end.

@Lostdaydreams
Oh, it's not surprising in its plot and it's definitely too long. It's basically a movie about getting rich and corrupted in the process to the point where you'll sacrifice family and friends. And no, it didn't really have a moral by the end except that when you're rich you get off light (in special prison for rich people) and then get money by teaching other people your sales techniques when you get out.

If you didn't like the first half at all then don't bother with the rest. The second half is where I felt it really downhill. XD (Well, last quarter probably. Only seen it once and have no desire to see it again).
DarkMage7280

@Steeeve I just watch Oscars if Kate Winslet is one of the nominees. <3
Louhikaarme

@Steeeve It has probably been 15 years since I last time watched them. Maybe I'm entirely wrong, but I feel like Oscars have been losing their significance among real movie aficionados, maybe even the professionals themselves.
Lavenderflower

@Lavenderflower Wait - is there some other kind of Lars von Trier?

I'm going to be watching Når Dyrene Drømmer (When Animals Dream) this weekend. Pretty sure it's about a girl who becomes a werewolf, but I'll be watching for drunken middle aged men, haha.
Add comment: Please Sign in or create an accout to comment.