Do they even have any real complaints!?! 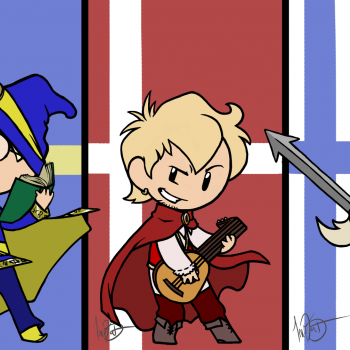 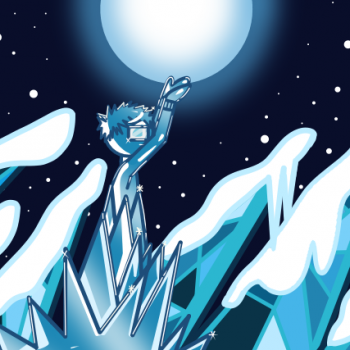 @DarkMage7280 I was about to assume sweat, but your explanation is better.
potatoe4life

@DarkMage7280 actually i think he IS crying. why? BECAUSE HIS DAMN ROOM MATE DIDN'T CLEAN THE DAMN SAUNA AFTER HE FUCKING USED IT! >8U

I rest my case

@potatoe4life It's impossible.
Years of sauna have shrivelled up Finland's tear ducts.

Today all the traffic lights weren't red for long enough to take my water bottle and drink from it. Can you believe that? :P

@Zeust
My phone dinged with a new message while I was driving home today, and I had to wait SEVERAL LONG MINUTES to sate my curiosity as to what the message was.
ImportViking

@Zeust According to my experience Dutch cyclists tend to ignore traffic lights when possible, so what's exactly special about today? Just get an e-bike or a Sparta Met if you get too tired from the real thing. ;)
HelsinkiAngels

Hello fellow commenters! This is an absolutely brilliant comic, with a lot of funny and original thought put into it. It's fantastic to see the boys reacting to all these silly situations, which is why it pains me to have to say this to others here:

Please, for the love of all that is holy, stop with the, "AKSHULLY, lava is dangerous/the lava problem don't real/real problems exist/this is not based on anything real/my reals" comments.

We know. Everybody knows. Humon knows. That is the entire point of the comic. thatsthejoke.jpg

Some of your facts are actually very fascinating, so thank you for sharing them with us, but perhaps just try to keep it to the facts, and not the attitude of, "I know better than this and am darn well going to make sure I share it to show you how much better I am". It's the best kind of irony, that a comic entitled "Whiners" has people dropping complaints about its quality.

Let me assure you, the quality of the comic is fine. It's beyond fine. It is, in fact, the audience that might need some adjustment.

@HelsinkiAngels You ARE aware that todays comic is about `whiners`, aren't you?
:-)
Chaana

Finland should have said "Someone sat next to me in a bus". A real Finnish nightmare
paxman356

All of our people are too lazy and uninformed to pick a good president. We win.

@paxman356 Not like we had good options this time around.

@o98 I was trying to upvote this but accidentally downvoted it. Sorry.

@lbisno1 Can't you upvote it now?

@o98 Bernie was certainly better than the two we ended up with. But the deck was stacked against him from day one -- the DNC machine was in it for Hillary.

In addition, there were some serious issues with the Sanders platform. His policies would have dramatically increased the national debt -- the assumptions made in his manifesto were based on a ridiculous annual 5% GDP growth, which is something the US hasn't seen since the 1960s -- and he wanted to tackle climate change but was opposed to using nuclear power, which at the moment is the only low-carbon method to generate industrial-scale baseload power.

I still would have voted for him had I been given the chance. (NB: I tried to vote by mail-in ballot and my ballot never came, even after multiple requests from my municipality).

@txag70 no debt, he asked you to tax the rich fucking blooksuckers that you refuse to acknowledge

@o98 .... I looked in depth at the Sanders platform (I do like the guy and much of what he had to say). His taxes on the wealthy would not be enough to balance out the drastic increases in spending. Take trying to expand social security. Social Security already has a massive unfunded liabilities problem because it was never designed to help people for more than a few years. As FDR intended it, it was designed so that those who outlived what they saved for retirement did not have to return to the workforce at an advanced age. However, life expectancy has risen from 61 to almost 80 from 1935 to today, while the Social Security age has only risen from 62 to 66. To propose to expand Social Security is fiscally irresponsible, especially when that money could go to areas that need it (infrastructure being a big one). You could tax the rich at 90-95% and that unfortunately still would not be able to support the massive spending increases that Sanders wanted.

If you seriously think I don't have a major issue with the idle rich, you must not read many of the comments I post here. But in case you haven't, my ideal position would be to lower income taxes and replace them with high estate taxes and high capital gains taxes. As far as I am concerned, you work for income, so we shouldn't penalize that. But you don't work for inheritance or dividends, so we ought to tax that higher. Income inequality isn't great, but wealth inequality and subsequent lack of class mobility is the real death sentence for the US. A high estate tax solves this, because the idle wealthy will spend their money (hopefully in the form of charitable donations) rather than give it to Uncle Sam before they die. This would in turn, combined with stronger labor unions and reduction of H-1B's/immigration, stimulate the US economy and result in higher wages for all, which would result in less dependence on government for assistance, which creates further budget surpluses.

@txag70 And taxing the rich is easier said than done. If there is something they are good at it's dodging taxes by both legal and illegal means.

@Rogers Right... which would make a policy platform like Sanders' even less sustainable. I liked a LOT of what he had to say, don't get me wrong.

But his proposals would have created massive deficits, and I fear our national debt will lead to MAJOR economic problems within our lifetime. Also his opposition to nuclear power makes his rhetoric about climate change practically worthless. Unfortunately, wind, hydro, and solar cannot generate enough baseload power to run the USA's industrial base off of.

Still... he was probably the 2nd most "honest" candidate in this election (Jim Webb being the first)

@txag70 Perhaps if you didn't spend so much on the military you could afford a lot of nice things, like for example both renewable AND nuclear energy. It's frustrating that many seem to think that we can't have both.

@Rogers While our military spending is GROSSLY high at about $600B a year, it is still dwarfed by our unsustainable Social Security system, along with medicare and medicaid. You could cut the military budget by 50% (which would really, really be a bad idea.. there is certainly room to cut but anything past about a 25% cut would likely mean cuts to the paychecks of our already underpaid soldiers or for the healthcare we provide them after fighting for us) and it still wouldn't solve the deficit. By all means we need to draw down our presence overseas, but cutting the military alone doesn't really fix the underlying budget issues for America.

Furthermore, if you really want the US to cut back on military spending, Europeans are going to need to pull their weight for defense and fulfill their NATO obligations. If I recall correctly, it's basically only Poland and the Baltic states that meet their NATO obligations. I hate Trump but he was right to call out Europe as a whole for being laggardly with regards to defense, especially in light of a more aggressive Russia and the threat of radical Islamic terrorism.

Renewable energy is rapidly reaching cost parity with fossil fuels. The issue with renewables is that they cannot generate sufficient baseload power. Only fossil fuels, hydro, and nuclear can, and this will likely remain the case for at least another 30-40 years. But fossil fuels cause massive environmental damage, and we've basically dammed up every river that we can for hydro. Furthermore, renewables don't have to deal with extremely tight regulation for things like research that nuclear does (for good reason, but still), which means private firms can perform renewables R&D. Without major help from the government, private nuclear R&D wouldn't really exist since the government has to allocate and approve usage of nuclear material and since the initial capital cost of nuclear power is very high.

If we are to deal with climate change in the appropriate manner (that is, REALLY FUCKING FAST), it'll likely mean many new nuclear reactors to replace coal and natural gas. Think about it this way. The Diablo Canyon nuclear power plant in California is set to go offline by 2025. The government of California, as well as PG&E, claim it will be carbon-neutral. They are lying, based on the fact that California still hasn't replaced the carbon-free electricity lost from the closure of the San Onofre plant in 2012. When they shut down Diablo Canyon, it will be about as big a loss of carbon-free energy as if they lost all the renewables installed in California since 2005. One nuclear power plant produces more electricity than kilometers upon kilometers of solar panels and/or wind turbines, and it can do it day or night, rain or shine. Renewables are excellent for small applications (think solar panels on homes and offices) but industries and cities need more electrical power than that.
Chuuken

@txag70 We has Sanders and on the other side we had Kasich. Can you imagine an alternate reality where 2016 wasn't a jack-ass reality show of an election, but a professional, respectable debate? Opportunity lost.

We also had Pataki, but the media deliberately ignored him because he was the least awful Republican. It was pretty blatant that the media was intentionally trying to sabotage the Republicans by only covering the orangutan so that come the election, the Republican nominee would be constantly attacked with "hey your party is the party with the orangutan in it". But since the orangutan was the ONLY Republican getting any coverage, they nominated it...

'@Chuuken' Sanders would be a fast track to a new recession, Republicans had no candidate that wouldn't be targeted as racist sexist homophobic bigot. Trump's election serves best to highlight the extent of political polarization and corruption of media, academia and government.
txag70

@Chuuken I agree. That would have been pretty good. But to think that with the DNC machine behind Clinton and the media, perhaps unwittingly, behind Trump (look at the amount of time he got vs all other candidates), we were not afforded that option.
boom90

@paxman356 you think your people were too lazy and uninformed to pick a good president? We had it worse in the Philippines!
Keoaratr

I once heard a Brit say: "How have you been able to hide the fact that both your weather and your food are worse than in England?"
hejsanhoppsan

You shouldn't joke about first world problems though. One time a stranger sat down next to my brother in a bus and tried to start a conversation with him. After that, he had to see a therapist for two years.
UnPokemon

As expected, Iceland is taking "The floor is lava" to the next level.

@UnPokemon We can never be as cool as Iceland. Sad but true.

@Rogers It's a sad fact all nordics learn at a young age...

Estonia: There's no wifi in this forest!

@Wiruman "...but I assure you'll find a better connection."
comrade_Comrade

'@Wiruman' upgrade to WiMAX, one station will cover the whole country :)
ImportViking

@Wiruman
"Imagine if trees gave wifi signal, we'd be planting so many trees and probably save the planet, too. Too bad they only give us the oxygen we breathe" - Anonymous quote on the internet.

By the way, for what I know, Estonia was the first and still is the only country in the world where internet access is a fundamental human right.
AttundaDisa