The April Fools' joke about the Swiss spaghetti tress was first made by BBC in England in 1957. Afterwards they got calls from people asking for advise on how to grow such a tree.

It was later "borrowed" by Danish news. Afterwards they started getting calls from annoyed wives who knew spaghetti was made from flour because it said so on the packaging, but their husbands wouldn't believe them because why would the news lie?

Denmark was freed by the west at the end of WW2, but they forgot the small island Bornholm, which Russia then kicked the Nazis off. The Danes were very grateful at first, until they realized the Russians took their sweet time leaving, and people started worrying that they had taken Bornholm. But finally after a long while they left and everybody made a sigh of relief.
But still to this day you can still see Communist monuments on the island that stands out from the rest of the art on Bornholm. 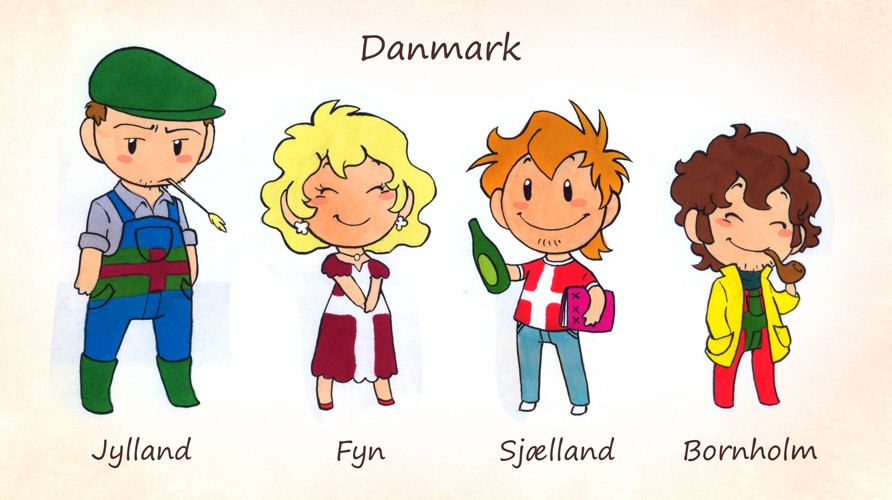 Out in the big world he's known as Denmark, but back at home he's known as Sjælland (Sealand/Zealand, but has nothing to do with New Zealand). He's the head of the household (has the goverment), and the wildest of the four. He's open minded (not much to people with dark skin though, but still more than the others), promiscuous, and self important. Has a tendency to look down at the others and doesn't like Jylland much, whom he consider slow and boring.

Jylland (Jutland) in turn doesn't like Sjælland either, and often calls him a Swede or Devil Island. He's a hard worker who doesn't say much and enjoys nature far more than Sjælland. He is very practical and has very few things that are just meant to be pretty. He loves porcelain figurines though.
He has a love/hate relationship with Germany as well because he lost a lot of land to Germany, but at the same time often visits him for a drink.

Fyn (Funen) is often caught in the middle of Jylland and Sjælland's fights, though she prefer Jylland. She's very sweet and nice, but is often mocked by the others for being unimportant and kinda geeky. Other times they just forget her completely.

Bornholm lives by himself on the other side of Sweden. He may be the smallest, but he is considered the best looking, and though Sjælland sometimes calls him a "backup Swede" he also absolutely adores him and has lovingly named Bornholm "Pearl of the Baltic Sea". Bornholm is a tough little guy who has fought off both Sweden and Russia, and it's a big part of his identity that he chose to be Danish, unlike Iceland, Faroe Islands and Greenland.

These are just the main four. There's also Lolland and Jylland could be three characters.

I know people will now ask me to draw the different regions of their country, but I suggest you do it yourself, as you probably know the regions and the stereotypes better than I ever will.

The Love Story of Bornholm

Aw, poor Norway. Nobody ever tells him what is going on.

Bornholm, the only on of Denmark’s far away islands that actually likes Denmark and consider themselves to be Danes (Though not quite the same kind of Danes as the rest of us).

Scania is the very south of Sweden, and even though it belongs to Sweden now, a lot of people feel that it’s still part of Denmark, and the rest of Sweden think that they’re pretty weird.

The story behind this comic is that Sweden once defeated Denmark, and the Danish king had to give up most of Denmark and parts of Norway (which was under Denmark at the time) so as not to loose the entire kingdom.
But the Swedish king was a bit of a bully at the time, and Bornholm quickly grew tired of being part of Sweden, so they killed as many Swedes as they could get their hands on, until the rest finally left.
Then they went back to Denmark and told the king that they would be part of his kingdom again if he promised to never give them away like that again. They just liked Denmark that much.