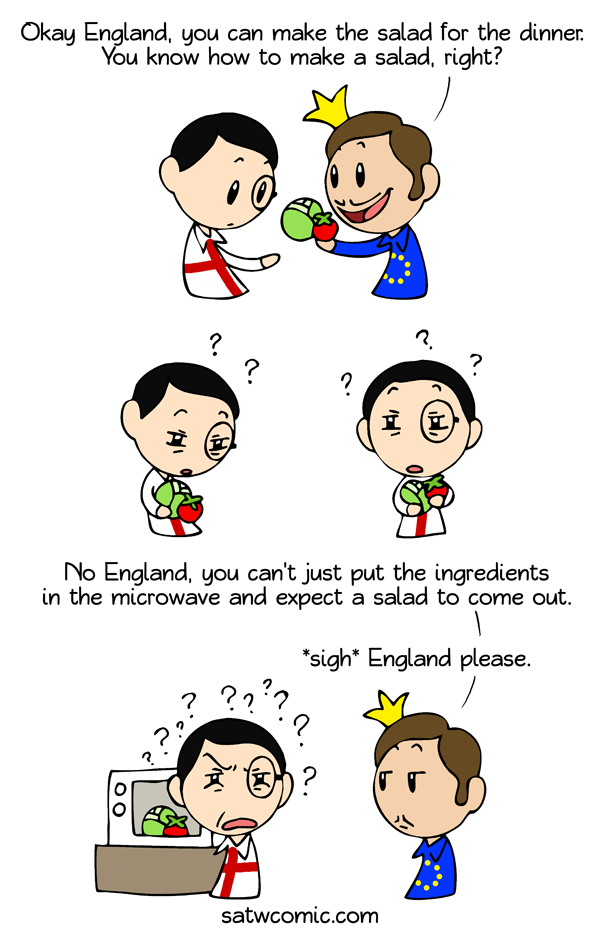 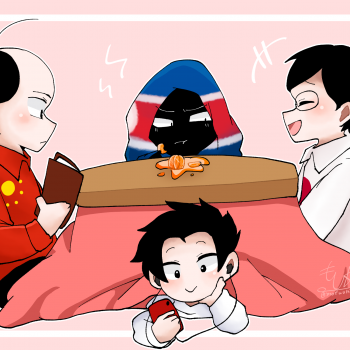 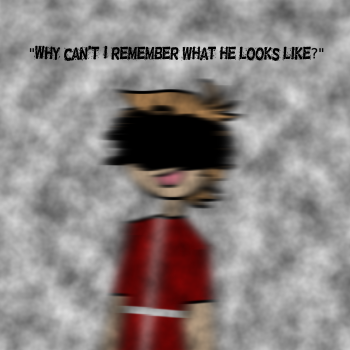 I'm convinced the reason the British conquered half the world was desperation. They wanted to get away from British cooking, that simple, bland-and-boiled, under-flavored cuisine and find something better.

It's as good an explanation as any.

@Anuran That would actually explain a lot of things.
ShoggothOnTheRoof

@Anuran British cooking is "throw some things into a pot and boil them until they're the same colour," isn't it?

You do realise we now have to kill you since your now aware of the secret of our culinary success. ;)

@stevep59 Too late. I already put it on the internet so killing me changes nothing! ;)

@stevep59 The British have discovered cooking things by wrapping them in foil now? We're doooomed!

Resistance is futile. You will be assimilated to our superior cuisine. ;)

@stevep59 What, are you chefs or the Borg?

Sorry don't know what you mean??

I'm old enough for the original Star Trek, Kirk and all to have been a key part of my childhood viewing if your referring to the show but otherwise mark me as confused.

Can you say which comic and message your referring to please as I always find it a pain trying to locate what people are replying to unless its fairly clear from the context.

Ah - on posting it showed the comic you were referring to and after a search I found the post. Understand now but gods that was a year ago. As I say a ST fan so that probably answers your question?
Californian123

@stevep59
Are you sure success is the right word?

Gods that's digging back a while. Not sure which comment your replying to - the big problem with this site is, unless I'm missing something you have to plough through the entire section to locate what your said.

Think I made a couple of tongue in cheek comments plus possible a more factual one about the earlier depth of British cuisine but too long ago to know for sure.
Anuran

@Anuran I was actually taught this in school - we went to India because we wanted to spice up our boring old mutton and turnips.
Lildawg32301

@Anuran And then we add chips* to whatever country's cuisine we just invaded:
Chicken Tikka Marsala (often with chips*) is our most popular dish

@314pies That should be Tikka Masala, marsala is the wine that's used in... tiramisu, I think? Not that I can imagine Tikka Marsala being bad.

I can hear Gordon Ramsay screaming and swearing on top of his lungs from the plane on his way back to the UK to put England to shame.

That facial expression fits the British so well though.

@ImportViking And Mexico will pay for it.

@Rogers Absolutely! It will be the best payment ever!
Zuperkrunch

@ImportViking You have pizza mixed up with Ketchup; Nixon administration.

they actually discussed if pizza is a vegetable or not.

@ImportViking : In California it just might be! I've seen them making the "crust" out of cauliflower, & beside tomato sauce, putting all sorts of cut-up vegi stuff on it, so maybe it could be called a salad? Just not within hearing of Brother Italy, though!

@Newnetherlander Ecological gluten free vegan pizza or so? Doesn't sound very appetizing to me. I'd rather have a real vegetable like a pizza. It has tomato sauce on it, that should do the trick.

Anyway, after Congress debated when a pizza becomes a vegetable (clue: it should have sufficient tomato sauce to qualify as such), it became a meme on the internet. That was also what I referred to a bit.
Topazgirl9


It’s my life in one image

I can cook absolutely anything.

...as long as there are instructions on the box.

@Daru
What is in the box?

@Daru
Soup in a box?

@JTTWloverchinese
You can't imagine what the food industry dares to produce.
I once saw tinned hamburger... Yes, hamburger in a can ! Yuk...

@Daru
Instant smashed potato is Ok, but THAT?!
By the way, want to chat?

@JTTWloverchinese
I'm not really into chatting, I'm afraid. I do appreciate the positive exchanges on the site, however.
Dena

@Daru How about a whole roast chicken in a can?

@Daru NO SOUP FOR YOU!

@ImportViking
Why no soup for me ? I don't deserve that. (just kidding).

@Daru It was just a Seinfeld reference.

@ImportViking
Thanks for the explanation.
I have never watched Seinfeld.
I've been a Big Bang Theory addict for a very long time.
Maybe I should try and look at Seinfeld ? Have you got any good arguments ?

@Daru I don't have any arguments: taste is very personal. You can watch and see if you like it. But the 'no soup for you!' was also a meme on the internet so I hoped that you'd get it. Anyway, just google the phrase and be amazed.
paxman356

@JTTWloverchinese Are you Brad Pitt? ;)

Step 1: Throw away box and contents
Step 2: Throw the rest of your money away and eat out again.

Am I the only American that brings his lunch to work?

@paxman356
You're "tickling" my curiosity.
Would you mind sharing with us what you put in your lunch box ?

When I can't/won't eat in the canteen, I take something I prepard and "deep-froze" such as salmon with various little vegetables on white wine or the very typical Belgian rabbit à la bière, chicken in white wine and tomato sauce, or lentil soup with slices of a little smoked sausage...

@Daru Fwiw I just usually make a big pot of soup on sundays, pour it into several small containers, and freeze it. I let it thaw at my desk during the mornings and then microwave it at lunch time.

It's cheap, at least.

@txag70
Exactly what we do here. But not only soup, sometimes it's with "the left-overs" of a meal.
It's not only cheaper but we noticed that we put far less salt than ready-made meals and that's not bad for one's health. No added sugar too. Cheaper, healthier and most of the time sastier.
I see you're a young American male, so there are still people who appreciate good food over the pond.
What types of soup do you prepare ?

I take a butternut squash and chop it up, throw in some lima beans and maybe half a chopped onion, a little butter, some milk, some water, maybe some odds and ends spices wise (salt, black pepper, garlic, red pepper, mustard seeds if I got 'em), bring to a rolling boil and let simmer for an hour or two. You can do this one with just about any gourd, but butternut squashes I like because the flesh dissolves well and lends a very rich, creamy texture to the soup (and because it's cheap).

Another one I do is a big can of tomato juice with more or less whatever vegetable I have on hand. This one I spike with a LOT of Louisiana hot sauce usually.

Since I am Catholic, it's nice to have these on hand since fish isn't exactly cheap where I live. There are other soups I make, but these are my main two since they are simple and get better with simmering. Turning leftovers into soups is a European thing -- but that makes sense. My very German grandmother emigrated to the US in 1947. She taught my mother how to cook in the style of the Old World, and my mother did the same for me.

Another one I do is "poor man's meal". Diced potatoes, chopped onions, chopped hot dogs, and scrambled eggs. It's an American meal that came out of the Great Depression, and the nice thing is that I can season it really any way I choose and it'll taste good. Is it healthy? No. But will it keep you filled for far less money than just about anything else? Oh yeah.
VivaWorld546

That's what you fucking get when you let Gordon fucking Ramsay scare people out of their fucking kitchen.
HotCocoa