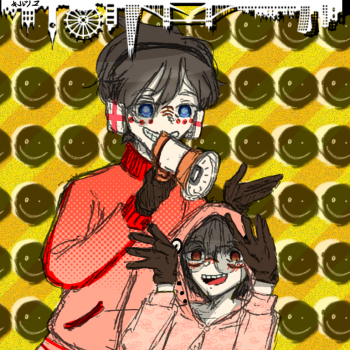 Matryoshka To the Beat 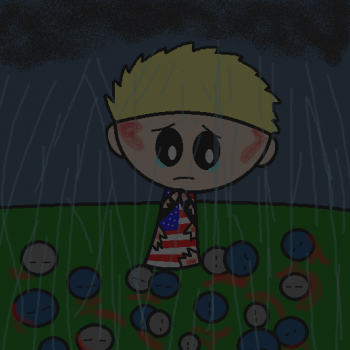 @humon this comic is totally, completely wrong. Both Canada and USA are just Mexico's fancy sombrero!

I don't really see us as either of those things XD. I think of it as more of a house with multiple floors. America is like that guy downstairs who shoots at pests with his shotgun.
potatoe4life

@potatoe4life Yes but America has more population, so if it actually worked that way, America would be too heavy and fall to the bottom.
GamerLogic

What's funny with this joke is that if Canada's the hat and Mexico makes the beard, they've essentially made Abe Lincoln!
Mr_MK

And Amerika and Canada are Mexico's sombrero

Well, if you consider Alaska, which is really on top, it makes Canada into a cute little sandwich.

Canada is bigger and on top. US should be our bitch but we say sorry too much

@amypisces Well, the US has more guns, trade, and influence than Canada, sadly. There's more to being a superpower than just size.
NetherlandsFan

@amypisces it's kinda sad. but Canada has one highway from west to east, making it sadly vulnerable. sorry for americans (i'm going to be crussified in the sky) but i think the US loses completely to the great, amazing, grandious red and white north. Canada rules. the US is just a place i don't like. please americans, tell me why MURIKA is worth it. Canada is fucking awesome. i don't get the US.

@NetherlandsFan We have all these great values, like freedom and justice, but they are based on some very immoral foundations. In the original colonies, there was an idea of 'freedom of religion', which attracted many immigrants from Europe, who soon found out that it was, instead, 'freedom of MY religion'. The colonizers went in the first place because they didn't like religious persecution, but then they put religious restrictions into place as well, with the exception of Rhode Island. Then there was the whole slave trade from Africa. In America, we would like to think of George Washington as this great symbol of freedom, but he was a slave owner, as was Thomas Jefferson, the one who wrote 'all men are created equal'. Well obviously he didn't really believe that, or he wouldn't have owned slaves! Then came Abraham Lincoln, who reunified the North and the South and abolished slavery, but there's not really anything good to say about the time period he came from. And even though slavery was abolished, the discrimination continued. This was partly based on the fact that slaves that had just been freed had not gotten an education yet, so they were portrayed as unintelligent. But even when African-Americans had the right to vote, they had to pass a literacy test before they could actually vote, which many of them couldn't pass. And this was just the African Americans. Before the Civil War started, we had Andrew Jackson, who drove out the Native Americans from their territory just so that we could continue expanding west. On the Trail of Tears, two people died every mile. Then there was the early twentieth century, when immigration from Italy and Eastern Europe into America was at its highest. They weren’t considered to be white by the Americans there, and consequently, they weren’t given the same rights that other people had. People say, “Oh, we have this great democracy, where all men are created equal, and we have freedom and equality, and all this.” But then they act all hypocritical like this, and it continues, right up until now, when we elected Donald Trump as president. He’s going to get us in a war if he doesn’t stop, making direct threats to Kim Jong Un like he does.
No wonder people want to move to Canada.

@Ziebenhaub_the_Texan I agree. The thing is that the "American View" is in a the Golden one's Sweden.(https://www.youtube.com/channel/UCN0-RRaxMgh86eOwndAklxw edit: He's a fascist don't watch his videos) People seen to not realize that Sweden was never a macho man superpower, and the average american is not a god. Not that "all swedes are gay" and "americans are stupid" is an argument, swedes can be manly, it was a european power, and americans can be great, and the values of many are great. The thing is that your world view can't be based on "my country is great, the problem comes from something else".You are eliminating your pitfalls so that you can say "everything I AM DOING is great" and say "it's the ------ Fault!" so that you create a fictional USA, or Sweden, or Denmark, or Turkmenistan in wich everyone agrees with you, and call it The Good Times, but really, they are the """""""""""Good Times""""""""""""". Everyone has faults. I live in brazil. If you are as white as a lebanese, people think you're white. The reason the US can be how it is natural, the job of the president is NOT make the US great again(whatever that means), it's making people confortable in a world that will drag then down, and maintain the promise of who came before you.
your comments are great. remember: In the recent Earth metagame there's buffs for Canada.
SchrodySweden

@Ziebenhaub_the_Texan in most places the literary test was rigged
Hinoron

@NetherlandsFan
We have LOTS of highways!
It's unusual that we have one that runs continuously almost from coast to coast, which is a huge linear distance. It's not like that's our ONLY big road, however! LOL

@Hinoron sorry. i'm just trying to say that the U.S. can completely disconnect the two parts of the country, without much effort. i know your infrastructure is awesome, because you know how to spend money in things. DIFFERENT FROM A CERTAIN COUNTRY I LIVE IN.
sorry. it's brazilian to hate brazil this much.
Maris

@NetherlandsFan
Some hypothetical war with canada would be over before it started. Like you said, few highways, fragile infrastructure. Then bases all along the border and Alaska too. The US did a lot of fighting in the desert, but there's cold weather tanks too as well as mountaineer divisions. And of course the B-2.
Maris

Sorry Canada. You are our hat. There is nothing you can do about it.

@MapleLeavesAreHats remember 1812 when we burned the white house down, there is a song https://www.youtube.com/watch?v=o7jlFZhprU4
KoiFishu

I really love Canada. Both in the comics and irl. I'm not even talking stereotype wise. It's just a great country with a bunch of great people living in it. would love to see more CanadaxUSA