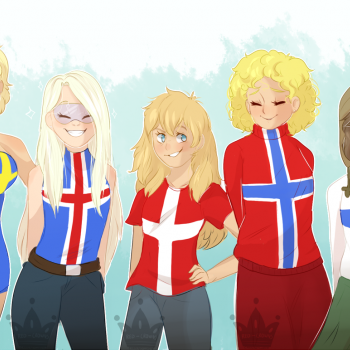 Pretty ladies all around!
1250 Comments:

What is Finland doing here? We have our own gods you know! Praise the Ukko, Heathens!
Ziebenhaub_the_Texan

I actually enjoyed the "Thor" movies and " The Avengers" but Thor the comic book hero is not a norse god. ^^

@ben3b Of course not, it is an Hollywood interpretation through superhero glasses.

@ben3b The Avengers was a good movie, yes. But Marvel's Thor is probably the goofiest depiction of him (Sif was also not dark-haired, Loki was not adopted but rather immigrated with his wife and I have no idea why there were spaceships in Asgard). He's more like He-Man or something. But Americans don't understand anything, so I guess it's okay.
CrazyFox8

I thought Sweden was supposed to be Gandalf

@CrazyFox8 Gandalf is kinda based on Odin so you're not too far off. There are plenty of references to norse mythology throughout the LotR and Hobbit movies. Gandalf is also the name of a dwarf(I think it was) mentioned in the Edda

@KungenAvSverige
Poetic or Prose?
I've only read the Poetic Edda.

@Animaiden
Poetic, actually. To be precise, it's one of the names in the Dvergatal (Catalogue of Dwarves) in the Völuspá.

The names of the rest of Thorin's company is also from there.
PyrrhaIphis

My eye first read that last line as "why are you all dressed as Hobbits?"
Dan

Hey, us Americans with a shred of literacy are just as disgusted every time Marvel Thor spouts mangled Elizabethan English.

The Scandinavians look like they are about to start a very intense game of DnD.

Is there an English translation of the comic Valhalla?

@apocolypse1011 There is, actually. I have no links considering I found them in a British library, but yeah. I can confirm that there is.

@Varkrow Do you happen to know (or could you find out) who published that English-language edition you're referring to? I've searched high and low, but I can't find an English translation *anywhere* (except on shady comics-sharing websites that I don't dare even visit). "Valhalla" looks absolutely gorgeous and I'd really, REALLY appreciate it if you could give me a lead on where I could snag a copy for myself.
potatoe4life

tbh i get REALLY annoyed by Disney's Hercules movie, and Marvel's Thor movies, not because they're bad, nor am i saying they are, but because now so many people think THAT'S how they go/went. I'll stop my ranting though right now before it gets outta control.