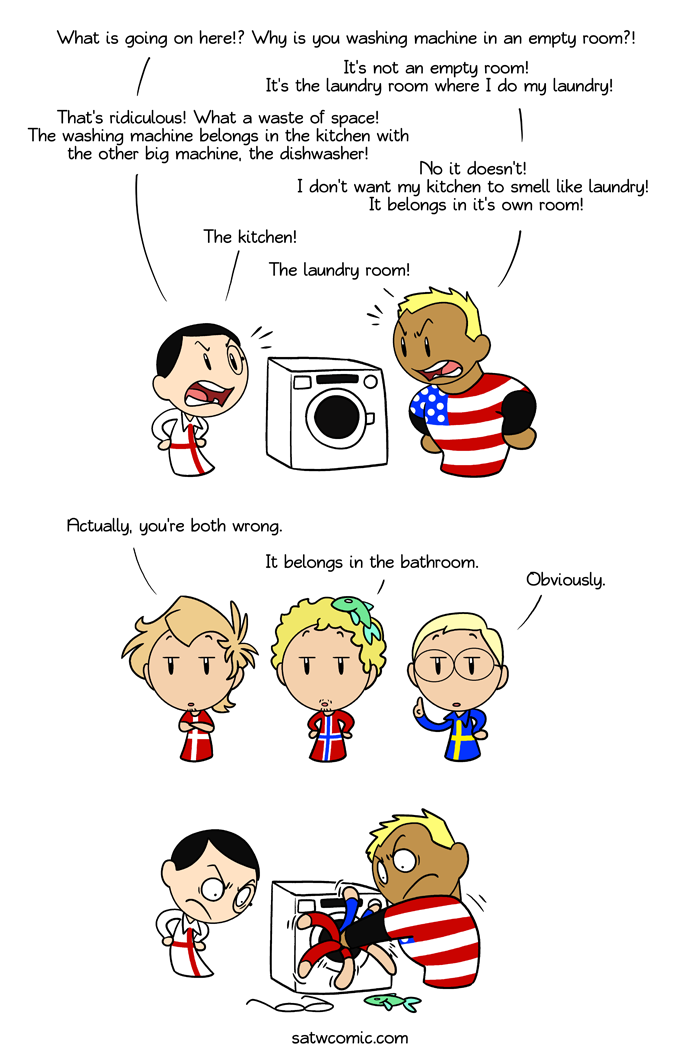 When I lived in England I thought the washing machine was in the kitchen because we had a tiny shitty house, but turned out that's very normal in England. Where do you keep your washing machine? 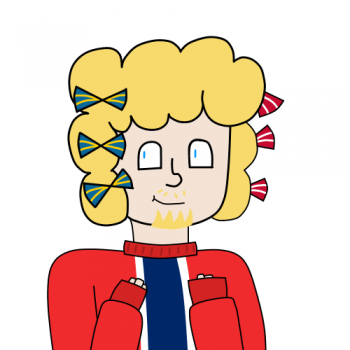 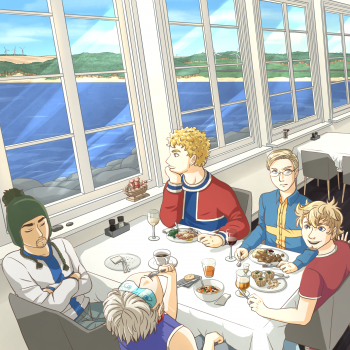 A dinner by the coast
396 Comments:

Well of course Britain does laundry in the kitchen, it's not like the British are known for cooking in there...

Have my upvote, now excuse me whilst I learn to cook...
IrquiM

@CorruptUser Maybe British cooking will improve if they actually involve the washing machine in it.

@CorruptUser Maybe that is the problem with British cooking?

They think you're supposed to cook with the washing machine...
ImportViking

Washing machine? I just keep a bunch of gnomes enslaved in my basement who fix such things for me.
odourpreventer

At least according to Swedish standards, the washing machine must be installed in a room with a floor drain. This obviously excludes the kitchen. Since most apartments only have one in the bathroom, that's where it goes.

@odourpreventer Is that the law or just the standard way to do it?
I live in sweden and put my washing machine in my kitchen as my bathroom is to small for a washing machine
Thelving

@odourpreventer In Pakistan, the kitchen has a floor drain. So it stands to perfect reason that the washing machine is located in neither the kitchen nor the bathroom, but outside the house where there are no floor drains at all and the water just goes everywhere.
Carewolf

@odourpreventer In Germany even the bathroom doesn't have a drain.
Mistwraith

The washing machine I the kitchen in the UK would be historical.
When washing was done when there was no indoor running water, you would collect the water and heat it on the kitchen stove then transfer to the wash tub either inside or by the kitchen door, later when indoor plumbing happened the tap would be in the kitchen, the toilet would still be outside for many years.
Early washing machines would require the water to be heated first, so kitchen was the nearest place and it had the sink to empty the water to the drainage.
Twin tubs came along and you had to fill them, kitchen sink tap via a hose, though they heated the water they didn't drain straight into the drains, they pumped water back out via a hose into the sink. You would roll it out from under a work surface or corner and use it that way then roll it back when finished so closer to a sink was the best place, hence being placed in the kitchen.
When automatic machines appeared they replaced the old top loaders or twin tubs, they obvious place was replace one with the other and so in the kitchen they remained.
Laundry rooms were for larger houses with servants.
Also where electricity was initially placed in houses forced practicality of the machine position, few houses in the UK have a electricity socket in the bathroom but lots in the kitchen.

@Mistwraith
Thank you for that answer!
Carewolf

Mis-representing Denmark. Let me fix it.

Denmark: It belongs in the brewery (bryggerset)
Everybody: The brewery?
Denmark: Yeah, you know the brewery room in every home?

@Carewolf I disagree, I've never even heard of that room.

@name Maybe you live in an appartment and never been in a classic Danish rural or suburban house?

@Carewolf That's true, the only houses I've ever been in are my grandma's and my uncle's and their washing machines are in the basement and the hallway, respectively. Both their houses have ridiculously small bathrooms however.

Good lord... Why would you want the washer and dryer in the same room where you take a shit? Imagine taco tuesday, if you did laundry on that day...

@Lichruler windows. At least in Germany only cheap and old apartments would have none, and even then all I knew would be connected to a decent passive ventilation shaft, chimney style.

That said, I’ve seen all combinations. In the bathroom, in the kitchen, in the basement, either shared or each having their own, possibly in a compartment. That’s for apartments.

With single homes, there would be an utility room, even if it’s not bigger than a bigger closet. Even then I’ve seen people put their machine in the bathroom, but then there would also be a second lavatory, which would usually the one being used for defecation, except in emergencies.
DarkMage7280

@Lichruler Why shouldn't it be in the same room? We have them in the bathroom. It's not like shit sprays around like I was a manure spreader.

@DarkMage7280 I take it you never had taco Tuesday.

@sticpixie I love texmex, but my bowels are used to Finnish food: texmex doesn't faze them.
Dun

@Lichruler Don't shit on your dirty clothes you weirdo.
VinnyHavoc

@Lichruler Why would you want to have the bath, the place you get clean, and the sink, the palce you clean your teeth, in the same room here you take a shit? Even worse when it's all right in a cramped row, with the toilet EXACTLY between the bath and the sink.

If I had my choice, toilet would get it's own dinky room. With a window. Small window, with some kind of shade for privacy, but need fresh air.

@VinnyHavoc In Australia, we do exactly that - nearly all houses have the toilet in its own little room by itself, with the bathroom being the room you have a bath and/or shower in, shave in, brush your teeth in, etc. Even cramped little flats have them separately.
The_Pirate

@VinnyHavoc - here in Denmark, in small-ish apartments and small houses, there is a rule-of-thumb regarding toilets/bathrooms; when you come home from a night out, stinking drunk, it is considered ideal if you can sit on the toilet, do your business there and puke in the sink simultaneously. It's a further plus, if you can peel off your filthy clothes (beer and red wine stains, puke, road dirt etc.) and throw them in the washer without interrupting the aforementioned tasks...

@The_Pirate I dunno bout you, but puking in the sink sounds like a great way to clog the drain. Harder to plunge the sink than it is the toilet, and puke doesn't tend to clog toilets.

But if you're poppin a squat, puking, peeling off drink-and-puke-and-mud splattered clothes and trying to figure out the settings on the washer all at once? ... First off, kudos, I couldn't do that sober. Secondly, maybe there are greater life choices to be considered than placement of appliances!
Mirijah

@Lichruler
Actually, in the EU we don't really use dryers a lot at all ;)
It is not common to have or use a dryer. They are bad for the clothes, bad for the environment and bad for the electricity bill. Using a dryer is considered to be lazy and stupid. Instead, we hang dry our clothes. Usually outside, either in the garden or on the balcony.

@Mirijah Also, at least in Estonia it is fifty-fifty whether the toilet is together with the bathroom or a separate room. Both options are considered normal.
A "seperate" laundry room is an option, if you have a sauna. Then it is not unusual to have a washing maschine in the room before sauna, that is used for taking of clothes and keeping sauna stuff. And maybe even beer.
spiros26

what if we combine polandball and Scandinavia and the World (satw)?
Bea

In the US, a small designated closet where the piping runs shortest to the hot water heater...

@JoB Front loaders are increasingly common in the US
ArynChris

In the states, I've seen it many places: a separate room in newer houses, a separate closet in newer apartments... in renovated or older homes of all kinds, the bathroom, the kitchen, the basement, the master bedroom, the garage, the entry hall, the den, the rec room, the tool shed (why??), a child's bedroom. My parents built their own house, and they put the laundry machines in a "mud room" between the garage, door to the back yard, and the rest of the house-- the idea was that children covered in snow, mud, and/or other messy substances could change into clean clothes at the same time they took off their shoes, and then the dirty clothes could be washed in that very room without ever bringing outdoor messes into the house. It didn't always work in practice, because they forgot that children are usually rushing inside to use the toilet and don't have time to change clothes first. But they tried.
RyanW

Well, the laundry room is pretty much the cleaning supplies storage room as well - some of which I really don't want around my cooking area. It might also have a sink, for things you need running water for, but that you don't want to do in a sink used for food prep or personal sanitation. I clean things like paint brushes and muddy boots in the laundry room sink.

@RyanW #9820373
That sounds like what we would call a bryggers. Its mainfunction is all that other things, but in a house that has one, it is common to pklace the washing machine there.
Add comment: Please Sign in or create an accout to comment.