A study was made to see which Western babies were the quietest, and people from Denmark reported the least crying.

But when the scientists went to Denmark to study it, they found that Danish babies cry just as much as other Western babies. It turned out that even though you'll find plenty of Danes complaining about noisy babies, Danes in general are much more tolerant of crying babies than in other countries and it takes more for them to get annoyed. So the scientists then tried to explain that, and so far their best guess is that Danes have more room for children of all ages expressing themselves.

The quietest babies in the world can be found in African and Far Eastern countries, where the parents (or grandparents) usually have the babies with them at all time, which makes the babies feel safe. 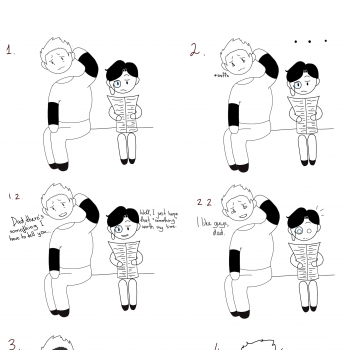 Out of the closet 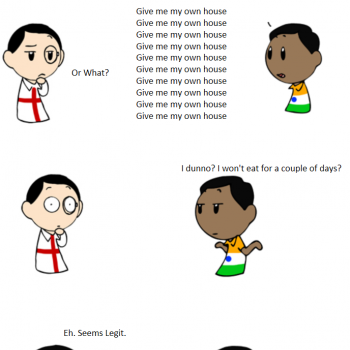 We live beside sweden, we are pretty used to it.

@therdoez I live in America and I can still feel that burn.

@Lord_Skata Well we have the records for most fought wars. Are you surprised we still has it out for each other?

Surely the loudest and most obnoxious cry baby in the world currently resides in the white house. Sister America should be used to it by now ;)

@loupblanc Sister America should be used to it since she cries just as loudly and obnoxiously as the guy in the white house. It is the rest of us, those who used to be called "conservatives" but are now politically homeless, who are sick of the whining and victim mentality, but most of all the infantile rage at everyone around them that we see on both the right and left.

@LoveIsGood learn to enjoy comedy of campus commies (who would have thought that Auburn would be safer for them than Berkeley?) pretending to be revolutionaries, otherwise you may need antidepressants.
Jepski

@Zeust because you are 676 years old, you could be everyone's dad

@sugarbasil From what we've been seeing in the news, it sounds like a typical American college campus when anyone who isn't a left-wing speaker shows up to challenge the accepted dogma of the students.

@LoveIsGood - If by "challenge the accepted dogma" you mean "spew hate speech for the sake of hate speech" than you are correct. I am, of course, assuming that you are referring to Milo Yiannopoulos, the self-proclaimed troll from Britain.

@Mecharic "Hate speech" is a phrase you use to suppress speech that you hate.

You do yourselves and your peers a disservice when you use name calling to try to rebut those you disagree with. If the guy is so wrong, why not listen to what the guy has to say - record it and transcribe it even? Then you can write a point-by-point rebuttal for your student newspaper. You'll feel good about writing it (anyone who argues on the internet knows how good it is to demolish someone else's arguments), and your peers will benefit from knowing WHY the guy is wrong instead of just knowing that SAY he is wrong.

You can't prevent everyone from hearing Yiannopoulos's words forever. Wouldn't it be better to equip them with the reasons to reject his speech if his speech is so bad?

@LoveIsGood No, "hate speech" is a legal term for speech that explicitly calls for violence against people based on their ethnicity, religion, or sexual orientation. Milo's speeches qualify on all three regards: he encourages violence against gay and transgender people, Jewish people, and refugees from Muslim-majority countries. His followers are often armed and belligerent when they show up to his engagements: at one such event, one of his fans shot and seriously wounded someone. They make death threats against people on and off campus. Inviting him to speak (especially at an event where there is no one to counter anything he says) does not offer any benefit to students at a college and actively puts their lives at risk.

"at one such event, one of his fans shot and seriously wounded someone"
Police say the man who fired the gun Friday night at the University of Washington claimed he had been assaulted by the man he shot, and that he believed he was a white supremacist. Friends of the critically injured man, say he is no racist.

After the shooting, the man, accompanied by another person, turned himself in to UW police, Rittereiser said in the news release. Both people were taken into custody.

Detectives investigated and, after consulting with the King County Prosecuting Attorney’s Office, released both people, according to Rittereiser.

By the way, this is just precious:
" One said his friend supported Bernie Sanders in the Democratic presidential primary, and both said he sports an anti-hate tattoo that consists of a black swastika surrounded by a red circle with a slash through it."
Next time he'd better be smart enough not to dress like a skinhead and cover up a swastika tattoo, in case someone does not understand peculiarities of punk subcultures.

@comrade_Comrade You ask for examples of Milo's hate speech but apparently missed that the very article you linked to said that he was permanently banned from Twitter for racism and misogyny. If you want actual examples of what he's said, I'm sure you can easily find it- I'm not going to link to it here.

@ShoggothOnTheRoof "that the very article you linked to said that he was permanently banned from Twitter for racism and misogyny"
I've seen the tweet he was banned for, it does not qualify as call for violence. So, examples.

"If you want actual examples of what he's said, I'm sure you can easily find it- I'm not going to link to it here."
In other words, "I have never read Boris Pasternak but deeply condemn him".
Welcome to Soviet Union, comrade.
LoveIsGood

Regardless, "hate speech:" is still a term that haters use to suppress the speech of people they hate. The fact that it has been incorporated into law does not make it right - in fact it makes it fare more evil because you are now using the threat of government sponsored violence to suppress the freedoms of those you despise. You may say that it is only used when there are calls to violence, but I saw the translation of what Geert Wilders was arrested for, and it wasn't calling violence any more than any one else seeking changes in law is calling for violence - that is the same kind of violence you desire when you seek to outlaw "hate speech".

If it comes to that, if you use government-sponsored violence to suppress the freedom of speech of those you despise, how do you expect them to react? With a peaceful dialogue that you have forbidden to them?

@LoveIsGood Why don't you actually look up quotes of his?
ShoggothOnTheRoof

@LoveIsGood Or look at what he wrote when he was an editor at Breitbart?
Baconcheesewheel

@Baconcheesewheel How about accepting some ideas from somewhere other than left or right? Now that Trump is being used to define "the right", I see very little difference between the right and left. Maybe we need a political movement that promotes freedom, family, generosity, responsibility, equal treatment for all Americans regardless of race or religion, rule of law rather than of whim etc.
StuckovertheAtlantic

@Newnetherlander Also sounds like a Southern state back when Obama was in office.
Myrica

And here I thought Denmark would feed that baby from his green bottle.
Turns out it's the opposite: Denmark drinks from that bottle until whatever the baby does is fine with him. Quite reasonable, as far as I am concerned.
Shitzadorina

Babies cry, its how they communicate with people around them. How else would you know how a baby would be hungry, need a diaper change or generally be lonely. Crying babies don't annoy me, it's when their parents ignore their cries and don't acknowledge it which ticks me off, because obviously their kdis are in need of something.

@Shitzadorina babies also cry when you're sitting and holding them, instead of standing. Or when they don't like wearing clothes. Or when the brand of strained pees you're feeding then isn't their favorite. It's their only way to communicate, but babies are still people. They still have things that annoy them, for whatever reason, they just loudly let you know it.
Boingyboingy

@Shitzadorina varies, I had one with colic, literally cried for no reason, wasn't hungry, didn't need a change, just had gas. We did everything the doctor said, he had never seen such a ridiculous case. We could get her to sleep 6-8 hours a night, but she wouldn't nap unless you were holding her, and even then she'd cry for 30 minutes straight first. Our parents and siblings where the only reason we retained any semblance of sanity.


It got funny when she was 6months or so, she'd cry if she heard our voices, but if she didn't she was fine. She wanted to be included in everything!

@Boingyboingy Did your doctor tell you to stop with cow-milk for 6 weeks? Our doctor told us to stop eating milk products for a few days and see if it got better. It didn't so we started again. A month later we found out that it takes much longer for the milk protein to go out of the mothers milk so after about 4-6 weeks it started to improve and our daughter could sleep without crying or being rocked to sleep constantly. Milk protein allergy is very tricky to get around, there is milk protein in almost everything.
DarkMage7280

I'm quite mature (read: old) and I'm still crying... since that idi0t was elected over here.

@shedemon "I'm quite mature (read: old)" well, Americans will elect you if that's the case! (Or not, there is lots of sexism around here and bc you're a girl, they will probably hate you for trying
HollieKim

This is what happens when studies are done by polling instead of actually making objective observations and measurements.

@HollieKim I kind of like it when they do both. It gives us insight into how people think and view things verses what is measured and objectively observed.

Anyone else noticed how the Dog's accesory changed on each pannel?

@UnPokemon I saw that too. First it was sucking on a dummy/pacifier, then it was choking on a rattle then finally it had bottles in it's ears
csizmawarrior

@Eckerman
Toddlers are basically upright-walking babies who learned how to use tools for making a racket.

@minando the British actor Martin Clunes once remarked in an interview (I think it was on Parkinson) that babies are just like miniature drunk people.

on another note, in the Faroe Islands we have a proverb: Sannleikan fært tú bara frá fullum fólki og smábørnum (You'll only get the truth from drunk people and toddlers/babies (that have learned to talk)).

@minando mine is exceptionally good at it. Ever since we gave him Lego, he's been noticeably quieter, tho'...
Add comment: Please Sign in or create an accout to comment.