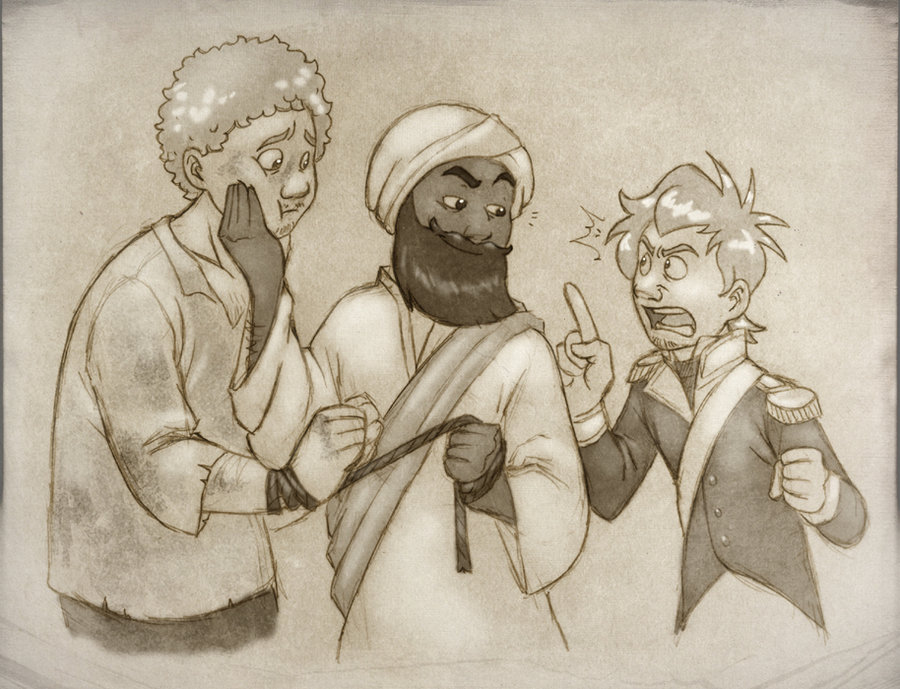 Yesterday they showed a program about the one million white slaves (of which three thousand were from Scandinavia) that were bought and sold in north Africa.

One of the stories was about a Danish boy who ended up being a slave for 12 years, and the other was about a group of Norwegian sailors that ended up on the slave market, and how the Danish state went into frantic negotiations with the owners to get them back. Most of the white slaves died, either from the hard labour, from being whipped to death or simply because they got deliberately killed by their owners, so the Danish state knew they couldn’t wait forever.

Three years later they finally managed to pay for the sailors, and they all returned home safely. 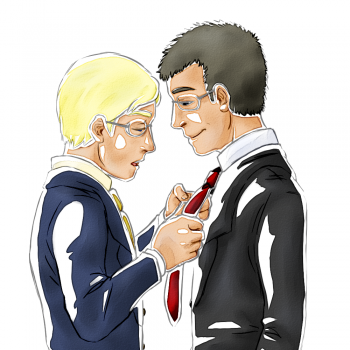 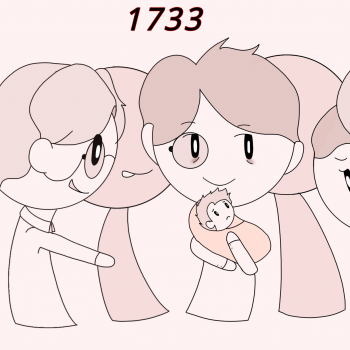 How about the irish slaves, african slaves were more expensive than irish slaves? Why european in america hate irish so much?

@Zuperkrunch I must say, I disagree with the text about the slaves in America being treated better. However, I think we can all agree that slaves everywhere in the world were horrifically abused.

@TokiWartooth yup, "slave" is not a good words.. But i never heard about white slave and they were treated worst than african slave.. I still don't know why england hate irish that much? Beside that irish are catholics, are there any other reasons? I don't know their history..

@Zuperkrunch It started when England began conquering parts of Ireland in the middle ages, and the Irish refused to assimilate into the English Culture. Then when the Church of England was founded, the Irish refused to give up their Catholicism. Then when the industrial revolution occurred Ireland remained largely agrarian. This, combined with racist theories, lead the English to believe that the Irish were sub-human and consequently to prevent them from getting aid during the Irish Famine (Sir Charles Trevelyan, the English person whose job it was to manage Ireland, justified this decision by claiming the Irish deserved to starve).

@PaxRomana ow.. That's why the irish become worst white slave in the usa.. Thanx for the explanation...
kier

@Zuperkrunch The Irish were never slaves, they were indentured servants. And no, they were not treated worse than black slaves, despite what random pictures on the internet tell you. https://en.wikipedia.org/wiki/Irish_slaves_myth
Jenny

@Quartin: And should we kill everyone who buys slaves too? How about those people who make it impossible for slavers to feed their families in any way other than trading slaves? I'd think that responsibility lies with anyone wealthy enough who decides not to encourage any more humane businesses anywhere in the third world, as well as anyone who takes for themselves resources that could be used to keep any part of the third world in food, water and education. Should we kill them too? I'm sure if we kill enough people someone will get the hint and work to make the world better.
Violetta

Slavery isn't over yet, and I cannot foresee a time where it won't be - sadly, nowadays it's masked in different forms. Everything from little girls/boys to adult women in human traffficking rings, boys brainvashed to become soldiers in various wars, even beggars in large cities aren't always working for themselves, but for someone else.

It was only over for about 10 years in the USA, until white supremacists rallied. They mostly refused to hire black people for paying jobs, passed new laws against vagrancy and loitering that basically made being unemployed a crime... the punishment for which was forced labor; in other words, right back to slavery again, but no one (who was white and mattered) protested because these weren't "slaves" now, they were "criminals". This relabeled slavery system continued until... uh... oh, yeah... is STILL CONTINUING.
The Penal Labor system does the work of about 19,000(*) jobs in the USA, rarely is it voluntary, and when there IS pay, it's pennies on the dollar of a proper wage, well below even minimum wage. Prison workers have none of the basic rights of free employees, despite doing the same jobs, and are almost constantly abused and overworked.

(*)I keep getting different numbers from different sources for this number... I think that's a bit low, honestly. It would imply less than half a % of America's incarcerated work penal labor.

The American penal system is horribly broken, unfortunately ... speaking as someone from a country where foreign criminals compare our prisons to hotels. It's designed to make the inmates experience life as they would on the outside, with financial responsibility over their own food (prison credits, for which they can buy food ingredients, cook it themselves or as part of a group meal), jobs and training designed to make them proficient in a real paying job on the outside (the pay for this goes to their prison account to help pay for their stay), and there's access to multiple religious rooms, a library, sports and hobby activities.

The American system is better than some others, but if you treat someone as other than human, they're going to come back out exactly like that, if not worse.

You have the right of it.
America's penal system is not about rehabilitation at all. It's about removing undesirables from the general population... and about profit. Aside from "keeping people we're nervous about away from the rest of us", the intended purpose is purely punitive, not about helping these people become productive citizens upon release (IF they're released; every excuse not to will be attempted).

What country ARE you from? You're not showing a flag.

Fixed the flag - guess I was feeling a touch lazy the day that I created this account, sorry. I'm from Denmark =)

That is even worse than I imagined - I knew it was more about punishment than rehabillitation, but to try to keep them inside just to maintain a steady labour force, that's a horrible agenda to have. You're right, that approaches slavery a bit too much. And for those who gets out, without help to restart their lives, most will just return to a life of crime, sending them right back to prison again. That's a vicious cycle.

I hope someday that the Americans will demand a change to that system. Being a 'criminal' means you've made some really bad life choices, for which you should pay, but we owe it to each other to try to help them live in accordance with society's rules again afterwards. Dehumanization is the father of all of humanity's worst crimes.

@Violetta #9826608
I hope someday that the Americans will demand a change to that system. Being a 'criminal' means you've made some really bad life choices, for which you should pay,

You are making a VERY generous assumption that the police and judicial system that puts people INTO the prison are less corrupt and serving their own interests than the prison itself. Many people sent to jail have not done anything wrong, but been in the wrong place & time, and especially with the wrong skin colour. There've been many cases where police have thrown someone in jail rather than leave them free to report their own wrongdoings. Thankfully, living in a new age where everyone and their 12 year old child is carrying a smartphone with a video camera in their pocket, corrupt Police are getting caught in the act more than any other era in history.

But, back on the subject, I have a few videos for you explaining how private prisons work in the USA (presented in an entertaining manner... kind of unavoidably dark humor, admittedly.)

And in case you were wondering who tries to keep those innocent non-criminals out of jail... and why they aren't succeeding very well...
4 Why the Public Defender System is So Screwed Up
Mr_Sparkle

@Violetta I know for an absolute fact that many philippines womens are straight up slaves working in countries like Saudi Arabia.
How do I know for sure?
I'm a single white British male and the Philippine women on facebook search for me and other single white men like me.
I've gotten to know many of them and they basically work all their waking hours as a slave in some rich house/mansion in Saudi Arabia. They don't get paid much but it's enough to send back to the Philippines for their families.
it's grim. I felt really sorry for many of them but they kept insisting I will be their so called rich western saviour who will marry them in the UK. Tried to tell them UK isn't this rich safe haven like they may have it stereotyped to be. Ended up having to block some of them as they are desperate. Grim stuff
epic-pineapple-power

Should we really be qualifying it? Like does it being "white" slavery make it any different from any other kind, or colour, rather?

Also, I get how white folks, especially American white folks feel very guilty about having enslaved large parts of the world for a longer or shorter time, but does that really make it ok to pretend that slavery 'wasn't all that bad really'?

@Sepespian yes, because there are vast swaths of Americans who only think slavery happened to people in Africa. Nobody is saying slavery isn't bad, especially chattel slavery, but ignoring historical slavery from some parts of the world in order to only look at what happened in America is asinine. The east African slave trade is still as brutal as ever, and is a far larger offense to civilized norms than the comparatively brief European African slave trade.

@Aquilinus Then tell these Americans that "Slavery" still exists and has existed for a long time and it doesn't matter what colour someone is they can still find themselves enslaved and that it is a horrible injustice regardless. It is asinine to say that 'non-white' slavery was only the Atlantic Slave Trade and that Black people aren't enslaved anymore.

@Sepespian it's a little more difficult to just tell them, a lot of them truely think that deep in their hearts
its difficult to change people who are like that minds
zhouhuanyue

Hmm... nowadays Middle east is not united by pair of Caliphates... its divided... Is it Crusade time?
Icybeach

Yup, they also took people from Iceland. At the time, it was a big blow to our population. Only a few were bought back (by the Danes, because we belonged to the Danes back then, but the Danish king would only buy back those who had remained Christians, not the kids or adults who'd been made to convert).
satwnhetafangirl

And up until now, abuse like that, especially in Saudi Arabia, still goes on. <:'C

@bubba please remember they attacked so much more than Vestmannaey. We call it the Turk-abductions (tyrkjaránið) even though the Turks had nothing to do with it.
For those interested this explains it pretty well:
http://en.wikipedia.org/wiki/Turkish_Abductions
Add comment: Please Sign in or create an accout to comment.