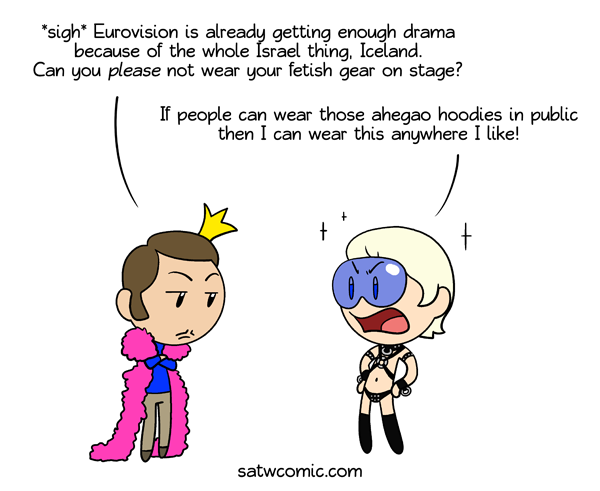 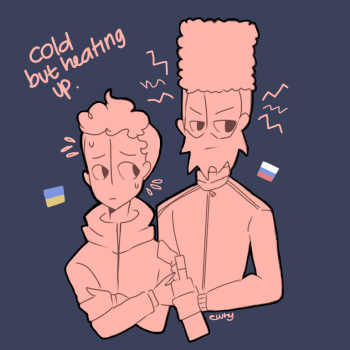 I just noticed that Iceland's act could face punishment for displaying the Palestinian flag during the voting.

this can't be it for eurovision 2019, there's so much quality content. this year is a massive political mess with denmark in the middle screaming 'don't get too political' on a giant chair. there's iceland and ukraine getting kinkily political. there's sweden sneaking three songs in (estonia, sweden and uk). there's norway being incredible. there's madonna. australia is being australia, living dangerously. finland sent darude and didn't qualify. san marino, malta, north macedonia and more all qualified from a massive losing streak. romania embraced the vampire. portugal got weird. croatia had some lovely wings. georgia was terrifying. poland was interesting. there's been eurodrama left, right and centre this year and we're not even at the final yet.

@duskodair Sounds like Christmas at my family's place. Back when we could stand to be together.
duskodair

https://satwcomic.com/fanart/6109/eurovision-2019 I made a part two for this because I definitely had nothing better to do

@duskodair Nice one, but you should have drawn Netherlands looking more like Freddy Mercury. The boy pretty much won just because Bohemian Rhapsody -movie. XD

@Velgar i'd say Kobi Marimi from israel looks more like Freddie Mercury than any of the other contests, also its very bold of you to assume i can draw
Zenon

No mention that Norway was the most popular country by far in the televoting? They even brought in a Sami to do a Joik (traditional spiritual way for Sami people to sing). Seriously, the jury system can go f itself. How did we end up with semi-oligarchic voting system?

@Fettpeis I feel worse for you guys in Norway than I do for us. We still wouldn't have won had the jury not existed (although we would have done much better). But you guys were robbed of a victory

It'd ridiculous. The jury is ostensibly there to combat block voting. Except that they block vote at least as badly as the general public. And some people say, "Oh, but they're professionals, they judge based on a different standard than the general public." I'm sorry, but no, that's not how art works. If art makes you feel something, *it's good art*, regardless of whether or not you're a "professional". You can't have some "expert" saying, "Oh, no, you're not supposed to like *that* music - *this* is the music you're supposed to like. Those other sounds are the *wrong sounds*. Stop liking them!"

Even if people want to argue that it's a "talent contest" rather than a music contest... oh really? Okay then, I challenge anyone here to do Matthías's voice in Hatari - not just "screaming", but to really sound like a wild-eyed demon. Can't do it as well as he does? Yeah, because that's a serious talent, something he's worked years on. But because it doesn't match the stylistic preferences of the jurors, hey, vote it down. And even if it were a talent contest.... as if the general public can't judge talent for themselves?

What having the juries does is:

A) Distorts democratic voting
B) Adds in easy points of corruption
C) Tends to ensure that we get only generic pop and power ballads rather than innovation. E.g. resisting change and innovation.

@Karen As a musician I do feel obliged to mention that the lead vocals would not be too hard to replicate as its trademark "scream" is mostly post-effect distortion. But other than that I have to say I agree completely. The vocals are practiced and the degree of innovation was off the charts I would say. Let's compare it to Sweden...=) What the swede did was not really innovative in any way (but which ESC song ever is), and was visually boring. Hatari broke the mold musically and visually and pioneered a new genre(?)(Can't say I've heard anything like it before). Last year Netta was innovative but did not really break the mold in the same way, merely repackaged and stylized some stuff we've heard before.
And how about that Cyprus/Greece jury thingy? I must admit I laughed a bit when their points were given out. Have to confess to some ignorance on that matter and how it became such.
But seriously, we need more trolls back in the ESC. Need me some Silvia Night and Rambo Amadeus. How was the Icelandic reaction to Silvia Night's participation back in the noughts?
little_donut

@Karen you're right, when they changed the system they said that jury would be there to fix all the prejudices of people, but it is the jury who votes politically!
Also there is some discrimination of everything "hard" or simply different in Eurovision, like Hatari for example, and even if it is different, even if it is not for everyone, people do like this a lot, but jury just go on messing everything up.
I checked Russian jury this year and I've never heard about three of them and I can't trust other two. The story of Belarusian jury is quite suspicious too, and we should never forget that after every final there is one or more people from jury of any country who says something like "Oh, I pushed the wrong button" or "I confused participants"
OohSomeIvie

@Karen I agree. KEiiNO was my favourite, and without the jury vote, would have come first.
The jury votes are all political and it’s never to do with good music. Just cancel the jury votes and the whole competition would be more fair!
But in the public votes when we got 3 points I laughed so hard :P We soooo deserved that :P
DanielPetersen

@DanielPetersen They probably are and I love it XD
lambdanis

The bitchest bitches of Eurovision 2019 all the way, love you Iceland!
IcePhoenix

I can't help but... every year the ESC stays further away from sanity.
One of my friends (sarcastic af, salty and always a little bit drunk) said in our pub: "I don't watch the ESC until my fetish represented!"
He then continued with DESCRIBING his fetish and it sounded a *little* bit like one of the songs...
No further commentary needed.

@IcePhoenix Which fetish, may I ask?

Ugh. I'd love to watch Eurovision. Why doesn't it broadcast in the US? We never get the cool television programs. Can someone take the Kardashians, please? Anyone? I'll pay you.

@tc49pz I think it's streamed on Youtube as well?

@firenter I streamed it on YouTube, but I had to use a VPN in Europe to do so. It's blocked in the US (at least the two quarterfinals.)
Zenon

@tc49pz Because of the internet and satellite tv, every country has the Kardashians in some way.
We cannot escape this plague!
eurobloke

@tc49pz Don't worry, Sweden is coming to the rescue. I found out a while ago that Christer Björkman, the man behind the modern Melodifestivalen (Sweden's selection compeition) and the man who kind of gets whisked away suddenly to produce parts of Eurovision plans to create Americavision... soon you'll have an all out competition between the states.
mysticgirl916

@tc49pz I copy and paste the link for the live stream into proxysite.com and set it to an EU server to watch the semis, and will do it for the final. Canada also has the luxury of watching the shows on a same-day delay on Omni Television
may_g

@tc49pz Maybe you can watch on SVT's site. I'm not from Sweden and I watched the second semi-final there. (I'm not from US either though)
MagnusLindgren