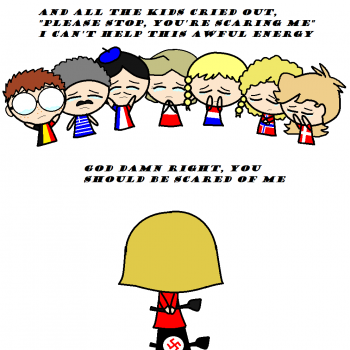 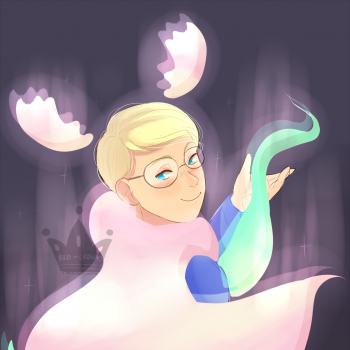 North Korea is a guy hugging a pressurized propane gas cylinder with a torch at the doorstep of his rich brother's house.
CharlesXI

um..Does anybody still know that N Korea and S Korea are still at war? .....No?

@CharlesXI Technically they are still at war, but they officially agreed on taking a break, too. So... not really.

@Jch Yes but that doesn't take away the fact that they're still at war ;)
Although the made a partial agreement of peace they can still send offences.
Lumoseo

@Jch Well we ARE still at war... we just are taking a 'short' break because too many people were dying and we weren't winning, either side of us.
Lumoseo

@CharlesXI We are. We just signed a treaty because too many people were dying and neither of us were winning. And... really, the Cold War is to be blamed when it comes to the question: "Why are we still split?"

So far, Korea is the only country that is still split up.

@Lumoseo It's been so long since i visited the website i forgot what we were talking about. :|

@CharlesXI XD your question was: "um..Does anybody still know that N Korea and S Korea are still at war? .....No?"
So I answered it like that.

@Lumoseo
Ah right. Yes, i've gathered more info on that subject as i was studying the cold war and the Korean war after i posted that.

I'm glad! That's awesome! I mean, it's always nice to know about History, no?

@Lumoseo Yeah, it's good to know at least some context.

'@Lumoseo'
Cyprus, Georgia, Moldova, Somalia, Azerbaijan all beg to differ on Korea being the last split country.
As does China (and some Taiwanese), and Serbia if you ask them.
Cyprus especially is incredibly reminiscent of Korea with a fairly even split into a "South" government and a "North" government. They even feature the old German curse of a split capital city.

Of course most of those examples are ethnic or provincial separatist movements that have some degree of success and subsequent refusal of recognition from the central government, rather than two different governments competing for full control of a country like in Korea.
But the whole Taiwan situation is basically like an incredibly comically lopsided version of the Korean conflict.
Like in Korea the two rival governments control more or less 50/50 of the contested land.
In China, the two rivals governments are um....well one government controls....China in its vast wholeness. And the other one controls the island of Taiwan and a few little doodads near it.
Like if North Korea had pushed the South Korean government into only controlling Jeju.

@sagas Sorry, it was an old comment. I know better now.
Lumoseo

@sagas Again, back then I was ignorant and I didn't know much. Sorry.
Polosha77

When snow/hail/sleet falls in the Gulf Coast:
Florida: "The fuck is this white shit?"
Texas: "Oh hey, snow! I only get this in my most northern parts, and even there it's rare!"
Louisiana: *terrified face* "We must close all the roads."
(yeah, even if there's no ice on the roads, we still close them if there's even a centimeter of snow)

@Polosha77 I swear as soon as a single snowflake falls down there, everyone forgets how to drive.
SchrodySweden

@Polosha77 Michigan: "oh there's 12 feet of snow? maaaybe a day off, if the plows don't have enough time before schools start"
satwnhetafangirl

@satwnhetafangirl North Korea doesn't have the ingredients to make Kimchi, so they make... war? XD

Yeah you're right. Most of their money gets wasted by the leader.

@satwnhetafangirl Yeah... it's really surprising that they haven't fallen yet. I really don't know what they are surviving upon.

@Lumoseo They actually have money, but it all stop at the leader.

@satwnhetafangirl Yeah, think of all the donations they get... but they used those money to build a SKI RESORT once. COME ON, their people are starving and dying and they build a SKI RESORT. -_- That's why I really hate the Kim Dynasty.

@Lumoseo Kim Jong-un has 4 billion dollars, his dad had 3. But their people are starving. Dude, if you can't rule a country right, just let it go!

Guess what? Another person just escaped from North Korea. And this is important because usually the people escaping from North Korea are the ones who are poor/starving, but this particular person is someone who had an important position there, which means that he wasn't poor or anything but he escaped anyway.

Even the high officials know that Kim Jong Un is a dictator.

@Lumoseo But strangely marijuana isn't illegal there. Maybe it's because he smokes it? (Cause when I see his photos his eyes look sorta red)

@satwnhetafangirl Meh, Kim is quite unhealthy without the marijuana already, I'm just hoping he dies soon so that North Korea is left without a ruler XD

@Lumoseo Does he have a wife/kid? Besides, he still has siblings.

@satwnhetafangirl The siblings weren't able to be leader because they were too close to the Foreigns or something. That's why Kim became leader even if he was the last kid.

He does have a wife and a child, but the child is very young, like three or something(I wonder how it's like to have a cruel Nuke- crazy guy as a daddy...)

@Lumoseo He's crazy alright! No sane person would throw their uncle naked into a cage of hungry dogs...hope he doesn't do that to his wife and kid.
Bhekizizwe

@satwnhetafangirl They eat Kimchi in South Korea. In North Korea they eat other people. Because there's nothing else to eat. Because North Korea's been in a famine ever since the USSR fell. Because The Kim Dynasty hordes all the resources and force everyone else to live in a dystopian nightmare.

I don't think North Korea will fall on it's own. I think intervention is necessary; an all-out invasion, a UN Peacekeeping Mission ... something. Just anything other than sitting around and waiting for the butchery to run it's course (a tactic that NEVER WORKS).
DanishPride

SNOWFLAKES?? *Runs for her life only to slip on a single particle of snow, somehow.*

@DanishPride Seriously? Denmark has to shut up and pay attention to what is happening in the real world sNOW.
ladyluck

this thread is gold and it's only two comment long
Spicy

Nazi Germany, do all of us a favour and crawl back to your little whole before you cause mass destruction, eh?

@Spicy what is this snoooo or hale or sleat you speak of?
Polosha77

@Polosha77 Jakarta : I think it's that thing... *points to an ice cream vendor*

@Polosha77 Jakarta : Yeah, I wonder why Denmark is scared of it though!

@satwnhetafangirl
Louisiana: "Maybe the cold's finally got to them."
FreyjaRN

@Polosha77 We banned that wintry dandruff stuff in the Bay Area to the higher altitudes, where it won't bother us on the coast.
Lys123

Sweden and Norway's expression of 'really?' says it all.
johnlinn