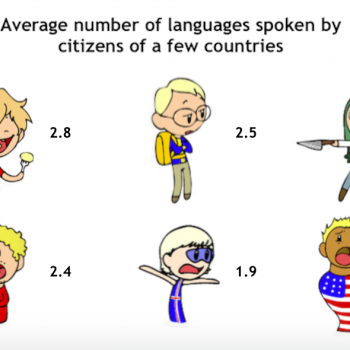 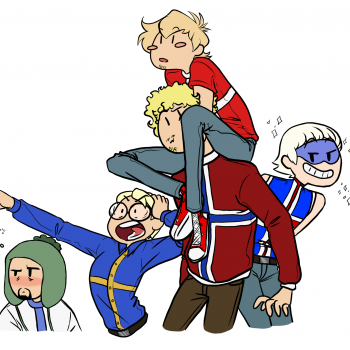 I totally diagnosed Sweden now. He has suppressed his ancient sexual desires for horses and goats and other animals with hooves. And when he builds the giant goat and looks at it, he is overwhelmed by sexual desires, and tries extremely hard to deny and suppress those feelings, so hard that his personality splits in a storm of dissociation and he becomes arsonist and burns the goat so that the tormenting sexual desires goes away. And seeing the goat burn snaps him out from this psychotic episode and he doesn't remember burning it down himself.

@real-cool-cat in the sense of Sweden being a single character (and not an avatar of an entire nation) that makes disturbingly much of sense.
Kuutar

A big Finnish textile manufacturer, Finlayson, has announced a design project called "100 leijonaa", 100 lions. They are asking people to design their own ideas of the Finnish Lion, our coat of arms animal, to celebrate both Finland's 100 years of independence next year and the multicultural society Finland is today ("we have room for more than just one kind of lion"). Now we are wondering in a geek women's group how we could persuade Humon to take part in this, because the "Special Lion" drawn by her was the first thing we all thought about when we saw the announcement.

@Kuutar If you use the @ to tag her in she might see your comment, though I'm not sure because she rarely responds. I believe there's also a satwcomic email address. If all else fails you can ask Dayvi to pass her the message, it seems Dayvi is online relatively frequently the past week.
ThorsomeTarmukas

@Kuutar
I kind of fail to see how 100 special lions should celebrate the 100th year anniversary of Finland, given that the Russian Empire used to have 200 ethnic groups and Finland seemed to be in a bit of a hurry to get away from that. As I understand, the only purpose for the existence of Finland as an independent state is to keep the finnish culture and finnish language. If there is a need for 100 lions, those 100 lions should each represent 100 maakunnat (counties) of Finland. As for the token of multicultural, you could add Estonian and Karelian counties.

And I strongly disagree with the suggestion that "we have room for more than just one kind of lion". Actually, there is no room even for one lion, because the local habitat is already used up by lynx (ilves). The choice is that between multikulti Canada or monokulti Japan. Or so it seems. The reality might be more like multikulti Sweden turning into Irak.

Lions are not part of Finnish or other Nordic's nature, but if we really think about it, neither is the Nordic cross real part of flag, since the whole North had nothing to do with Christianity, we had Scandinavian gods with different variations, based on the forces and phenomena of nature, like Thor, who has his own equivalents in different poems, including Finnish national epoch, Kalevala, and I believe this is also the case in Estonian Kalevipoeg. Variations of the same Nordic gods, that were based on the nature and animals.

Christianity, just like all Abrahamic religions (Judaism, Christianity and Islam) are from Iraq and came here through Europe. They have nothing to do with The North, that middle eastern religion was forcefully rammed down our throats. Jesus was a "sand n*gger". So in a way, Iraq people took away our culture and even our flags a long time ago. Did it destroy our culture? No, we abandoned all religions. Which is good, because they are all a bunch of hooey, and we can concentrate on real hard sciences, math, engineering, electronics and computer sciences, in which we excel in Nordics and even in Estonia. And Finnish culture and language was preserved even after being 400 years part of Sweden and 100 years an autonomous part of Russia.

And there is no taking over any place in Finland like there is in Sweden (And I don't think it would ever work in Estonia either). All people here either behave or we make them behave. There is no way there could be suburbs here where ambulance or police wouldn't dare to go. We have had civil war and other unrest back in the day and we are well prepared. We can arrest more than 100 000 people if necessary. We will send an army and Hellmarch of jaegers in endless waves and full-scale heavy artillery fire and incendiary rampage of biblical proportions if need be to take back the suburbs. Immigrants would escape back to cuddly ISIS in panic and horror after we strike with fiery wrath of norse gods. There's no taking over us from inside nor outside.

And since it's the national Jean Sibelius day today: https://www.youtube.com/watch?v=D7b8E2lgLY4

@real-cool-cat
Exactly.
In my opinion, both the lions and the crosses should go. It is just another attempt at virtue signaling aka deception aka maskirovka.

[ Did it destroy our culture? No, we abandoned all religions. ]

But the message accompanying the adoption of the 100 lions is clearly devised to subvert the native finnish culture. It is a form of mental conditioning and in the case of small children it is a form of mental programming, I'd even say mental cracking or defacing. By itself it is not the end of the world, just an attempted death through a 1000 cuts.

The Nordic Cross does represent Christianity, but we don't really even see it as a religious symbol. Even all the several songs about our flag sees only two colors, blue and white, and usually nothing about cross. Those two colors, are used often as euphemism about anything Finnish-related and reminds about views of summer sky in our nature or at the porch of sauna. When someone says that he flew back with blue-white wings "Sinivalkoisin siivin" everybody knows that it means traveling using Finnish airline Finnair.

And the Nordic Cross and lions were used already in 1300's in Kalmar Union, and it has become a trademark of not only Nordics but The North, I can think of 11 different flags in Northern Europe that uses the Nordic cross, including Åland and Faroes. This does not include England, Scotland etc. If we count the cross in Union Jack as a Nordic cross, then it is in way over 100 flags worldwide, in all British territories.

So believe be, something that is so deeply-rooted and dating back almost millennium, symbols of such venerable history of unity through both glorious and awful centuries up to this day, is definitely not going anywhere. From Viking age to great bloody wars to most well-being and socially progressive area on the planet and a paradise on earth. And besides, who doesn't love such adorable creature like our beloved Special lion? :D

And as to the cross and the vikings, the vikings were finnished by the cross.
The viking cross was triskele.
Edit. Or sometimes a reverse swastika.

'@ThorsomeTarmukas' Vikings were, but the unity of Northern people predates the Cross and the Vikings.

Do you mean your former president Ilves, he was a very "special" man indeed. Sky News interview was one of the most memorable interviews with him, I laughed my eyes wet. :D

@real-cool-cat
I meant the 600 lynx in Estonia and the 2300 lynx in Finland (and 1500 in Sweden). Althogether, the nordic lands have a division of lynx, each as deadly as Simo Häyhä. Lions are hierarchical pack animals and rarely survive alone. Lynx are lone survivors.
Edit. Lions team up to kill a smaller guy. In heraldics, lions is about a king forcing others to serve him in forcing yet others to serve him. A lynx would never force others to serve him, lynx represent democracy.

But yes, TH Ilves has his moments. On the other hand, in my opinion THI furthers an agenda and makes compromises that are sometimes at odds with the will of the majority of estonians. And in such cases he likes the democracy and teamwork done in his way.
real-cool-cat

'@ThorsomeTarmukas' ...and I really meant I like that slightly kooky guy. No need to think that I was talking shit about your former president with his rocking bowtie. It was just so funny that when Sky News reporter was horrified and stuttering in panic that Russia might attack Estonia, that your president was only worried that they didn't say his name correctly. :D He is a real SpeciaI Ilves. I guess people of Estonia are not too much afraid. :D :D
Ziebenhaub_the_Texan

China: Do you have any advice for my new goat I'm going to make and burn?
Sweden: I would recommend magnesium. You have a lot of it, and it is flammable, but in large pieces, it is unlikely to completely destroy anything. So, as long as you don't have any small pieces involved, that's what I think you should do.
China: Okay, thanks for the advice Sweden.
America: Your goat has been burning for a while. Don't you think it's time to put it out?
China: Yes, that would be a good idea.
America: Okay, I have a bucket of water-
China: America, no- Oh dear god, YOU FUELED THE FIRE!!!
America: I'm sorry, I didn't know!
Finland: Perkele...
Tudpool

Hah I love this tradition. My favourite was the two guys dressed as Santa and the ginger bread man who shot a flaming arrow into it. Just wtf XD

@Tudpool my favorite is the year when someone tried to steal it with a helicopter.
KalleKnug

I actually think we'd be sadder if it didn't burn down, it's good to have traditions that involve fire imo
ImportViking

Meanwhile in the shops in Sweden.... http://kuvaton.com/browse/45704/pukit_ja_tikut.jpg

(that's goats on the left, matches on the right. Talk about product placement).

@ImportViking Someone must have done that on purpose for laughs XD. That's just too odd an arrangement to not be consciously made.
ImportViking

If there's something strange in you neighborhood
Who you gonna call?

If there's something weird
And it don't look good
Who you gonna call?

The goat survived in 2017! They needed big fences around it and 24/7 surveillance by a professional security company, but hey...

@ImportViking I would've gone with a fire arrow

@That0neGuy I highly doubt you know how to shoot an arrow, much less a fire arrow
ApplesRock

Why don't YOU go FUCK YOURSELF.

@Fluffkin Oh gosh, I laughed at so had XD