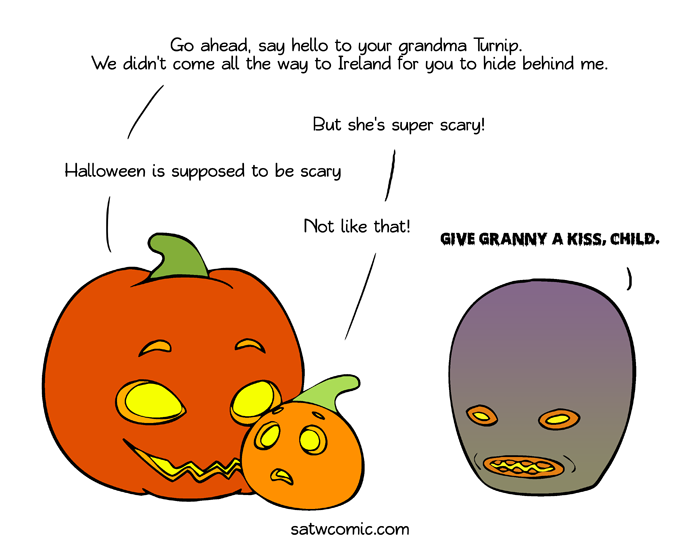 We've all seen the photos of the terrifying turnip lantern. People back in the day were scary as hell. 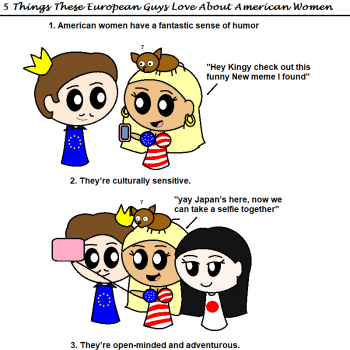 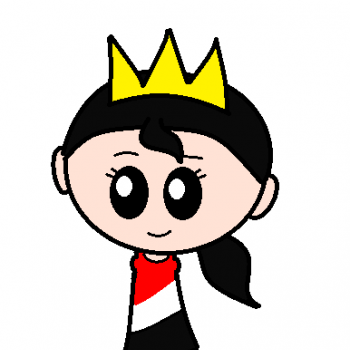 "TAKE THAT FROWN, AND TURNIP UPSIDE DOWN, DEAR."
ScanianDreng

Strangely enough, I didn’t know about turnip lanterns before. Interesting.

This reminds me of a tradition we have here in Sweden and Finland (I think), which is to make snow lanterns during winter.

A bunch of snow balls are stacked like a cone and then there’s a candle in a lantern beneath, it’s beautiful actually: 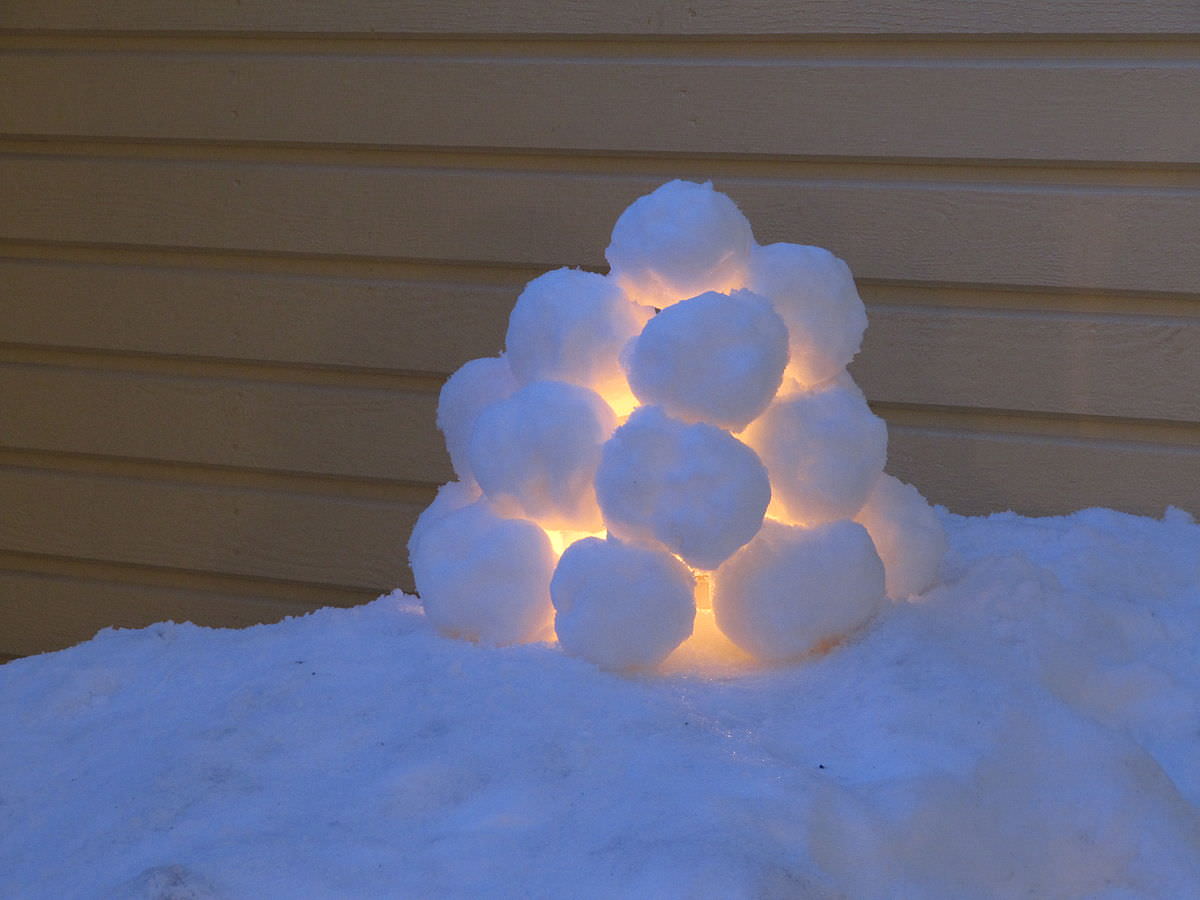 People tend to use electronic lighting a lot more nowadays though, for obvious reasons.

Sorry, I shouldn’t bring up Jul during Halloween times.

@Wortel It is nice, feels cosy when you’re sitting inside and looks out at it too. There’s not much of a risk of anything nearby catching fire either.

Yes, we share this tradition.
Lately people have also started to make these (easyer if theres no snow or it's too cold for proper snowballs)
https://static-sls.smf.aws.sanomacloud.net/kodinkuvalehti.fi/s3fs-public/styles/medium_main_image/public/main_media/1355234469_original_jaalyhty.jpg?itok=iRzGqhMY

@Kuusi
Ja, that ice one is how we do it here in Middle America. But with our -30 / -40 prairie winters, we have to make 'em big, in a round 20-liter bucket, and set the bucket down in the snow, so that the bottom doesn't freeze. If you're delicate taking them out, you can get these lovely sculpted sides where the ice creeps down just barely to the bottom of the bucket; and they're big enough that the candles have a chance of staying lit even in the wind.
Myrica

@Myrica It is nice. If you like doing things with snow while you're outside, then I recommend making one sometime.

It isn't always easy depending on temperature, type of snow, and wind and such, but if you're not happy with it, then at least you got some ammunition prepared in case of a snowball fight.

@lbisno1 Indeed, you should try it sometime. Just make sure to have the candle inside a lantern, otherwise the wind will probably put out the fire.

You can reinforce the snowball structure by pouring cold water over it and letting it freeze.
The_Blahblahblah

@ScanianDreng Yea snow lanterns are nice, we do this in Denmark too.

@The_Blahblahblah Maybe it’s a tradition that all Nordics do.

@ScanianDreng I'm sure! We do it in Norway too

@ScanianDreng I've never seen this before! It snows here a lot, so this is a wonderful thing to try! Honestly, I can't wait for the first snow now, but I'll have to go out and buy a lantern because I don't have any with a top, and I imagine the snow would drip in and put out the wick.

A small candle won't produce enough heat to melt the snow, but still produce enough light to create the effect.
You can use a tealight and if it's windy, putting it in a clear glass cup will shield the wick some and still let the light spread.
BlodyEyes

So this is how turnips protected themselves from Irish. Potatoes weren't so lucky.
Ptarmigeon

"All the better to terrify you with, my dear."
PeriodicallyStressed

"Halloween is supposed to be scary," with all of the "sexy cat" costumes. I think that Halloween is just an excuse to cosplay now...

@PeriodicallyStressed You're absolutely right! I was thinking the same. What happened to the origins of the holiday where you're supposed to 'scare away the evil spirits' or at least keep yourself safe by fooling them you're one of them. That won't work very well with a Pikachu or a Spongebob costume..
Zeust

@PeriodicallyStressed Where I live, Halloween is still mostly about scary costumes. For general cosplay we've got carnaval

Give the turnip ginger hair and it'll resemble a passed out Irish drunk pretty well.
jonr

"An old Irish folk tale from the mid-19th Century tells of Stingy Jack, a lazy yet shrewd blacksmith who uses a cross to trap Satan. One story says that Jack tricked Satan into climbing an apple tree, and once he was up there, Jack quickly placed crosses around the trunk or carved a cross into the bark, so that Satan couldn't get down."

"Another version of the story says that Jack was getting chased by some villagers from whom he had stolen, when he met Satan, who claimed it was time for him to die. However, the thief stalled his death by tempting Satan with a chance to bedevil the church-going villagers chasing him. Jack told Satan to turn into a coin with which he would pay for the stolen goods (Satan could take on any shape he wanted); later, when the coin (Satan) disappeared, the Christian villagers would fight over who had stolen it. The Devil agreed to this plan. He turned himself into a silver coin and jumped into Jack's wallet, only to find himself next to a cross Jack had also picked up in the village. Jack had closed the wallet tight, and the cross stripped the Devil of his powers; and so he was trapped."

"In both folktales, Jack lets Satan go only after he agrees to never take his soul. Many years later, the thief died, as all living things do. Of course, Jack's life had been too sinful for him to go to heaven; however, Satan had promised not to take his soul, and so he was barred from hell as well. Jack now had nowhere to go. He asked how he would see where to go, as he had no light, and Satan mockingly tossed him an ember from the flames of Hades, that would never burn out. Jack carved out one of his turnips (which were his favorite food), put the ember inside it, and began endlessly wandering the Earth for a resting place."
minando

There should be more turnip lanterns during Halloween!
Tema

WHO did the turnip marry??????
potatoe4life