Be careful what you say

The Scandinavians were pretty convinced that they were the best human race and that everybody else were below them. Especially in Denmark the scientists were very fond of using measuring tools to determine race and intelligence, which inspired Nazi Germany a lot. The Danes who had intended to use the "science" as a base for their welfare system were horrified when they found out what the Germans were using it for and started to realize just how misguided it was.

Nazi Germany loved Denmark though, and because the Danes didn't have an army worth anything, they used Germany's love a lot during WWII to try and help those the Nazis wanted to kill. That's how you end up with stories about Danes shipping 99% of their Jews to safety in Sweden, and how they made agreements with the Nazis that Danish Jews who were sent to camps go better treatment, more food and weren't killed.

As one Danish Jew in a camp said "We got crates with food, letters from our families, chocolate and candy, but the German guards always stole the cigarettes"

Few countries are as obsessed with their flag as Denmark...

Denmark was well aware that it didn't have the military power to fight the Nazis, so the plan was to surrender and cooperate with them. However, they also knew what the Nazis did to Jews, so when reports came in that the Nazis were on their way the Danish government immediately got hold of 99% of Danish Jews and shipped them off to neutral Sweden in the dead of night.
(Unlike in this comic though, the Jews knew where they were going and why)

This of course also means the Jewish community in Denmark is pretty small today. 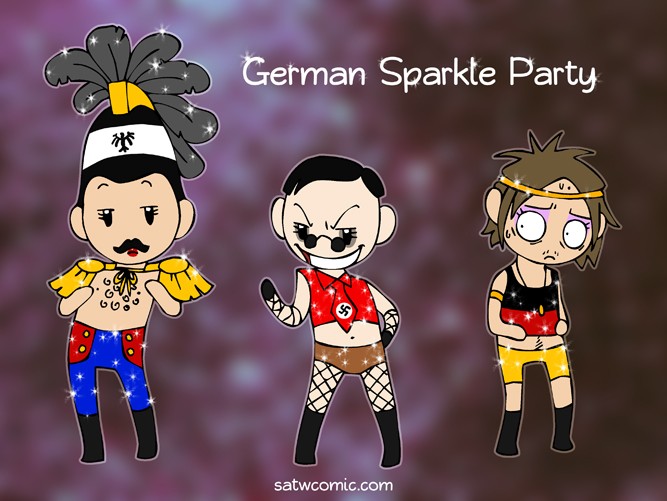 I always wanted to draw Prussia, Nazi Germany, and Germany together. Didn't plan for it to be a German Sparkle Party picture though...

This was inspired by this story http://www.nytimes.com/2011/01/12/world/europe/12nazi.html?_r=1 of a Finn who taught his dog to do the nazi salute during World War II. The nazis did not like that.

Even Nazis have Needs

Thre's a story going around that it bothered Hitler that his soldiers were copulating with non-aryan women, and to stop it he got the idea for a sex doll. He did however not trust German scientists with this task, so he asked the Danish ones he had instead. Apparently they had a better knowledge of such things.

The dolls were never made, but Hitler wanted them to have blond hair, blue eyes and big breasts.

I had to laugh when I heard that Greece tried to bully Germany into giving them guilt-money for all the stuff that got stolen during WWII. Luckily Germany just told Greece that they had already paid them back through EU.

Poor Greece will just have find another way out of poverty.

And poor little Iceland has reached a point where he doesn’t mind where the money comes from.