Support us on Patreon
Language 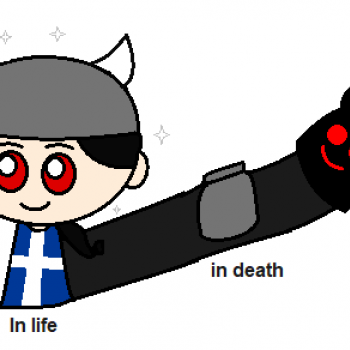 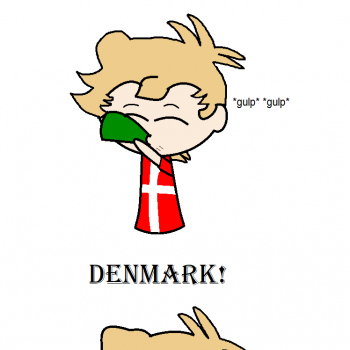 And Denmark never gave her back
685 Comments:

If this different kind of beautiful comes with taqitoes and molè , count me in.
No stupid wall!
dumdristig

I thought at first this was going to be a joke about Americans' ridiculous obsession with tanning beds. It's very fertile grounds, I'd think, considering how silly it is (I personally think most people look best in whatever their natural skin tone is, whether it's light or dark, but even if one doesn't, paying someone for a tan you can get for free outside is an unnecessarily expensive way to satisfy your vanity, not to mention a very dangerous way, given the health risks of tanning beds). But a joke about our racism works, too. Probably would be even better to combine the two. It's especially funny to see people who look down on darker skinned people going to such great lengths to be darker themselves. Almost enough to make you cheer for melanoma as poetic justice, almost...
BadgeOfBall

...Alright, but you realize he got that unnatural colour by lying in tanning booths, right?
Betelgeuse9

The concept of "Latino" and "Latin America" of the United States is so, so wrong.
Being Latino is not an ethnic group, it is not a "race", it is a linguistic and cultural condition. You are Latin American if you speak a Latin language, and if you live in a country that was a colony of a Latin European country. Just that! You can be Asian and be Latino, you can be Black African and be Latino, you can be whatever you want and be Latino! Latino is what you speak and where you live. Spaniards are Latin people, Italians, French, Romanians, anyone who lives in a Latin culture and speaks a Latin language. I think the concept of "Latino" that Americans have is because most Mexicans who go there are descendants of the natives and that's why they think that's Latino. But no!
If Donald Trump had been born in a Latin country and had grown up there, he would be a Latino!

@Betelgeuse9 uhm no... the word "Latino" is actually used most by US latinos, as in people in the US with Central/South American descent.
That's where the word comes from. If YOU want to put another meaning to it that YOU think would make more sense and a better use of the familiarity to the word "latin" then that's on you.
And "Latin America" is used to describe the parts of the Americas that were Spanish/Portuguese colonies.
So in a correct way.
Since the French (for instance) sees themselves NOT as a Latin people but Romance Language speakers.
Not a single person from Martinique for instance, would ever call themselves "Latino". Whereas a LOT of people in the US from the old Spanish colonies, such as Puerto Rico and Mexico routinely do.
It's not up to YOU what people call themselves.
Even if You're Argentinian.

"... as in people in the US with Central / South American descent ..." How do you identify that a person is from Central America or from South America? because you will be surprised to know that there is no pattern to know it, as I said before, being Latino in Latin America is what you speak and where you live. You can only identify if a person is "a descendant of South America or Central America" ​​as such if that person is a Native American, and that is what Americans erroneously think is a "Latino".

The people of Latin America call ourselves "Latin Americans" and in a short form: "Latinos". The word "Latino or Latina", unlike other languages, has a meaning within Romance languages.


"That's where the word comes from. If you want to put another meaning to that, you would think it would make more sense to use the familiar word "latin" then that's on you. " -As I said, the concepts of the Americans and of us with respect to "Latino" is different and has different meanings, and the American concept is, as you could see, wrong.


The concept "Latin America" ​​was coined for the first time by the French for those parts of America under the Latin culture, and above all: under the Romance languages. "Amerique Latine" was the definition, and it included the French parts except Quebec. You will be surprised to learn that people in French Guyana consider themselves Latinos.
Latin America is a mainly a linguistic condition, and therefore, Latin Americans are such if they speak such languages ​​and live in such places (anthropological definition).
I quote:
"The idea that a part of the Americas has a linguistic affinity with the Romance cultures as a whole can be traced back to the 1830s, in the writing of the French Saint-Simonian Michel Chevalier, who postulated that this part of the Americas was inhabited by people of a "Latin condition", and that it could, therefore, ally itself with "Latin Europe", ultimately overlapping the Latin Church, in a struggle with "Teutonic Europe", "Anglo-Saxon Europe/ America" ​​and "Slavic Europe" .

As for Europe, that is something else. My Italian great-grandfather used to say "We are the true Latinos / Latin people" and my German grandparents refer to the Italians, French, Spaniards, etc. as "Latinos" (Lateinisch). It is true that today such concepts in Europe may no longer be used, but for a long time in the past the term "Latin Europe" ​​was used.
Check this one last time:
https://en.wikipedia.org/wiki/Latin_America
https://en.wikipedia.org/wiki/Latin_peoples

In summary:
Latin America is a linguistic condition (Romance languages) and sometimes cultural, you are Latin American if you speak such a language and have lived or been born there. It is a very real idea, both geographically, politically (Latinamericanism, Simón Bolivar), economic, but not ethnic or racial. It has something to do with "Latin Europe".

The US conjecture about "Latinos" has nothing to do with this and is usually wrong or simply out of place.

What's white on top and black on the bottom?

@Boss154 sadly that is true. it's actually pretty depressing if you think about it ;-;
Amartni

@Amartni It does when you are in prison

PSHH. when I was still an American I could stay outside all day and still come back looking all pale unless I didn't put on enough sunscreen. Then I'd look like a chili pepper. And it's still the same for me in New Zealand.

@potatoe4life As somebody of English ancestry in the southern United States, I understand that completely. At least my family isn't still in Singapore, which is literally on the equator.
HyggeligSara

Sure now Denmark wants to be USA’s friend
Finn123

Soooo... are any of you actually from America??? We don't really care that we're becoming darker. I don't know a single person who does, but hey people always like to generalize with the crazy minority, because a tolerant white person goes against the narrative that they would have you believe

@extrasolarish Right, because this comic is *totally* supposed to be a serious and in depth portrayal of the nuances of each country's.......oh wait.

Sincerely,
An American who can take a joke.
Violetta

Have you noticed how often Denmark is the butt of these jokes?

Being Danish (as is the author), I get my greatest chuckles viewing how my country is portrayed on this comic It's horribly skewed, of course, but the sad truth is that there is usually at least a kernel of truth involved, a minority that makes the rest of us look bad.

Each comic about Denmark's less desirable traits makes me laugh, so why are you taking it so personally?
Add comment: Please Sign in or create an accout to comment.