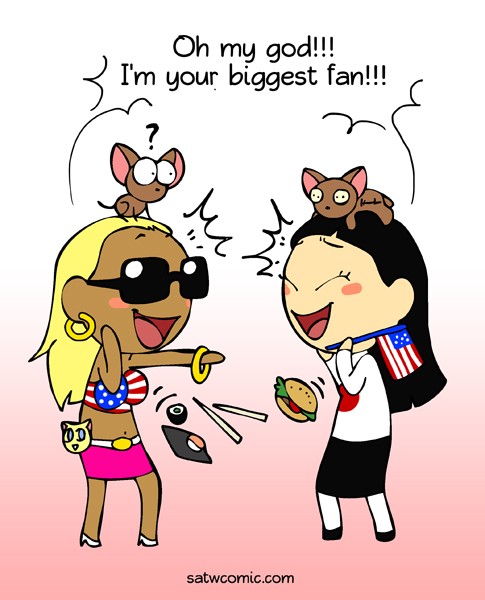 I talked to a Japanese woman who told me that when she went to USA everything felt so familiar because they watched so many American movies in Japan and she almost felt at home, but when she went to Europe she had no idea what to do with herself.

You can all blame the Faroe Islander Boyishy for this one. All I can say is, you have to watch your mouth when you talk with me.

Originally Sweden and Åland were involved too, but I decided to break the idea into two comics.

Anyway, the Faroe Islands is the most religious part of the Nordics and the one with fewest gay rights (Gay sex is allowed, but not gay marriages and adoptions, and registered partnerships are not recognized)

Not all straight Faroe Islanders are of course religious and/or against homosexuality, and it’s nowhere near as bad as some of the middle eastern countries, so don’t get the wrong picture. Unfortunately some politicians with very religious views are in charge (One wouldn’t go to a dinner with Iceland’s lesbian prime minister who had brought her wife with her).

But no one is that homophobic without being in the closet... ;) 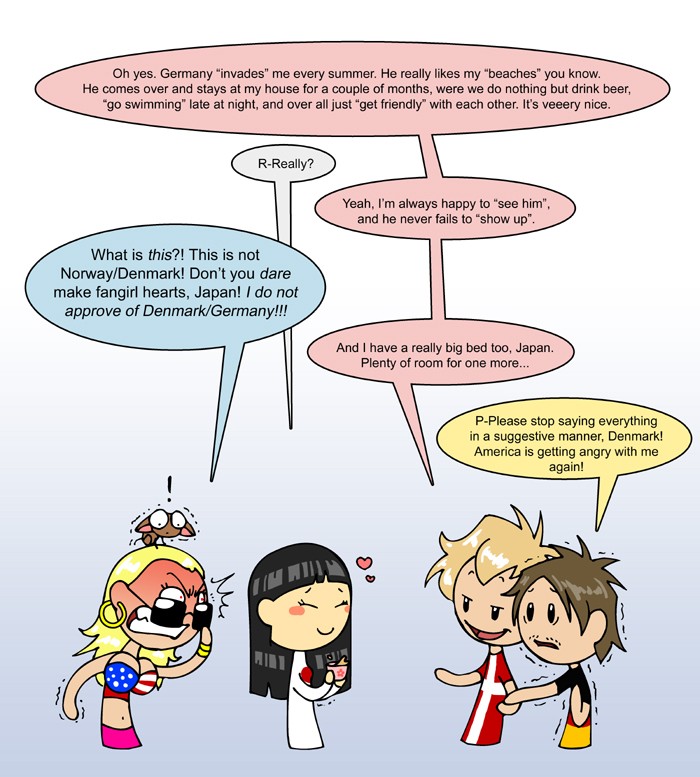 All that just to try and pick up Sister Japan.

A silly idea that didn’t deserve an entire comic.

I was talking with a German girl about how more than half of Denmark’s tourists are from Germany, and that something like 70% of the people who rent summer houses here are Germans. And if we don’t get as many Germans as usual, we start to worry we did something wrong and that the Germans no longer like us.

She said, “Aw, don’t worry. We just need to see other countries every now and then, but Germany will always love Denmark.”

And the most natural response was of course, “Don’t tell Sister America that. It does not work with her Norway/Denmark ship”

Lately a lot of people have drawn their versions of Sister Japan, so I thought it was about time I introduced her before too many people got disappointed that she doesn’t look as awesome as they imagined.

She’s very polite and quiet, but underneath it all she is quite the fangirl.

Belgium is well known for it’s comics and candy/deserts, so he is a geek with a sweet tooth.