I’ve been wanting to make this comic for a long time, but couldn’t figure out who Sweden should be with. Åland, you saved my day!

Only problem is, Sweden is also one of the least religious countries in the world, so he doesn’t really care.

In fact, the latest top five over the least religious countries in the world looks like this:
1.Estonia
2.Sweden
3.Denmark
4.Norway
5.Czech Republic

We’re not big on religion in the North.

See more of Sweden America Aland
17th of May 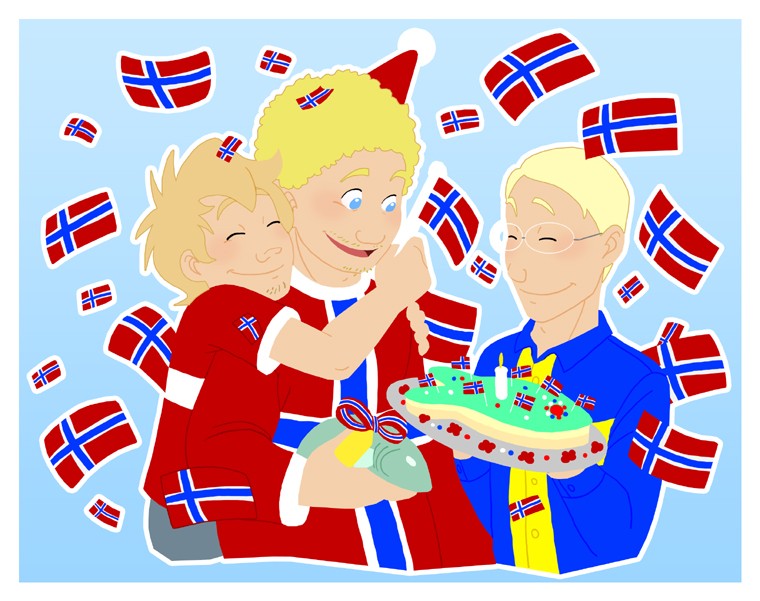 Today is the day when Norway yelled a big fat ”Screw You!” to Denmark and Sweden and got his own constitution.

No country celebrates it’s independent day like Norway. You Americans may think you do a pretty good job a celebrating yours, but you’ve got nothing on Norway. This is what May 17 looks like in the land of the midnight sun http://www.deviantart.com/users/outgoing?http://gulaykocbay07.files.wordpress.com/2008/05/norge.jpg Lots of flags and national costumes.

Like my Norwegian co-worker ones said, “You stand around in your national costume that is way too hot and sings songs louder than you would ever dare on a normal day, and yet you feel so proud”

The Danish radio station I listen to at work celebrated it by playing Norwegian music all morning.

PS: Yes, that cake does indeed taste like fish, because that is how Sweden makes food. Norway loved it, and Denmark just ate buns. 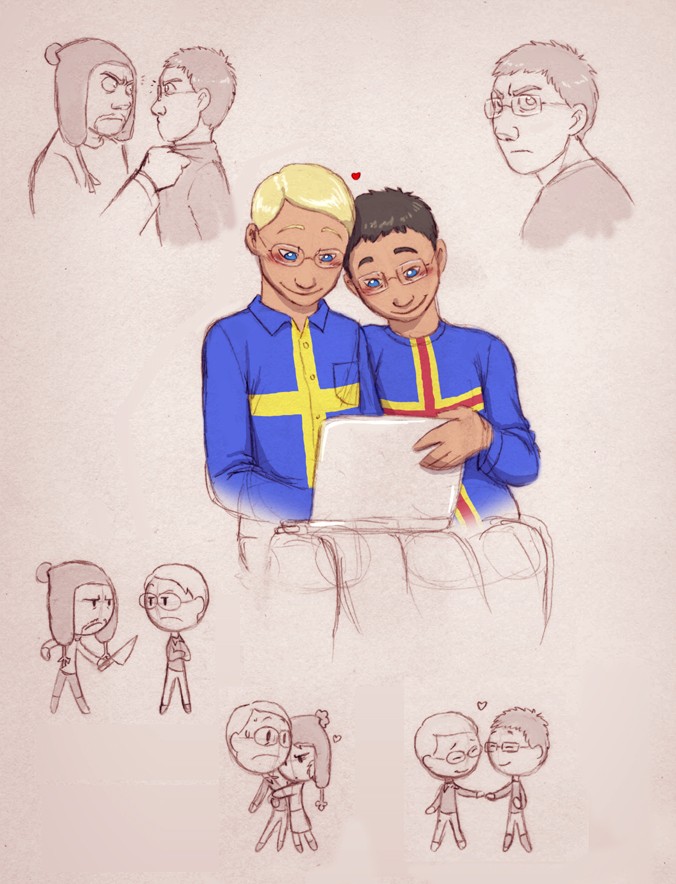 Sweden may have a...tense relationship with Finland, and be in a relationship that is not entirely consensual on his part with Sister Finland, but there is one from the Suomi family that he likes: Finland’s cousin, Åland.

There was a time when the whole Finland family lived with Sweden, but when he lost the war to Denmark and Russia, he had to give up Finland to Russia and Åland moved with him.
When Finland became his own country, he made Åland move in with him, despite Åland’s protests. He always liked Sweden better to a point where he talked Swedish. He wanted to move back in with Sweden, and Sweden wanted him back, but Finland said no.
Åland tried a few times to go back to Sweden, but Finland kept getting between them, but ended up at least letting Åland have his own house (autonomous region). To show whom his heart really belonged to, Åland chose a flag that resembled Sweden’s more than Finland’s.

Such is the love story of Sweden and Åland.

Heh, people kept asking me to do something with Åland, and most suggested that he would be an adopted child of Sweden and Finland, but as you can see, that wasn't what sprung to mind when I read about the islands. ;)

So I tried to make Åland look like he was related to Finland, but had a personlity closer to Sweden.

See more of Finland Aland Sweden
16th of May

A stupid little comic inspired by a comment saying that Finland had to be sick if he was freezing that much in this picture http://humon.deviantart.com/art/Bedtime-Drama-163781923

As I’ve mentions quite a few times, I used to work at a hospital, and the doctors often said that the best way to check for a fever was with a anus-thermometer. So Sweden wasn’t just out to mess with Denmark when he said that.

See more of Sweden Denmark Finland
14th of May 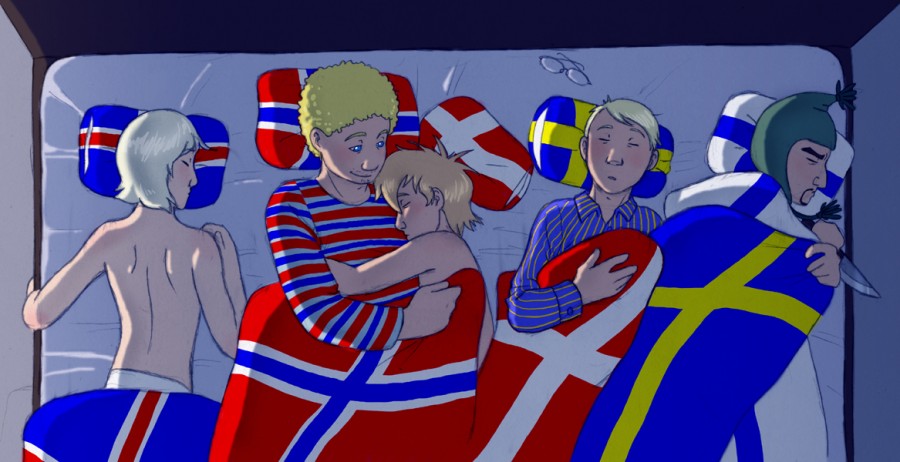 Normally they have their own houses, but every now an then they spend a few days at The Nordic House where they have their meetings. Here everything can turn to drama, including sleeping.

Norway went to bed first, and Denmark followed shortly after. Then came Iceland who had had a crappy day, so he didn’t feel like sleeping next to Denmark. Sweden who had been watching the news on TV finally crawled into bed, not really caring who he ended up next to. Finally came Finland who had been out drinking in the forest, and had only just found his way back home. He was rather dismayed that he would have to sleep next to Sweden and briefly considered just sleeping on the sofa, but decided that it was too cold to sleep alone. Instead he placed himself at the very edge of the bed, with his back to the others.

At some point doing the night Sweden realized Denmark was butt-naked. He suddenly felt very uncomfortable lying next to him, so during the night he moved closer and closer to Finland, away from Denmark. Finland had been freezing, sleeping so far away from the others, so in his sleep he grabbed Sweden’s duvet. That meant Sweden started to freeze, so he ended up getting hold of Denmark’s duvet instead. Denmark, being the pervert he is during his waking hours, went for body-heat, which woke up Norway. He was used to Denmark being clingy, so he just covered him with his own duvet and went back to sleep.

Iceland, being the guy with “ice” in his name, happily slept though it all, and was lucky enough to get up for his morning run before the rest woke up and the morning "how the hell did you end up with my duvet!?" drama started.

Yes, I thought of all that while drawing this. 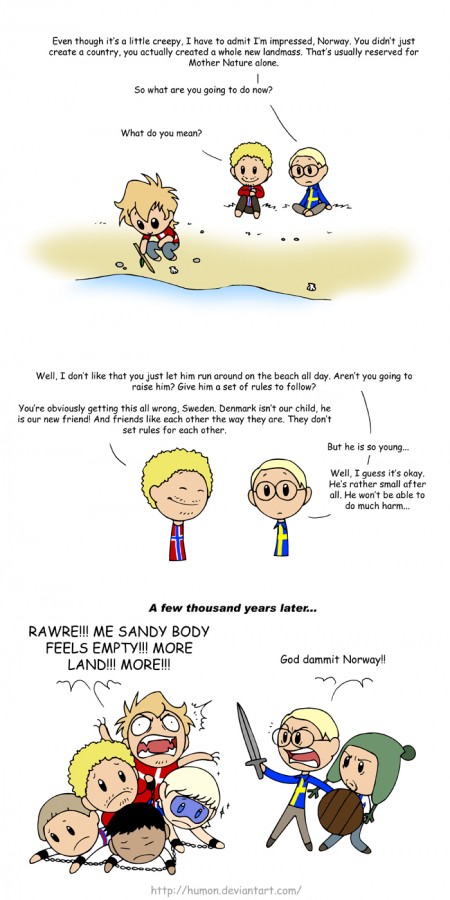 They grow up so fast

If only Norway and Sweden had known how much trouble Denmark was going to be when he grew up...

Because Denmark is made of sand from Norway, that means we have no natural resources. That is the main reason why Denmark went crazy and was so obsessed with taking over the other Nordic countries.

And you have to be impressed. Look up Scandinavia on a map. Can you even imagine that the tiny little Denmark ended up ruling over Norway, Sweden, Finland, Iceland, Greenland, The Faroe Islands and even part of Germany?

Usually when people send me information and fun facts about the world, it’s about something current. But yesterday I was told that Denmark is made of sand that was pushed down from Norway during the ice age, and thought it would make an oddly cute comic.

It is often said that Norway and Denmark have a long history together. Apparently it’s longer than we usually think.

See more of Norway Sweden Denmark
7th of May

A silly little follow-up to this http://humon.deviantart.com/art/Hetalia-Personality-Swap-162801366

What Sweden fails to realize is that he is the last person in the world Finland would want to know about this.

See more of Sweden Finland
4th of May 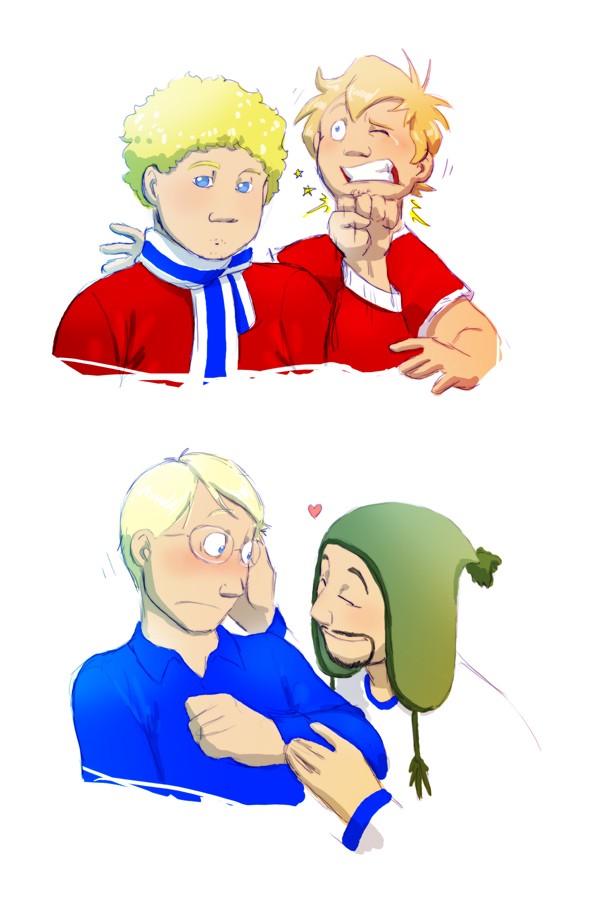 See more of Norway Denmark Sweden Finland
3rd of May 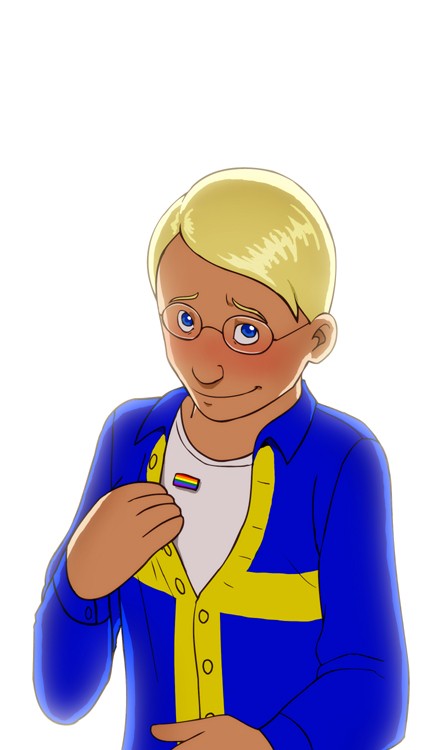 I actually sketched this out back when Sweden legalized gay marriage, but for some reason I never finished it.
It originally had a little comic ending with this, where Norway accused Sweden of being homophobic (In Norway Swedes are stereotypically seen as homophobes, much like Danes are seen as racist).

And I am now told Finland is getting ready to legalize gay marriage as well, and when that happens I have a cute little idea for a comic that all Swede-hating Finns will hate.

See more of Sweden
2nd of May