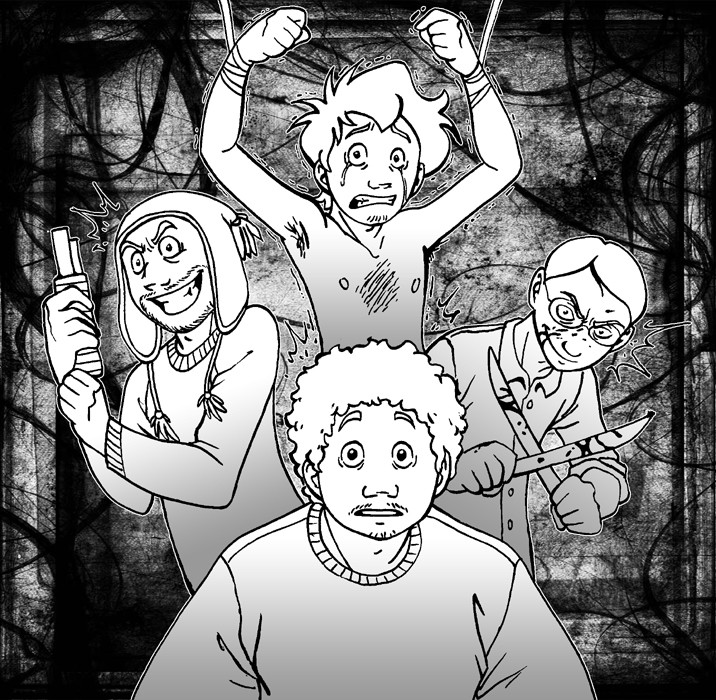 Four of the Nordic boys in the roles of these guys http://www.youtube.com/watch?v=NH3xiUUM2GQ

The video is a trailer for a non-existing TV series about four old friends, a Norwegian, a Swede, a Finn and a Dane meeting up to play Kim's Game (The game where you put a cloth over some things, then a person removes one thing while the others look away, and then they have to guess what is missing). The Swede complains that it’s childish, so the Norwegian suggest they play the grown up version where you have to remove something from the other person’s life (like a car or money).
The ending result is the Swede and the Finn going crazy, kidnapping the Dane to remove him from the Norwegian’s life, and then removing...something from the Dane's life in the process, and well, it all goes to shit from there.

I almost made Denmark yell, “Noooorway!!!” because the Dane in the video keeps calling the Norwegian’s name over and over and over. In fact, he doesn't say much else.

Yes, it’s from a Norwegian comedy show. Isn’t that lovely...

Sweden and Denmark have fought each other for as long as anyone can remember and holds the record for most wars fought between them. Yes, we even beat the two big enemies of Europe, England and France.
So is it any wonder we make fun of each other today? Heck, it’s a miracle we even refer to each other as “Nordic brothers”.

And what did we fight over? Well, mainly Norway, occasionally Scania, and every now an then Denmark tried to take over Sweden. Fun times, fun times.

There’s no point to this. I just wanted to make a comic that had Finland, Sweden and Åland’s characters bouncing off each other.

This comic could have gone on forever, but I had to restrain myself. In my head Finland and Åland’s fight just keep escalating without any of them really getting hurt, and it ends with all of them drinking coffee together because Sweden timed it perfectly.

This may seem rather random, but it’s actually a commentary on how differently Norwegians and Swedes are treated in Denmark.

I was told a story by a Finn who had heard that Danish and Swedish sounded alike, so he spoke Swedish at a bar when trying to order something to drink. But the bartender just kept ignoring him, and it was only when the Finn said he wasn’t Swedish that he got a beer.

Another story I was told was from a Norwegian. He too was mistaken for a Swede and nobody wanted to give him a beer. When he then explained that he was from Norway he got a beer for free.

Even some Norwegian tourist guides to Denmark says, “A lot of Danes can’t hear the difference between Swedish and Norwegian, so remember to tell people that you’re from Norway. You will get a lot better service”

Behaviour like that is luckily far from the norm, and rather embarrassing when it happens, but it illustrates how Denmark feels about it’s neighbours quite well.

The boys are here dressed as a horrifying mix of various Scandinavian Christmas traditions.

The goat costumes are from the Christmas billy-goat. It’s the oldest Christmas tradition in Scandinavia, and most likely predates Christianity, and is therefore a heathen tradition that was simply absorbed by the new religion in these parts of the world. Usually it’s made of straw http://baeklund-design.dk/julebukke-i-straa but in some families people even dress up as it.

The candles are from Santa Lucia procession http://www.youtube.com/watch?v=i2-Q_ObdE-4&feature A Swedish tradition that has spread to the rest of Scandinavia, though it remains most popular in Sweden where girls from all over the country compete to become the Lucia of the year.

And finally the flags as decoration on the tree is a Danish tradition that started during the Nazi’s time in Denmark where the Danes weren’t allowed to use their flag, and therefore used it as a Christmas decoration. This later spread to the rest of Scandinavia.

In the December calendar picture on http://humoncomics.com/shop/supporter the traditions are separated, with Denmark showing of his beloved Christmas beer, and added Finland as Santa because in Finland they take Santa very seriously, and Iceland with a baby doll in his mouth because in Iceland they have 13 Santas and they don’t just give naughty kids coal, their mother eats them! (The picture isn’t up yet, but will be tomorrow).