Good to see you Australia

Because everybody knows that Australians carry a wombat around in their kangaroo.

I couldn’t decide if I should go with the “All Australians are surfers” stereotype, or if it should be the Crocodile Dundee type, so I decided to mix them.

For gods sake, Sweden! Didn't you know not to touch Finland when you are dressed in drag and he is dressed as demon som hell?!

And you don't have to fear Finland, Denmark. Your problem is Greenland, who is always there, in the dark, waiting for your weak moment...

The funny thing is that this is actually based on real life. One of my bosses is from Norway, and he is usually the one to take pictures at parties and what not. At one point he was supposed to take pictures of some people working outside the hospital, but when I later flipped through the pictures on the camera, there was mainly pictures of a crow jumping around on the lawn and some of a tree standing near by.

The Finnish stereotype is a masculine drunk mute with a knife. I had to read up on this because Denmark don’t have a lot to do with Finland, but when I read the description I knew I had to include him sooner or later.

Icelanders are considered to be more beautiful than other Nordic people. They also see themselves as risk-takers, who love extreme sports, so I gave him some sporty cloth and sunglasses, and little sparkles to emphasise his prettiness.

I've read that when Germans go to America they often get yelled at and called Nazis. Most people here are way beyond that because we live right next to them and see them quite often. Instead our German stereotype is a loud guy with really bad hair and cloth, who loves sausages.
My father’s sister married a German, so I did everything in my power not to make the character look like him.

Everybody can have boobs

Denmark was the first country in the world to turn a transsexual man into a woman.

Yes, Denmark is doing a little beer-opening dance. And no, Sweden is not a fan of man-boobs.

And to the newcomers, “skål” is the Scandinavian word for “cheers”. 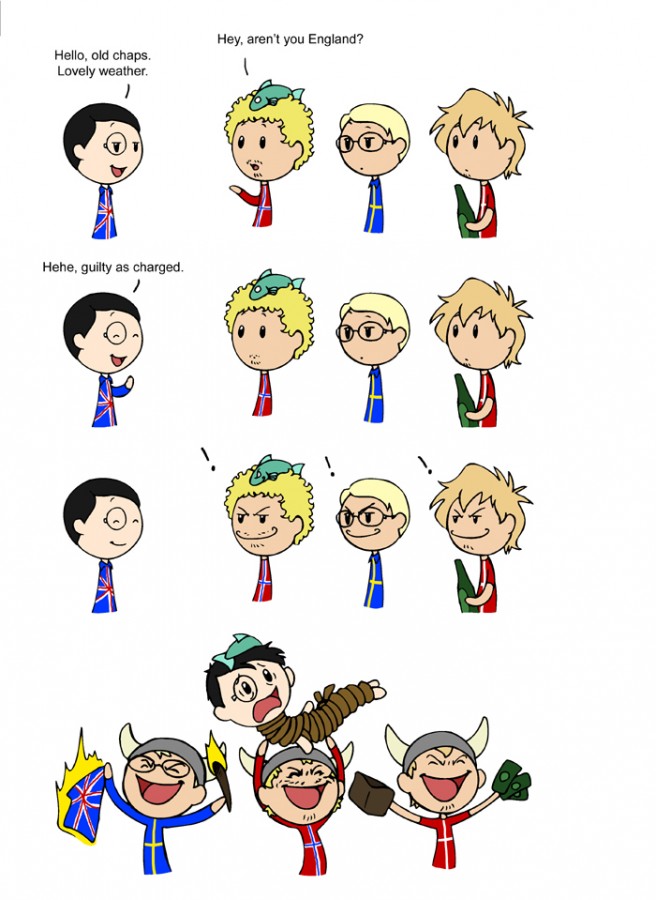 Good to see you England

Oh what fun Sweden, Norway and Denmark used to have with England.